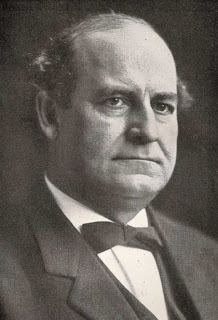 Today is the 152nd anniversary of the birth of William Jennings Bryan, a politician of great prominence in American history.  Bryan was the Democratic Party's nominee for president three times - in 1896, 1900 and 1908 - and he was defeated all three times.  He is remembered for his outstanding oratory and for his role in the famous Scopes "monkey trial" of 1925.

William Jennings Bryan was born in Salem, Illinois on March 19, 1860.  In 1881, he delivered the validectory speech at his graduation from Illinois College in Jacksonville, Illinois.  The young man then studied law at Union Law School in Chicago (now known as Northwestern University School of Law).  While preparing for his bar exam in Jacksonville, he met Mary Elizabeth Baird and married her on October 1, 1884.  The couple had three children: Ruth Baird (born October 2, 1885), William Jennings Bryan Jr. and Grace.

Bryan practiced law in Jacksonville for a few years, but he and his family moved to Lincoln, Nebraska in 1887.  In Lincoln, he became involved in politics and was elected to the U.S. House of Representatives from Nebraska's Ist district in the Democratic landslide of 1890.  After winning re-election to Congress in 1892, Byron became a rising star in the Democratic Party.  He decided to run for the United States Senate in 1894.  His Republican opponent was John M. Thurston, the general counsel for the Union Pacific Railroad.  Although the Republicans won the state Legislature and elected Thurston to the Senate, the campaign provided Bryan with national exposure.

In July of 1896, at the Democratic Convention in Chicago, William Jennings Bryan made one of the most memorable speeches in American history.  His dramatic "Cross of Gold" speech mesmerized the audience at the convention.  His words addressed the controversy at the time concerning the coinage of silver. Jennings supported silver against the Gold Standard and he defended the interests of western farmers over the industrial East.  "Burn down your cities and leave our farms," he thundered, "and your cities will spring up again as if by magic.; but destroy our farms and the grass will grow in the streets of every city in the country. "  He ended his speech by declaring that "You shall not crucify mankind upon a cross of gold," his arms outstretched in the form of a crucified Christ.

At the age of 36, William Jennings Bryan went on to win the Democratic nomination for president of the United States, becoming the youngest person ever nominated for the office.  During the campaign of 1896, he took four major railroad trips and gave stump speeches at every whistle stop.  According to The American Nation: A History of the United States Since 1865, Bryan made over 600 speeches, speaking directly to some five million people.  His amazing energy and his superb oratory, however, failed to win him the election for him.  The Republican candidate, William McKinley, was elected president with 51 percent of the vote to Bryan's 47 percent.

William Jennings Bryan had two more chances to become president, but he was defeated by McKinley again in 1900 and by William Howard Taft in 1908.  After supporting Woodrow Wilson for the presidency in 1912, Bryan was appointed Secretary of State when Wilson assumed office.  He served as Secretary of State during the early years of World War I, before the United States had entered the conflict.   He resigned in June of 1915 in protest over President's Wilson's handling of the Lusitania crisis, fearing that U.S. would be thrust into the war.

On May 7, 1915, the Lusitania, a luxurious British ocean liner, had been torpedoed by a German U-Boat.  Nearly 1,200 passengers and crew were dead, including over 120 Americans.  The Germans claimed that the ship had been carrying munitions and was a legitimate target of war   Wilson, upset by the loss of life and the lack of German regard for freedom of the seas, sent a letter of diplomatic protest to the Germans.  The letter was signed by Secretary of State W.J. Byran.  When Germany's Foreign minister replied that sinking the ship was a valid action, Wilson decided to send another letter of protest.  Bryan refused to sign the second letter, concerned that Germany would break off diplomatic relations with the United States.  As it turned out, the U.S. did not officially enter the First World War until almost two years later, on April 6, 1917.

In the summer of 1925, William Jennings Bryan played a central role in one of the most spectacular trials in American history.  He was a prosecuting attorney in the case of John Thomas Scopes, a 24-year-old high school science teacher in Dayton, Tennessee who had been arrested for teaching the theory of evolution.  In March of 1925, the Tennessee legislature had passed a statute making it unlawful for any teacher in a publicly suported educational institution "to teach any theory that denies the story of the divine creation of man as taught in the Bible, and to teach instead that man descended from a lower order of animals."

Bryan, a believer in the literal interpretation of the Bible, had been asked to participate in the Scopes trial by the Christian Fundamentals Association.  Although he had not set foot in a courtroom for 30 years, he agreed to become a member of the prosecution.  Heading the defence in the Scopes case was 68-year-old Clarence Seward Darrow, America's most celebrated criminal lawyer, and an agostic.

Clarence Darrow was a former labour lawyer who had switched to criminal law.  A staunch civil libertarian with a formidable reputation, it was Darrow who had defended "thrill" killers Leopold and Loeb in their 1924 trial for murdering 14-year-old Robert "Bobby" Franks.  It was he who had saved the two Chicago teengers from the death penalty. 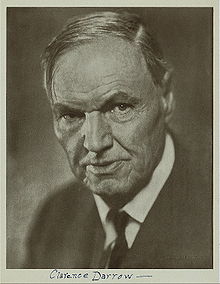 The Scopes trial was dubbed "The Monkey Trial" and it began in Dayton on July 11, 1925.  Over 100 journalists converged on the small town, as well as thousands of curious vistors.  The Chicago Tribune set up its own radio transmission and the trial became the first in American history to be broadcast nationally.  A trio of schoolboys testified that John T, Scopes had indeed taught Darwin's theory of evolution at their school.  Since the judge, John T. Raulston,, would not permit scientists to testify at the trial, Clarence Darrow summoned William Jennings Bryan to the witness stand.  During the cross-examination, the wily Darrow tried his best to make Bryan seem foolish.

The trial lasted for 12 days during one of hottest and driest Tennessee summers ever recorded.  Despite Darrow's efforts, Scopes was found guilty of violating the law and fined $100.  The Tennessee Supreme Court later overturned the conviction on the technicality that the jury, not the judge, should have determined the amount of the fine.  On Sunday, July 26, 1925, only five days after the end of the trial, Bryan died in his sleep during an afternoon nap in Dayton.  He was 65 years old at the time of his death.  Clarence Darrow returned to Chicago where he lived until his passing on March 13, 1938 at the age of 80.  The cause of Darrow's death was pulmonary heart disease.

As for John T. Scopes, he went on to study geology at the University of Chicago.  While doing geological field work in Venezuela, he met and married his wife, Mildred, and was baptized a Roman Catholic.  Scopes eventually launched a career in the oil industry, first in Texas and then in Louisiana.  He retired in 1963 and died on October 21, 1970 at the age of 70.


William Jennings Byran's views cannot be easily labelled or pigeon holed.  He was a certainly a devout Presbyterian and a religious fundamentalist.  His fundamentalism was similar to that of the Tea Party faction of today's Republican Party.  Yet, Byran, if he were alive today, would eschew any association with the Tea Party.  He was a loyal Democratic with some progressive views for his era.

William Jennings Bryan was an outspoken critic of banks and railroads.  His support of women's suffrage helped to pass the 19th Amendment to the U.S. Constitution, guaranteeing American women the right to vote.  He was also a strong advocate of  graduated income tax and the regulation of child labour.  Throughout his life, Bryan campaigned for social and economic justice.  His nickname was "The Great Commoner."


These are the words of Franklin Delano Roosevelt in his speech at a memorial to Bryan in 1934.

It was my privilege to know William Jennings Bryan when I was a very young man. Years later both of us came to the Nation's capital to serve under the leadership of Woodrow Wilson. Through this service and the intimate relations which ensued, I learned to know and to love him.

It was Mr. Bryan who said:

"I respect the aristocracy of learning, I deplore the plutocracy of wealth but I thank God for the democracy of the heart.

"Many years ago he also said: