Valentine's Day 2015: Is there love at first sight? 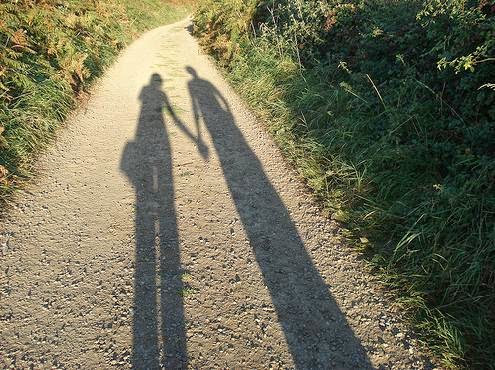 Whoever loved that loved not at first sight?

William Shakespeare
- From As You Like It, Act 3, Scene 5

The above line comes from the Shakespearean comedy As You Like It and the words are spoken by the shepherd Phoebe.  In a case of mistaken identity, Phoebe falls in love with Rosalind who is disguised as man named Ganymede.  Phoebe's comment about love at first sight appears in quotations in the text of the play because its original source is the Christopher Marlowe's poem Hero and Leander.  It is Shakespeare's tribute to Marlowe, a man who greatly influenced him.  Below is an excerpt from Marlowe's Hero and Leander.

It lies not in our power to love or hate,
For will in us is overruled by fate.
When two are stripped, long ere the course begin,
We wish that one should love, the other win;

And one especially do we affect
Of two gold ingots, like in each respect:
The reason no man knows; let it suffice
What we behold is censured by our eyes.
Where both deliberate, the love is slight:
Who ever loved, that loved not at first sight?

Christopher Marlowe was a playwright and poet in Elizabethan England.  He was born in 1564, the same year as William Shakespeare, and was mysteriously murdered in 1593.   His poem expresses the idea that "fate" overpowers "will" in determining matters of love.  It's the notion that love is written in the stars and that we have no control over it

Shakespeare also explores the same notion in Romeo and Juliet.  Remember that Romeo and Juliet are known as the "star-crossed lovers." Juliet would have preferred not to fall in love with Romeo, a Montague, the only son of her worst enemy. In Act 1, Scene 5, when her nurse reveals Romeo's identity to her, she is mortified.  She declares the following:

My only love sprung from my only hate!
Too early seen unknown, and known too late!
Prodigious birth of love it is to me,
That I must love a loathed enemy.

Shakespeare's Juliet feels it is too late to escape the fate of falling in love with the son of her mortal foe.  It cannot be undone.  It is her unalterable destiny.  Romeo, for his part, is immediately becomes lovestruck too, with a person he is supposed to hate.

As St. Valentine's Day nears, it seems appropriate to ponder the question of whether there is indeed true love at first sight.  Can we, like the star-crossed lovers, gaze across a crowded room and instantly lock eyes with our soulmates?

When the moon hits your eye like a big pizza pie, that's amore . . . 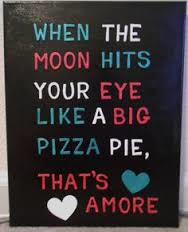 “Colpo di fulmine. The thunderbolt, as Italians call it. When love strikes someone like lightning, so powerful and intense it can’t be denied. It’s beautiful and messy, cracking a chest open and spilling their soul out for the world to see. It turns a person inside out, and there’s no going back from it. Once the thunderbolt hits, your life is irrevocably changed.”

Ah, the lightning!  The flame! The fireworks!  "Love at first sight" is an extremely romantic notion. It is also a very attractive concept.  Think of all the novels and films that have depicted that moment when a couple's eyes meet for the first time - but is that really love?  I don't profess to have all the answers, but I tend to believe that "love at first sight" is really an undeniable connection or an attraction.  It is certainly intense.  It can be more than a physical attraction and it can often develop into true love,. That. however, takes time and nurturing. "Love at first sight" may be the basis for romantic comedies and fairy tales. Real life, however, is quite different.

Sometimes we have a very negative impression of someone at first sight.  Sometimes there is immediate conflict between two persons.  Yet when the ice thaws, they fall in love.  Perhaps that is part of the concept of  the fine line between love and hate.

There is not always a lightning bolt.  Less often, love develops between two people who don't have any strong feelings for each other when they first meet.  Somehow, over time, a flame ignites and they begin to see each other in a different light.


Here are some other ruminations concerning "love at first sight."

- Jennifer E, Smith
From The Statistical Probability of Love at First Sight

The only true love is love at first sight; second sight dispels it.


You see the first thing we love is a scene. For love at first sight requires the very sign of its suddenness; and of all things, it is the scene which seems to be seen best for the first time: a curtain parts and what had not yet ever been seen is devoured by the eyes: the scene consecrates the object I am going to love. The context is the constellation of elements, harmoniously arranged that encompass the experience of the amorous subject . . .


Barthes interest in photography is evident in this second quote on "love at first sight" from A Lover's Discourse: Fragments.

Love at first sight is always spoken in the past tense. The scene is perfectly adapted to this temporal phenomenon: distinct, abrupt, framed, it is already a memory (the nature of a photograph is not to represent but to memorialize) . . . this scene has all the magnificence of an accident: I cannot get over having had this good fortune: to meet what matches my desire.


In closing, I'll leave you with this thought.  I came across these words from an unknown source:

What's so remarkable about love at first sight?  It's when people have been looking at each other for years that it becomes remarkable.

Do you believe in love at first sight?