Come a little bit closer
Hear what I have to say
Just like children sleepin'
We could dream this night away.

But there's a full moon risin'
Let's go dancin' in the light
We know where the music's playin'
Let's go out and feel the night.

From the song Harvest Moon
- Lyrics by Neil Young

To see a video of Neil singing Harvest Moon, click the following link.

I am a moon watcher. The different phases of the moon have always fascinated me and right now I am in the midst of lunar madness. This is the time of the harvest moon, the best full moon of the year. It is the full moon closest to September 21st and the autumn equinox. Last night, I went to the boardwalk at Sunnyside to take a look. It’s a great spot for moon gazing because it’s by the lake and there is a wonderful view of Toronto’s skyline there. The show should be even better tonight. It happens only once a year. Don’t miss it.

Here is a photo I took of the full moon last night at Sunnyside. 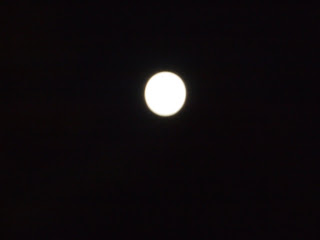 By the way, if you scroll down my web page, you will see various items including one that keeps you up to date with the different phases of the moon. Check it out.

Name a place where love means nothing.

The Blue Jays were defeated yesterday by the Seattle Mariners. The Mariners won by a score of 6-3. Kyle Drabek was the starting pitcher for the Jays and had difficulty throwing strikes. He’s still looking for his first major league win and needs some seasoning. The Mariners have a week offence but they managed to hit two home runs off Drabek.

The Toronto Maple Leafs won their second preseason game against the Ottawa Senators by a score of 4-1 at the Air Canada Centre. The Leafs lost their first exhibition game to these same Senators on Tuesday. It was a 5-1- loss and they were booed off the ice at the ACC. I’ll be writing more about the Leafs in future blog entries. For now, suffice to say, I am not a fan of the Brian Burke/Ron Wilson/Don Cherry style of hockey.