Was Alastair Sim the Best Scrooge?

For a work established in reiteration, it may be invidious to pick out one definitive version (of Scrooge). However, one actor claimed the part in a way that no one else has managed.  In Scrooge (1951), Alastair Sim utterly possesses the role.  He's a man physically framed for the Dickensian world: huge-eyed and hangdog, at once over the top and subtle, sinister and comic . . . In other words, he was born to play Scrooge.  Sim's performance was so definitive, so excellent, that it produced its own reiteration.


Although there will always be dispute over which is Alastair Sim's finest screen performance, there's little doubt as to which is his best known.  His 1951 characterisation of Charles Dickens' notorious curmudgeon Ebenezer Scrooge . . . is generally regarded as definitive.

Alastair Sim did not receive an Academy Award nomination for his performance in the title role of the 1951 British film Scrooge (released in the United States as A Christmas Carol).  At the 1952 Oscars, it was Humphrey Bogart who won the award for Best Actor in a Leading Role for his portrayal of a gruff steamer captain in The African Queen.  It turned out to be Bogart's one and only Academy Award victory and, as a big fan of Bogie, I certainly don't begrudge him the honour.  However, I think a strong case can be made that Sim should have won the award.  At the very least, he should have received a nomination.  Outside of the United Kingdom, he didn't seem to get the recognition he deserved.

Alastair George Bell Sim was born in Edinburgh, Scotland on October 9, 1900, the son of Alexander Sim, a Justice of the Peace and a successful tailor.  Alastar was always interested in language, especially the spoken word.  He was very skilled at poetry reading  and served as the Fulton Lecturer in Elocution at New College, Edinburgh University from 1925 to 1930.  In 1948, he was elected rector of Edinburgh University, a post he held until 1951, after which he was made an honorary Doctor of Law.  While still holding his position at the university, he ran his own drama school for children in Edinburgh.

It was not until he was 30 years old, however, that Alastair Sim launched his professional acting career.  He began performing in London's West End (his first stage appearance was as Messenger in Othello), but it wasn't until he was 35 that he made his film debut.  In the late 1940s and most of the 1950s, Sim was a leading film star in Britain.  Beginning in 1935, he appeared in more than fifty British movies. During World War II, he played Sergeant Bingham in the "Inspector Hornleigh" films," directed by Walter Forde.  His other screen appearances include Green for Danger (1946), Hue and Cry (1947), The Happiest Days of Your Life (1950), Scrooge (1951). The Belles of St. Trinian's (1954) and An Inspector Calls (1954).  In 1950, the year before Scrooge was released, he was voted the most popular film actor in Britain in a national poll.

Ebenezer Scrooge was to become his most memorable role. Nobody played the old miser like Alastair Sim. With his facial expressions, his mannerisms and his wonderful voice, Sim was able to capture the very essence of Dickens' character.  He succeeded in making audiences understand why Scrooge became a reclusive skinflint and also why he was able to find redemption. Some details of Scrooge's early life, not mentioned in Charles Dickens' 1843 novella, were added to the 1951 movie, providing some motivation for Scrooge's behaviour.  During the sequence with the Ghost of Christmas Past, for example, we learn that his sister died in childbirth, giving birth to his nephew, Fred, which explains Scrooge's animosity toward Fred.  We also learn that Ebenezer's mother also lost her life giving birth to him, causing his father to harbour a grudge against him.

In my mind, Sim is Scrooge and the 1951 film version is the best version.  It's a Yuletide tradition with me.  I watch it every year at Christmastime and never tire of it.  It should be watched in its original black and white for maximum enjoyment. A colorized version of the film was released in 1989 and is included on many DVDs as an extra.  However, the black and white contrast better reflects the misery and poverty of Victorian London during the Industrial Revolution.  It makes the ghosts far more frightening. 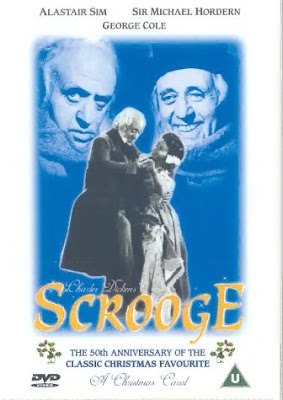 The film provides a wonderful adaptation of Dickens' story in a concise 87 minutes, thanks to the screenplay by Noel Langley and editing by Clive Donner.  Its cinematography, lighting and musical score are truly superb, as is Alastair Sim's supporting cast, particularly Mervyn Johns as Bob Cratchit, Michael Hordern as Jacob Marley and Kathleen Harrison as Mrs. Dilber, Scrooge's long-suffering housekeeper.  One of the most unforgettable scenes in the film occurs near its finish, when Mrs. Dilber encounters a deliriously happy reformed Scrooge.  She does not no what to make of his behaviour and is confused and frightened.

In 1951, United Artists released Scrooge in the United States, under the title A Christmas Carol.  The film was originally scheduled to be shown at Radio City Music Hall in New York City for Christmas.  However, theatre management deemed it too gruesome and the showing was moved to a nearby theatre instead.  The film received mixed reviews in the United States and it was a disappointment at the box office.  On the other hand, it was one of the most popular films in Britain in 1952.

Some great actors have played the role of Ebenezer Scrooge in other film versions of Charles Dickens' Christmas classic.  The first sound version, a 1935 British version directed by Henry Edwards, features Seymour Hicks as Scrooge. Other actors who have played Scrooge include Reginald Owen in A Christmas Carol (1938), Albert Finney in a musical entitled Scrooge (1970) and George C. Scott in a CBS made-for-television movie called A Christmas Carol (1984).  The latest actor to portray Ebenezer Scrooge is Christopher Plummer in the film The Man Who Invented Christmas (2017).  It is the story of how Charles Dickens came to create Scrooge and the other classic characters in A Christmas Carol, such as Tiny Tim.  I've seen it and I enjoyed it immensely. 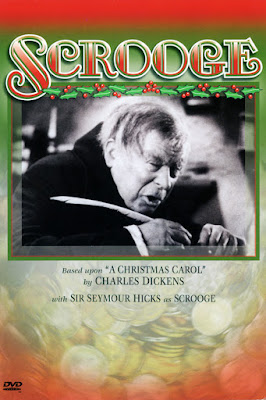 My favourite Scrooge, Alastair Sim, died of lung cancer on August 19, 1976.  He was 75 years old at the time of his passing in London, England. Sim left a magnificent legacy. on film.  Every year at Christmastime, it is my custom to watch the Sim play Scrooge.  I never grow tired of this timeless Yuletide tradition and it never ceases to delight me.

* Alastair Sim married actress Naomi Plaskitt in 1932.  They remained together until his death in 1976.  They had one daughter, Merlith.  After his death, Plaskitt published a memoir, Dance and Skylark: Fifty Years with Alastair Sim, in 1987. She also wrote articles for Oldie magazine.

Naomi was born November 30, 1913 in Bedfordshire, England, but spent her childhood mainly in Scotland.  According to her obituary in The Guardian, she first met Alastair in 1926 when she was only 12 years old. They met at a rehearsal for an amateur production of W.B.Yeat's The Land of Heart's Desire, organized by the Scottish Community Drama Association.

Naomi died in England on August 3, 1999.at the age of 85.  She and Alastair appeared in one film together, Wedding Group (1936).  She played the role of a maid in a Scottish manse and Alastair portrayed the minister. 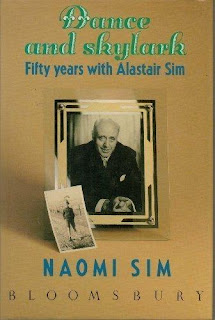 * In 1953, Alastair Sim was appointed to the Order of the British Empire.  However, he refused knighthood in the early 1970s.