Evelyn Dick and the Torso Murder 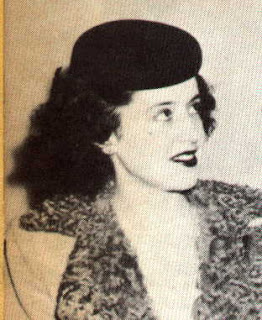 Aside from Karla Homolka, Evelyn Dick, the "torso murderer" of the 1940s, is perhaps the most notorious woman in Canadian history.  Journalist Paula Todd, however, was able to locate Homolka on the Caribbean island of Guadeloupe where the convicted killer resides with her husband (the brother of her long-time prison lawyer) and their three children.  Unlike Homolka, Evelyn Dick's fate is shrouded in mystery.  If she is still alive her whereabouts are unknown to the public and she would be 92 years old.  If deceased, the details of her death are also unknown.

Let's go back to Hamilton, Ontario on March 16, 1946.  On that day, a group of  children discovered a dismembered body laying part way down the side of the Niagara Escarpment (referred to as "The Mountain" by Hamilton residents).  It turned out to be the torso of an adult male whose head, arms and legs were nowhere in sight.  With the help of doctors and a positive identification from a brother-in-law, police were able to identify the remains of 40-year-old John Dick.  His estranged wife, Evelyn, was suspected of involvement in the gruesome murder.

Evelyn Dick was worn in Beamsville, Ontario (near Niagara Falls) on October 13, 1920.  Her parents, Donald and Alexandra MacLean, moved the family to Hamilton where Donald found employment as a streetcar conductor with the Hamilton Street Railway Company.  He later secured an office job with the company and used his position to pilfer from the company.  Young Evelyn enjoyed hosting parties and she had a reputation for spending money lavishly on items such as jewellery and furs.  She always seemed to have a steady supply of cash.

In 1942, Evelyn gave birth to a daughter.  She claimed to be married to a soldier stationed overseas whose last name was `White."  Mr.  White`s existence, however, was never proven.  The baby, Heather White, was mentally disabled and required a great deal of care from her mother and grandparents.  The following summer. Evelyn gave birth to a stillborn child.  Then, on September 5, 1944, her son, Peter David White, came into the world.  It has never been clear who fathered these children.

By June of 1945, Alexandra MacLean had separated from her hard-drinking husband and moved into downtown Hamilton apartment with daughter Evelyn.  Not long after, Evelyn shocked her mother by announcing that she intended to marry someone named John Dick, a streetcar driver for the Hamilton Street Railway, in two weeks` time.  Alexandra was not even aware of the existence of a man by that name in her daughter`s life.

Nevertheless, on October 4, 1945, Evelyn married Dick, a Russian immigrant 14 years her senior.  The marriage was a sham and the couple did not even live together most of the time.  When John disappeared, he was living with his cousin, Alexander Kammerer.  It was Kammerer who reported John missing since March 6, 1946.

Soon after the identification of John Dick's remains, Evelyn was taken to police headquarters for questioning.  She reacted to the news about her husband by declaring, "Don't look at me.  I don't know anything about it."  She then told a tale about a Mafia hitman who had been looking for John. The police did not believe her story because hard evidence proved otherwise.  There were bloodstains on the upholstery of a car Evelyn had borrowed that matched John's blood type and bits of human bones were discovered in the backyard of her home.  On March 19, 1946  three days after the discovery of her husband's torso on Hamilton Mountain, Evelyn Dick was arrested.

Several week later, during the investigation of John Dick's murder, another grisly discovery was made.  The body of Evelyn's baby son, Peter David White, was discovered in an old suitcase enclosed in cement in the attic of her home.  Evelyn then made statements implicating herself, her lover William Bohozuk and her father Donald MacLean in the murders.  The trio all faced murder charges.

In October of 1946, Evelyn Dick's case came before the courts.  The sensational "black widow" murder trial was front page news and scores of people congregated outside the courthouse during the proceedings.  It is interesting to note that  prominent Hamilton lawyer John J. Sullivan, who defended Evelyn during her first trial, would later run unsuccessfully for the leadership of the Ontario Liberal Party in 1950.  After nine days of testimony, however, the jury quickly delivered a guilty verdict.

On January 7, 1947, Evelyn was sentenced to death by hanging for the murder of her husband.  Famed lawyer J.J. Robinette appealed her case and won an acquittal for his client on the basis that Evelyn's statements to police were improperly admitted into evidence and that the judge had not provided the jury with proper instruction.  In 1947, Evelyn went on trial for murder again.  This time she was found guilty of manslaughter in the death of her baby son and sentenced to life in the Kingston Prison for Women.  Her father was sentenced to five years for being an accessory to murder.and Bill Bohozuk was acquitted because Evelyn refused to testify at his trial.

In 1958, after serving 11 years in prison, Evelyn Dick was paroled.  Ales Edmison,, a senior member of the National Parole Board, provided her with a new identity because he thought she was entitled to a fresh start.  To this day, Hamiltonians never tire of speculating about what happened to the infamous Mrs. Dick after she was released from the Kingston Penitentiary. According to Jeff Mahoney in his October 17, 2011 article in the Hamilton Spectator, the most accepted version of Evelyn's fate appears to be that she settled in London, Ontario or Kitchener.  Mahoney stresses , however, that her exact location has never been pinpointed although there have been reported sightings of the evasive woman.

According to the late journalist Brian Vallee in his 2001 book, Torso Murder: The Untold Story of Evelyn Dick, Evelyn married a well-to-do man who was never learned of her true identity.  She relocated to Western Canada where she was able to elude private detectives and the press in their attempts to track her down. Vallee, who never met Dick, obtained his information from third parties and go-betweens.

In a March 15, 2005 article by Charlie Gillis in Maclean's magazine, Vallee is quoted as saying, "Evelyn had the help of everyone in power keeping her secret."   "These days, he told Maclean's, "police go around advertising when an offender's about to get out of jail."

I  can't help wondering what would have happened if Evelyn Dick had been released from prison in 2013 rather than 1958.  With modern technology and social media, it would be extremely difficult for her to remain hidden from the public eye. She certainly would not have been able to vanish as she did.