Mitt Romney would not be moderate! 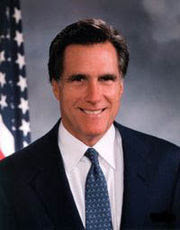 "There are 47 percent of the people who will vote for the president no matter what. All right, there are 47 percent who are with him, who are dependent upon government, who believe that they are victims, who believe the government has a responsibility to care for them, who believe that they are entitled to health care, to food, to housing, to you-name-it -- that that's an entitlement. And the government should give it to them. And they will vote for this president no matter what. ... These are people who pay no income tax. ... [M]y job is not to worry about those people. I'll never convince them they should take personal responsibility and care for their lives."


Mitt Romney, the Republican candidate for President of the United States, said those words and he meant them.  He can't pretend otherwise.  He can't just shrug them off and say that everybody says the wrong thing sometimes.  Those words reveal the true mindset of the Republican Party. They should not be forgotten by the American electorate.  Romney and the Republican Party should be called into account for their dismissal of 47 percent of the American populace.  Since the population of the United States is about 311.6 million people, they have written off a lot of their fellow Americans.

Don't be fooled, my American friends, by Mitt Romney's professed moderation during the first presidential debate.  He has flip-flopped on so many issues that it is difficult to gauge where he really stands, but as governor of Massachusetts, Romney introduced a health care plan similar to President Obama's Affordable Health Care Plan.  He seems more moderate than his libertarian running mate, Paul Ryan of Wisconsin, but that's not saying much.  It's an indication of how far to the right Republicans have veered.  Even if Romney wanted to be more moderate, his hands are tied.  The Republican Party has effectively been hijacked  by  extreme right-wingers.  The Tea Party is in control and Romney must do their bidding.  He is beholden to them and to the wealthy corporate interests that fund his party.  If he becomes president, he will do their bidding.  He will continue to cut taxes for millionaires and billionaires, thus increasing the deficit.


Mitt Romney chose Congressman Ryan, an avowed admirer of the Ayn Rand's school of thought, as his vice-presidential running mate in order to appease the Tea Party, the dominant faction of his party.  The choice of Ryan simply confirmed what was already obvious: the Tea Party is in control of the Republican Party.  Its goal is to completely redesign America in its own fashion.  The rich will get richer.  The middle class will collapse and the poor will suffer even more.  Trickle down economics does not work in difficult economic times. How many companies are prepared to hire new employees if they fear that consumers will not buy their product?

My American friends, before you cast your vote on November 6th, remember that the Paul Ryan budget that he supported in Congress is the same budget that was adopted by the Romney-Ryan campaign.  Do not forget that the Ryan budget would destroy Medicare as you know it for seniors and transform it into a voucher program.  Seniors of America, I ask you, do you want Medicare or do you want Voucher Care?

By the way, I have just finished reading an Associated Press story revealing that VP candidate Paul Ryan sought federal funding for his Wisconsin constituents, the same government handouts that he is so quick to criticize.  According to newly released documents (8,900 pages of correspondence between Congressman Ryan's congressional office and 70 executive branch agencies), Ryan sought food stamps stimulus money, federally guaranteed business loans , grants to invest in green technology and money under Obama's heath care reform law.  The Associated Press obtained the documents under the Freedom of Information Act.

As a Canadian, I don't have a vote on November 6th.  For you, America, the choice is abundantly clear.