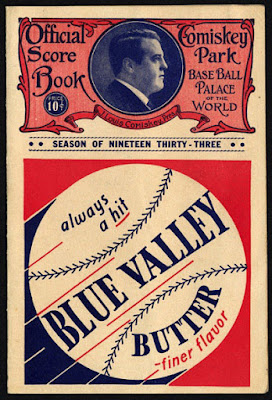 The 86th Major League Baseball All-Star Game will be held today.  The 2015 festivities, hosted by the Cincinnati Reds and the City of Cincinnati, will soon be underway at the Great American Ball Park.  It seem most appropriate, therefore, to take a trip back in time to the very first All-Star Game.  So let's do it!

Baseball fans, it is July 6, 1933 and we are headed to Comiskey Park in Chicago Illinois to watch the "Game of the Century," as it is being billed.  Before we arrive, though, here is some background information that you should really know.

* If you think times are tough now, remember that we are in the depths of The Great Depression. Franklin D. Roosevelt has just become President of the United States with promises of better days ahead and a New Deal for the Forgotten Man.  Remember that in the early 1930s, baseball served as a welcome distraction in the midst of terrible hardship and economic turmoil.

* You'll notice that "The Century of Progress Exposition" is being held in Chicago during this summer of 1933.  Chicago Mayor Edward J. Kelly had wanted to arrange a sporting event to coincide with the World's Fair, so he shared his idea with Col. Robert McCormick, the publisher of the Chicago Tribune. McCormick immediately called upon Arch Ward, the Tribune's sports editor, for his input on the matter. Ward suggested a matchup between the best players in baseball - the American League versus the National League. The sports editor became the driving force in establishing this inaugural All-Star game.  He diplomatically persuaded the AL and NL owners and Major League Baseball itself to accept his idea.

By the 1930's, baseball had already established itself as America's favorite pastime and the national exposition provided the perfect stage to introduce baseball's best to the rest of the country. Many did not believe that a contest of this magnitude could possibly live up to the fan's expectations, especially for those who lived in the far western states and had never been to a major league baseball game.

In the end, Arch’s one “Dream Game” idea was approved by Major League Baseball largely thanks to the economy. As a by product of the Great Depression, with the player salaries cut back, the proposed game was more attractive to the owners and Commissioner (Kennesaw Mountain) Landis.

All parties agreed the game would be played shortly after Independence Day, as western teams would be travelling east on their schedule, and vice-versa. A rainout date was scheduled for the following day.


We've arrived at the ball park.  Here is your ticket to the big game!  Let's buy some popcorn and then we'll take our place in the stands.  We'll join the capacity crowd of 47,495 (according to the Chicago Tribune) to watch the American League Stars take on the National League.  Weather conditions are ideal in the Windy City this afternoon, so let's enjoy the game! 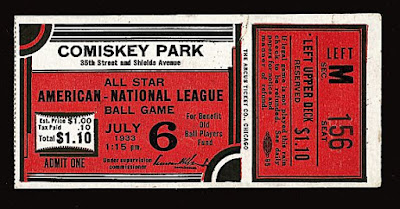 
The pitching matchup is a battle of southpaws. Left-handed pitcher "Wild Bill" Hallahan of the St. Louis Cardinals, takes the mound for the National League.  Lefty Gomez of the New York Yankees is the starting pitcher for the American League.

Look at the rosters for both teams. What a line-up of sluggers!  The American League side.includes famed Yankee first baseman Lou Gehrig, future Hall of Famer Jimmie Fox of the Boston Red Sox, outfielder Al Simmons of the Chicago White Sox and the legendary George Herman "Babe" Ruth of the New York Yankees. 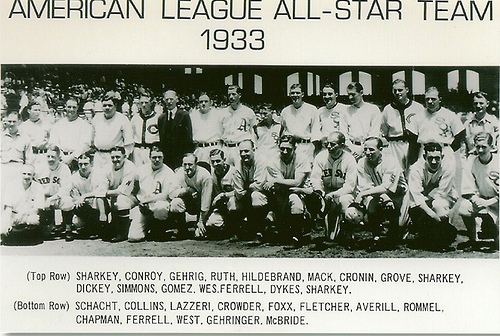 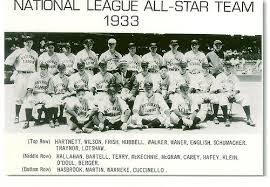 Let's face it though, we are more excited about seeing The Babe than any other player on the field. Even the National League pitcher agrees that the Sultan of Swat is the star attraction.

We wanted to see the Babe. Sure, he was old and had a big waistline, but that didn't make any difference. We were on the same field as Babe Ruth."


The American League takes an early lead, scoring a run in the bottom of the first inning, It's 1-0 for the AL, but there is more to come.

It's the bottom of the third inning.  Babe Ruth is at the plate.  He may be 38 years old and considered past his prime, but The Bambino does not disappoint.  He blasts the ball into the right-field stands, recording the first home run in All-Star history.  The Babe's two-run homer puts the American League ahead by a score of 3-0.

In the top of the sixth inning, with two outs, second baseman Frankie Frisch of the St. Louis Cardinals hits a two-run homer deep to right field. Suddenly, the National League is on the board and the American League's lead is cut to 3-2.   Frisch's homer, however, is too little, too late.  The AL adds another run in the bottom of the seventh inning and the game ends in an AL victory by a a score of 4-2.

* Although the 1933 All-Star Game was originally intended to be a one-time deal, an adjunct to the  "The Century of Progress Exposition," it was so successful that it became a permanent annual fixture for Major League Baseball.  The second All-Star Game was held on July 10, 1934 at the Polo Grounds in New York City, home of the New York Giants.

* My hometown of Toronto, Canada, hosted the All-Star Game back in 1991.  I will soon be time for Toronto to host the game again.