It is not the mountain we conquer, but ourselves. 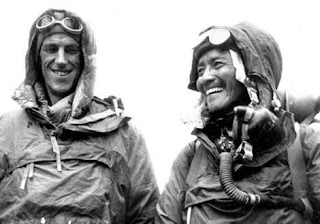 Today is the birth anniversary of the great explorer and mountain climber Sir Edmund Hillary,  He and Sherpa mountaineer Tenzing Norgay made history in 1953 when they became the first persons to reach the summit of Mount Everest, the highest mountain in the world.  How fitting that Hillary was born on July 20th, 1919, exactly 50 years before Neil Armstong stepped onto the moon's surface on July 20, 1969.

In April of 1985, Neil Armstrong accompanied Sir Edmund and others on a flight over over the Arctic.  Armstrong was curious about viewing the North Pole from ground level as he had only seen it from the moon.  Hillary, who had crossed the Antarctic ice fields to the South Pole by snowcat in 1958, was thrilled to add a visit to the North Pole to his list of accomplishments.  Thus, when the twin-engine ski plane landed at the North Pole, Hillary became the first person to stand on both poles and on the peak of Mount Everest.

Edmund Percival Hillary was born in Auckland, New Zealand, the second of the three children of Percival Augustus Hillary and his wife Gertrude, a teacher.  Edmund had an older sister, June, and a younger brother, Rexford.  His father, a veteran of the Battle of Gallipoli in World War I, moved the family to a farm about 64.3 km. (forty miles) south, near the town of Tuakau.  The elder Hillary established a newspaper there called the Tuakau District News.  He served as the paper's managing editor.

Percy Hillary also took up commercial beekeeping. Using the money he received for being a war veteran, he trained to be a beekeeper.  His two sons followed suit.  After two years of studying mathematics and science at the University of Auckland, Edmund joined his brother Rex in pursuing the same occupation as their father.  Since beekeeping was seasonal, it allowed young Ed the freedom for mountain climbing during the winter.

Edmund's interest in mountain climbing was sparked by class visit to Mount Ruapehu in the Southern Alps (the highest point on New Zealand's North Island) when he was a 16-year-old in high school.  In 1939, he made his first major climb and succeeded in reaching the summit of Mount Ollivier in the Canterbury Region of New Zealand.  That same year the family moved to Auckland and Percy established a monthly magazine for beekeepers.  It was called New Zealand Honeybee.

During World II, Hillary served in the Royal New Zealand Air Force as a navigator.  In 1945 he was sent to Fiji and to he Solomon Islands where he was severely burned in a motor boat accident.  After the accident, he returned home to New Zealand and convalesced in the Southern Alps.  During this period of recuperation, he found a mentor in Harry Ayres, New Zealand's most prominent mountain climber at the time.

After the war, Ed Hillary resumed mountain climbing.  He climbed the Swiss Alps in 1950 and became acquainted with British mountaineers who had had experience in the Himalayas.  They taught him alpine and ice climbing techniques.

In 1951 Ed participated in a New Zealand expedition to the Himalayas and built a reputation as a skilled mountain climber. He became more and more determined in scale Mount Everest, the Himalayan peak on the Nepal-Tibet border.  Almost a century before, British surveyors had determined that Everest was the highest point on earth.

There had been many attempts to conquer Mount Everest. but no one had ever reached its summit.  Several experienced climbers, including Sherpas (the Nepalese people renowned as mountaineers) had died in avalanches or had become frozen or lost in storms. One of them, George Leigh Mallory, an Englishman, had gone missing in 1924.  His body was found in the ice 75 years later in 1999.  When asked by a New York Times reporter why he wanted to climb Mount Everest, it was Mallory who had famously replied, "Because it's there!"  At least he was quoted as having said that in the Times.

In 1953, Hillary took part in a Royal Geographical-Alpine Club Expedition led by Colonel John Hunt.  This British expedition consisted of more than 400 people, including several Sherpa guides.  One of those Sherpa guides was 39- year-old Tibetan-born Tenzing Norgay.

The expedition's route was the perilous South Coul, facing Nepal.  Co-ordinated teams tried to advance to higher and higher camps on the icy slopes.  The team of Tom Bourdillon and Dr. Charles Evans were the first to try to reach the summit.  They came within 300 vertical feet (91 m) but were forced to turn back due to exhaustion, an ice storm and oxygen tank failures.

Colonel Hunt then directed the team of Edmund Hillary and Tenzing Norgay to make the next attempt to conquer Everest.  They set out on May 28, 1953.  On the morning of May 29, 1953. Hillary, 33, woke up to find his boots frozen solid outside their tent.  He spent some time warming his footwear before he and Norgay made the final ascent.  At 11:30 a.m., they reached the top of the world.

Hillary and Norgay spent about 15 minutes at the summit.  Their celebration was fairly modest.  According to Sir Edmund, they "shook hands and then, casting Anglo-Saxon formalities aside, we thumped each other on the back until forced to stop from lack of breath."  Norgay, a Buddhist, buried biscuits and chocolates as an offering to the gods of Everest.   Hillary snapped some pictures, including a well-known photo of Norgay posing with his ice-axe.  No photos were taken of the lanky New Zealander, however, because Tenzing had never operated a camera and Hillary was not about to teach him on the summit of Mount Everest.  After eating some mint cake, the two men strapped on their oxyen tanks and began their descent.

The first person they met was Ed Hillary's friend and fellow New Zealander, George Lowe, who had climbed up to meet them with a thermos flask of hot tomato soup.  Lowe, an experienced mountaineer, was also a member of the Hunt expedition.  Upon greeting Hillary, Lowe asked, "Well, how did it go?"  Hillary replied, "Well, George, we knocked the bastard off."

The conquest of Mount Everest coincided with the coronation of Queen Elizabeth II on June 2, 1953 in London's Westminster Abbey.  News of the achievement reached Britain on the day of the coronation.  The press described the successful climb as a coronation gift.  Hillary and Norgay received international acclaim.  On June 6, 1953, Edmund Hillary and Col. John Hunt were knighted by the young Queen Elizabeth.  Tenzing Norgay was awarded with the prestigious, but undeniably lesser British Empire Medal.


Three months after climbing Mount Everest, Edmund Hillary married Louise Mary Rose, the daughter of a mountain climber, on September 3, 1953.  The couple had three children: Peter (born December 26, 1954). Sarah (born 1955) and Belinda (born 1959).  Tragedy struck the Hillary family in 1975 when Sir Edmund's wife Louise and their 16-year-old daughter Belinda were killed in a plane crash soon after take-off from the airport in Kathmandu, Nepal.  The two were on their way to meet Hillary in the village of Phaphlu where he was supervising the building of a hospital.

In his later years, Sir Edmund Hillary assumed a diplomatic career.  He was appointed New Zealand's High Commissioner to India, Bangladesh and Nepal in 1985.  He held the post for four and a half years and was based in New Delhi.  He continued to concern himself with environmental causes and humanitarian work on behalf of the people of Nepal.

On December 21, 1989, Hillary wed for the second time. He married June Mulgrew, the widow of his close friend Peter Mulgrew.  In November of 1979, Sir Edmund was to have been a commentator on an Air New Zealand tourist flight over the Antarctic. but cancelled due to another commitment.  Fellow mountain climber Peter Mulgrew replaced him.  The plane crashed on Mount Erebus, a volcano on Ross Island in McMurdo Sound, Antarctica.  All of the 257 passengers and crew, including Mulgrew, lost their lives.

This was not the first time Sir Edmund Hillary had been scheduled to fly on an aircraft that met with disaster.  On December 16, 1960, United Flight 826 and TWA Flight 266 collided over Staten Island.  Hillary had been booked on the TWA flight but had been late and missed the plane in Chicago.  All but one of the passengers perished before or during the collision.

Hillary and Tenzing Norgay always remained friends.  Norgay died in Darjeeling, West Bengal, India on May 9, 1986, of a severe bronchial condition.  He was 71 years old.  Norgay's accomplishments made him famous, but not wealthy.  He was appointed permanent director of field training of the Himalayan Mountaineering Institute in Darjeeling.  Unfortunately, he was forced to accept early retirement without an adequate pension.  In need of income, Norgay was compelled to continue to guide tourists through the Himalayas and Tibet.  This took a toll on his health and well-being.

In 1992, Sir Edmund Hillary was featured on the updated New Zealand $5 note, making him the only living New Zealander to appear on a bank note.  This went against the established convention of depicting only deceased individuals and current heads of state on currency.

Sir Edmund died of heart failure in Auckland, New Zealand on January 11, 1998.  He was 88 years old at the time of his death.  His second wife, June, survived him and still resides in New Zealand.
Peter Hillary, the 56-year-old son of the great explorer, has followed in his father's footsteps.  He is an accomplished mountaineer and adventurer.  Peter has summited  Mount Everest and has set out a new route to the South Pole.  He is a motivational speaker and has raised funds for Himalayan foundations around the world.  Along with his younger sister, Sarah, Peter manages the intellectual property of the Edmund Hillary estate.

It was former New Zealand Prime Minister Helen Clark who announced Sir Edmund Hillary's death.  In paying tribute to him, she said, "Sir Ed described himself as an average New Zealander with modest abilities.  In reality, he was a colossus.  He was an heroic figure who not only "knocked off" Everest but lived a life of determination, humility, and generosity."