Buddy Holly and his widowed bride 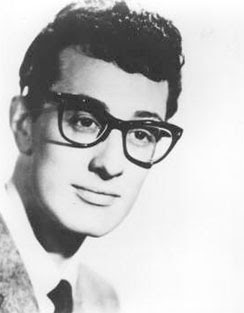 But February made me shiver
With every paper I’d deliver.
Bad news on the doorstep;
I couldn’t take one more step.

I can’t remember if I cried
When I read about his widowed bride,
But something touched me deep inside
The day the music died.

- From the song American Pie
Lyrics by Don McLean

Today is the 52nd anniversary of The Day the Music Died, a day which Don McLean immortalized in his song American Pie. On February 3, 1959, Buddy Holly, Ritchie Valens and The Big Bopper (J.P. Richardson) died in a plane crash in Iowa. Buddy Holly was 22 years with a wife and a baby on the way. Ritchie Valens was only 17 and The Big Bopper was 28. The trio had just participated in a show at the Surf Ballroom in Clear Lake Iowa as part of the Winter Dance Party Tour.

The tour opened on January 23, 1959 and was scheduled to cover twenty-four cities in the U.S. Midwest over three weeks. This created logistical problems since the travel distance between each venue was not properly taken into account by tour organizers. The musicians were subjected to overnight travel on a bus that kept breaking down. It was ill-equipped for cold winter weather and its heating system was faulty. A frustrated Buddy Holly finally decided to book a charter plane and fly to the next stop on the tour.

J.P. Richardson had come down with the flu and didn’t feel comfortable with riding on the bus. He asked Waylon Jennings, one of Holly’s band members, to relinquish his seat on the plane. Jennings agreed. When Buddy Holly discovered that Waylon wasn’t going to be on the flight, he said jokingly, “Well, I hope your ol’ bus freezes up.” Jennings replied in jest, “Well, I hope your ol’ plane crashes.”

Young Ritchie Valens had never flown on a small airplane. He asked Tommy Allsup, Holly’s remaining bandmate on the plane, for his seat. Allsup suggested that they flip a coin for a place on the flight.  Valens won the fateful coin toss.

After the Iowa show, Buddy, Ritchie and The Big Bopper boarded a single-engine aircraft bound for Moorhead, Minnesota. They never reached their destination. Weather conditions were poor as their four-passenger Beechcraft Bonanza took off into a snowstorm. The plane crashed into a corn field soon after take-off from Mason City in the early hours of February 3, 1959. The three performers and 21-year-old pilot, Roger Peterson, were killed.

Buddy Holly’s Puerto Rican-born wife, Maria Elena Santiago was in bed with morning sickness when she heard the terrible news that she had become a widow after less than six months of marriage. She had been two weeks pregnant when her husband set out on his ill-fated tour and she miscarried soon after his death.

Maria Elena first met Buddy Holly in June of 1958 when she worked as a receptionist for a New York music publisher. Less than two months later, on August 15, 1958, the couple married in Holly’s hometown of Lubbock, Texas. They honeymooned in Acapulco, Mexico.

Maria Elena always travelled with Buddy when he went on tour. She did not, however, accompany him on the Winter Dance Tour because she was in the early stages of pregnancy and did not feel well. She told the Lubbock Avalanche-Journal that in a way she blamed herself in a way for what happened in Iowa. She said that she had wanted Buddy to stay with her, but he had already booked the tour. The singer would never have boarded that plane, Maria Elena claimed, if she had gone along.

After Buddy Holly’s death, Maria Elena eventually remarried and gave birth to three children. Her second marriage ended in divorce. Now a 78-year-old grandmother, she resides in Dallas, Texas and dedicates herself to preserving Buddy’s legacy as a pioneer of rock ‘n roll.

Back in the 1980s, I watched Don McLean in concert at an open-air theatre. Those of you familiar with Toronto will remember The Forum at Ontario Place. It was a great place to watch a show on a summer evening and the concerts were free with admission to Ontario Place. My friend and I attended a Don McLean performance there and we had seats on the front benches really close to the stage. The Forum sat 3,000 people. If you failed to get a seat in the theatre, you could always sit on a blanket on the grass beyond it and still enjoy the show.


NOTE:  Yesterday, I wrote about the impending snowstorm.  It was not anywhere near as severe as predicted in the Toronto area.