Reflections on the Royal Wedding and Royal Trivia 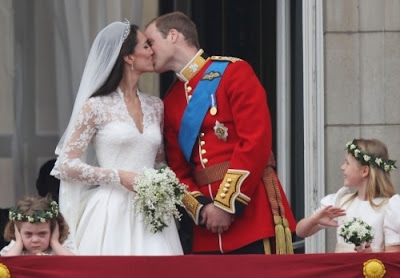 Today was a historic day for the British monarchy.  Millions of bleary-eyed people in North America and elsewhere woke up early to view the nuptials of Prince William and Kate Middleton.  They revelled in the pomp and ceremony of a royal wedding and they engaged in some serious celebrity watching.  In Britain, Prime Minister David Cameron, he of the severe cutbacks, allowed everyone a day off, a distraction from harsh economic realities.  Yes, it was definitely bread and circuses.  Nevertheless, after a Great Recession, a nightmarish tsunami/nuclear disaster in Japan and unrest in the Arab world, such a distraction was welcomed by many people.
It was rather petty not to invite Tony Blair to the wedding.  He played such a big role at Diana’s funeral.  There are not very many living former British Prime Ministers, only four.  They should have all been invited – not just Margaret Thatcher and John Major.  The fourth one is Gordon Brown.
There are, of course, no guarantees of marital bliss, but this couple appears quite comfortable with each other.  I couldn’t help but notice the little glances of understanding they gave one another.  It would seem that this union has a bar better chance of succeeding than the ill-fated one of William’s parents, Charles and Diana.  By the way, though, Charles and Di did start the tradition of the kiss on the balcony.
On the day of the royal wedding, Number 16 presents some great royal trivia.
WEDDINGS OF THE BRITISH MONARCHY - FROM WILLIAM AND KATE TO VICTORIA AND ALBERT

PRINCE WILLIAM AND KATE MIDDLETON
Catherine Elizabeth “Kate” Middleton was born on January 9, 1982.  She was 29 years old when she and Prince William took their vows at Westminster Abbey today.  William and Kate will now be known as the Duke and Duchess of Cambridge.  When William ascends the throne, Kate will become the sixth queen consort in British history named Catherine.  The list includes Catherine Valois (1401-1437), daughter of Charles VI of France, wife of Henry V of England; three of the six wives of Henry VIII - Catherine of Aragon (1485-1536), Catherine Howard (died 1542) and Catherine Parr (died 1548) - and Catherine of Braganza (1638-1705), the Portuguese Catholic wife of Charles II.
It’s a good thing William didn’t marry Kate’s younger sister, Pippa Middleton.  Queen Pippa just doesn’t sound regal, does it?  Actually, Pippa is just a nickname.  Philippa is her formal name.
CHARLES, PRINCE OF WALES, AND LADY DIANA SPENCER
﻿﻿﻿
﻿﻿﻿
William’s father, Prince Charles, married Lady Diana Spencer on July 29, 1981 at Saint Paul’s Cathedral.  Diana, born July 1, 1961, was only 19 years old when she wed the 32-year-old Charles.  The couple formally separated in December of 1992 and divorced in 1996.  Diana died in a car crash in Paris on August 31, 1997.
CHARLES, PRINCE OF WALES, AND CAMILLA PARKER BOWLES
On April 9, 2005, Prince Charles married Camllla Parker Bowles in a civil ceremony at Windsor Guildhall.  This was followed by a Church of England service of blessing at St. George’s Chapel.  Upon their marriage, Camilla was given the title of the Duchess of Cornwall.
Born July 17, 1947, Camilla is slightly older than Charles (born November 14, 1948.  At the time of their wedding, Camilla was 57 years old and Charles was 56.  When ascends the throne, Charles will be the first divorced British monarch since King Henry VIII.  He is the longest-serving heir apparent in British history, recently overtaking the record of the son of Queen Victoria.  When Victoria died on January 22, 1901 at the age of 81, her son, Prince Albert Edward, became King Edward VII at the age of 59.  Edward VII reigned until his death on May 6, 1910 at 68 years old.


Queen Elizabeth II (reigning monarch since 1952) was born on April 21, 1926. On November 20, 1947 at the age of 21, she married Prince Philip of Greece and Denmark at Westminster Abbey. At the time of her marriage, she was known as Princess Elizabeth. Just before the wedding, 26-year-old Philip was given the title of Duke of Edinburgh.

KING GEORGE VI AND LADY ELIZABETH BOWES-LYON
﻿﻿
﻿﻿
Prince Albert, Duke of York (the future George VI) married Lady Elizabeth Bowes-Lyon at Westminster Abbey on April 26, 1923.  Born August 4, 1900, Lady Elizabeth was 22 years old at the time of her wedding to Albert (known as Bertie.)   Upon their marriage, she became the Duchess of York.
The shy, stuttering Bertie unexpectedly became king when his older brother, Edward VII abdicated to marry the twice-divorced American, Wallis Simpson in 1936.  Bertie became King George VI and Elizabeth became the queen consort.  George VI reigned until his premature death on February 15, 1952.  Widowed at the age of 51, Elizabeth she took on the title of Queen Mother when her eldest daughter became Elizabeth II.  The Queen Mother died on April 2, 2002 at the ripe old age of 101.
KING GEORGE V AND QUEEN MARY
Prince George, Duke of York (son of Edward VII, grandson of Queen Victoria), found himself second in line to the throne when elder brother, Albert Victor (known to the family as Eddy), died of pneumonia on January 14, 1892.  Albert Victor had passed away only six weeks after his formal engagement to Princess Victoria Mary of Teck (known as “May”) in November of 1891.
In their shared bereavement, George became close to May.  A year after his brother’s death, he proposed to her.  With the approval of Queen Victoria, they married on July 6, 1893 at the Chapel Royal in St. James’s Palace in London.  Born May 26, 1867, the bride was 26 years of age (considered quite old for a bride of that era).  The future KIng George V was 28.
After the death of Queen Victoria in 1901, George and his wife became the Prince and Princess of Wales.  On May 6, 1910, George’s father, King Edward VII, died.  George ascended the throne as George V and Victoria Mary of Teck became the queen consort.  When the new king noticed that she signed her name “Victoria Mary,” he requested that she drop one of the names.  She chose to be called Queen Mary, preferring not to have the same name as George’s grandmother, Queen Victoria.
George V reigned until his death on January 20, 1936 and his widow officially became the Queen Mother, although she did not use that title.  She was referred to as Her Majesty, Queen Mary.  It is interesting to note that for a brief time after the death of Mary’s son, George VI in 1952, Britain had three generations of living queens.  There was the new reigning monarch, 25-year-old Elizabeth II, the Queen Mother Elizabeth and Queen Mary.  Queen Mary died on March 24, 1953 at the age of 85.
KING EDWARD VII AND QUEEN ALEXANDRA


Prince Albert Edward, son of Queen Victoria, married Princess Alexandra of Denmark at St. George’s Chapel, Windsor Castle on March 10, 1863.  Albert Edward (known as Bertie) was 21 and Princess Alexandra was 18.  After their marriage, Alexandra became the Prince and Princess of Wales.  When Bertie became king in 1901, he chose to be called Edward rather than Albert Edward as his mother had wanted.  After Edward VII’s death in 1910, Queen Alexandra lived another 15 years.  She died at Sandringham House on November 20, 1925 at the age of 80.

QUEEN VICTORIA AND PRINCE ALBERT
Queen Victoria married her first cousin, Prince Albert of Saxe-Coburg and Gotha, on February 10, 1840 in the Chapel Royal of St. James Palace.  Victoria was 20 years of age, as was Albert.  The tradition of a white wedding is commonly attributed to Queen Victoria who wore a white dress at her wedding.  She decided to wear a white gown in order to incorporate some lace she possessed.  The wedding portrait was widely published and many brides chose imitate her.
FEMALE SUCCESSION TO THE BRITISH THRONE
The British government has begun the process of reviewing the ancient rules of royal succession.  It’s about time!  The rules are antiquated and discriminatory.  British Deputy Prime Minister Nick Clegg declared that the current practice of putting male children ahead of their sisters “would strike most people as a little old-fashioned.”  I would go much further than that and used the word “archaic.”  If the first-born child of William and Kate is female, there is no reason in the world why she shouldn’t inherit the throne.  Three of the greatest British monarchs have been women – Elizabeth I, Victoria and Elizabeth II.  Their reigns have been long and successful.
The 1931 Statute of Westminster stipulates that no change can be made without the agreement of all the 16 Commonwealth realms, including Canada, Australia, New Zealand and Jamaica.  Canada’s Prime Minister, Stephen Harper, is cool to changing the rules.  Harper told the Vancouver Sun that he doesn’t think Canadians “want to open a debate on the monarchy or constitutional matters at this time.  He said, “That’s our position and I just don’t see that as a priority for Canadians right now, at all.”  Harper also stressed that the next to people in line to the throne, Prince Charles and Prince William were both men.
Keith Vaz, the British Member of Parliament for Leicester East, has introduced a draft law to Parliament which would allow female offspring equal rights to the Crown.  Vaz is very critical of Stephen Harper’s position.  He said, “I am disappointed in Prime Minister Stephen Harper’s response to the debate over succession.  The question of whether women should have equal rights to become heir to the throne is a very important one, based on the fundamental principle of gender equality.  Canadians must be given a chance to discuss it.”
Vaz’s Succession Bill will be read for a second time in the British House of Commons on May 13.  Other constitutional monarchies have gotten rid of preference for males in their succession laws.  These include Sweden in 1980, the Netherlands in 1983, Norway in 1990 and Belgium in 1991.  Britain, Spain, Japan, Monaco and Luxembourg continue to maintain male preference in their rules of succession, known as “primogeniture.”
LANGUAGE CORNER
According to the Merriam-Webster Dictionary, primogeniture is “an exclusive right of inheritance belonging to the eldest son.  It is derived from the Latin “primus” (first) and “genitura” (birth).
SPORTS
FIGURE SKATING
Congratulations to Canada’s Patrick Chan for his magnificent performance at the World Figure Skating Championships in Moscow.  The skater from Toronto captured the gold medal and he was really dominant, setting a record in his short program with an amazing score of 93.02.  With the hockey playoffs in full swing, Chan is not getting the attention he deserves.  If he were a hockey player or a baseball player, he would be the toast of the town.
- Joanne
Posted by Joanne at 5:18 PM No comments: