Trump's Last Stand: Reflections on the Storming of the Capitol 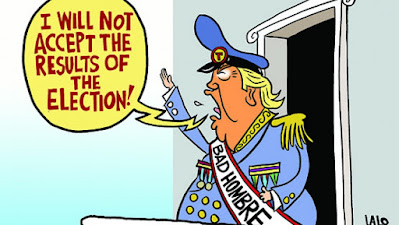 It's heard to swallow what happened in Washington, D.C. on January 6, 2021.  On that fateful day, the U.S. Capitol was invaded for the first time since the War of 1812.  This time, however, the invasion did not come from an outside enemy.  Oh no.  This time, it was domestic.  It came from within and it came at the bidding of a man who swore to uphold, defend and protect the Constitution of the United States.

Donald J. Trump,, the 45th President of the Republic, actively encouraged violence and sedition.  He incited his extreme, right-wing, neo-Nazi followers to march on the Capitol building in Washington, D.C.  The president aided and abetted this insurrection and he should be held accountable for this heinous crime and for the other criminal acts he has committed during his presidency..

Millions of Americans and people around the world witnessed the horrifying events in Washington on their television screens.  Right before their eyes, live and in colour, they saw the desecration of the most sacred temple of American democracy.  They watched in stunned disbelief as the Capitol building was vandalized and violated by an unruly mob.  For several hours, parts of the building were occupied and ransacked, including Speaker Nancy Pelosi's office.  It was all very surreal.  Yet, it really happened, thanks to Donald Trump, his spineless sycophants in the Republican Party and his cult-like adherents.

Unfortunately, far too few Americans hold the president responsible for what happened in Washington.  According to a new YouGov poll, a majority of Republican voters named President-elect Joe Biden as the culprit rather than Donald Trump.  1,450 eligible voters were surveyed and 52 percent of Republicans blamed Biden rather than Trump.  In comparison, only 28 percent of Republicans pointed the finger at the president for inciting the violence, while 26 percent blamed congressional Republicans for attempting to block the final tally of Biden's Electoral College win.

This should not be a partisan issue.  It is a matter of upholding democracy and the rule of law.  Yes, Donald Trump received over 74 million votes, but Joe Biden received over 81 million votes.  The Electoral College confirmed Joe Biden's victory in the 2020 election with 306 to 232 the final count. .  Biden was the clear winner and accusations of electoral fraud were proven baseless and were rejected by numerous courts.

Sadly, fascism has come to America in the form of right-wing extremists who believe they are patriots and who wrap themselves in the American flag.  The distressing fact is that so many Republican voters still support Donald Trump's delusional conspiracy theories.  They contend that the election was rigged and that it was stolen from Trump.  They believe this without any credible proof.  In fact, the evidence shows that the election was free and fair.

Are these Republican voters so brainwashed, their minds so addled that they cannot see the truth - or is it that they prefer to ignore the facts?  On January 6th, the day that lawmakers were to meet to make Joe Biden's Electoral College victory official. Donald Trump held a rally and urged his supporters  to march on Capitol Hill.  Trump told the crowd: "You'll never take back your country with weakness.  You have to show strength and you have to be strong."   It was Donald Trump, not Joe Biden, who egged on his followers and caused them to wreak havoc.  He gave them his blessing and the green light to act as they did.

Since media have posed some hard questions about the storming of Capitol.  Reporters and broadcasters have demanded to know why there was such poor security around Capitol Hill.  Why were the insurgents allowed to stand on the steps of the Capitol, break windows and vandalize offices.?  Why were police so ill-prepared for what happened?  For weeks Donald Trump exhorted his followers to to go to Washington on January 6th.  It was no secret.  It was no surprise when his ardent supporters obeyed him.  What was surprising and terribly shocking was that law enforcers were so ill-prepared for what happened.  Why were Trumps band of thugs, anti-Semites and white supremacists able to breach security so easily?  Would the situation have been different if a majority of the Capitol invaders had been black?  These questions cannot be ignored.  They cannot be brushed away.

Make no mistake.  What has taken root in the United States is not conservatism, but Trumpism, and it's this Trumpism that must be soundly defeated if the U.S. is to remain a viable democracy.  For the safety of the American people and for the sake of the free world, Donald Trump must be removed from the White House as soon as possible. This president is not fit for office.  He is clearly unstable, unhinged and very dangerous.  Donald Trump is a cornered man.  He is desperate and desperate people take desperate measures.

This president  must be held accountable for his actions and for his high crimes and misdemeanours.  He should do the right thing and resign.  Failing that, the 25th Amendment should be invoked.  If that does not happen, Donald Trump must be impeached for a second time, whether he is convicted or not. This must be done so that no president can be allowed to undermine democracy the way he has.  Donald Trump is not above the law and he must never be allowed to hold office in the United States again.  Every day he remains in the White House, America is in peril.

I am so glad that Twitter permanently banned Donald Trump.  He does not deserve any forum to spew his hatred, his venom and his lies.  He should not be permitted to incite violence.  Enough is enough is enough  Donald Trump has got to go before he causes further damage to the democratic fabric of the Republic.  Five people, including a police officer, died in Wednesday's attempted coup.  Trump's term in office ends on January 20th.  Does the U.S. need more violence and more deaths during that time:?

Posted by Joanne at 3:59 AM No comments: