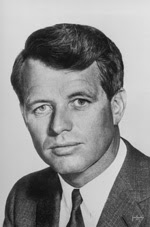 1968 was quite a shocking year in the United States.  Two major assassinations rocked the nation to its very core.  On April 4, 1968, civil rights leader Martin Luther King Jr. was killed while standing on a motel balcony in Memphis, Tennessee.  Senator Robert F. Kennedy, a strong supporter of Dr. King and the civil rights movement, tried to heal a grief-stricken country. He talked of his own grief when his older brother, President John F. Kennedy, was assassinated while riding in a motorcade through the streets of Dallas.  About two months later, Bobby himself would be killed by an assassin's bullet during his campaign for his Democratic nomination for president.

I have watched Bobby's victory speech in California many times.  I watched it again last Sunday night and it almost brought tears to my eyes.  He ended his speech with the words, "And it's on to Chicago and let's win there!"  Tragically, Bobby never made it to the Democratic Party's convention in the Windy City.  He was shot dead while walking through the kitchen of the Ambassador Hotel in Los Angeles.  If that hadn't have happened, RFK would most likely have been elected president.  After his victory in the California primary, he had the momentum to defeat his Democratic rival, Eugene McCarthy for the Democratic nomination.  He probably would have gone on to defeat the Republican nominee for president, Richard M. Nixon.

Sadly, it didn't happen that way.  Nixon won the 1968 presidential election and was re-elected in 1972.  The Watergate Scandal ensued and Nixon resign from office in 1974.  The United States was deprived of the opportunity of having Bobby in the White House.  What a loss.  He would have been a great president.  No, Bobby wasn't perfect and he wasn't a saint.  He had a heart, though.  He was compassionate, not narcissistic.  He was concerned about poverty, not about tax breaks for billionaires.

50 years have passed since RFK was murdered.  If he were alive today, I am certain that he would oppose the polices of the current President of the United States vigorously.  In an interview just before his death, Bobby was asked by David Frost about how his obituary should read.  He replied, "Something about the fact that I made a contribution to either my country or those who are less well off.  I think back to the way Camus wrote about the fact that perhaps this world is a world in which children suffer, but we can lessen the number of suffering children, and if you do not do this, then who will do this?  I'd like to feel that I'd done something to lessen that suffering."  Can you imagine Donald Trump saying anything like that?  I don't think so.

You are missed, Bobby.  The United States and the world could use your kind of leadership.