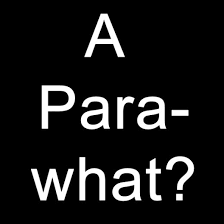 One of my interests is having fun with language. I really enjoy word games, figures of speech  and wordplays.  Among my favourites are paraprosdokians.  That's right - paraprosdokians.  It's quite a mouthful, isn't it.  It sounds like the name of a creature in J.R.R. Tolkien's Lord of the Rings.

"The term "paraprosdokian" is derived from Greek words meaning "against" and "expectation."  A paraprosdokian is actually a literary device in which the last part of the sentence or phrase is surprising, shocking or unexpected.  It can be found in prose and poetry and has been described as a "linguistic U-turn."  In baseball parlance, a paraprosodokian is a phrase that "throws you a curve."  The latter part of the phrase causes you to rethink the first part.

Former British prime minister Winston Churchill was an absolute master of paraprodokians.  An example of a Chuchillian paraprosdokian is "There but for the grace of God - goes God."  Sir Winiston also once famously remarked: "You can always count on the Americans to do the right thing - after they have tried everything else."  He reportedly described his political rival, Clement Attllee, as "a modest man, who has much to be modest about."  Concerning democracy, Churchill made this well-known declaration: "It has been said that democracy is the worst form of government except all those other forms that have been tried."  He had some advice too:  "If you are going through hell, keep going."

Paraprosodokians are often employed by comedians and satirists for humorous or dramatic purposes, Stand-up comics frequently use "one-liners" because the set-up and the punch line are in a single line. Henny Youngman's "Take my wife . . .please!" is perhaps the most famous one-liner.

Not surprisingly, comedian Groucho Marx was fond of paraprosdokians.  He uttered the following zinger: "I've had a perfectly wonderful evening, but this wasn't it."  Groucho also uttered this comment: "Time flies like a an arrow, fruit flies like a banana." Here's another one from him:  "I once shot a diplomat in my pyjamas.  How he got in there I'll never know.".  And another:  "Outside of a dog, a book is man's best friend.  Inside of a dog, it's too dark to read."" Finally, I just can't resist one more from Groucho:  "She got her good looks from her father.  He's a plastic surgeon."

Homer Simpson, the animated star of The Simpsons, has gotten into the act too.  He stated: "If I
could just say a few words . . . I'd be a better public speaker."

Here's one from the much-married Zsa Zsa Gabor:  "He taught me housekeeping; when I divorce I keep the house.”

Albert Einstein has been credited with"the following observation: 'The difference between stupidity and genius is that genius has its limits."  However, there is no substantive evidence that the brilliant scientist ever made such a statement.

Mahatma Gandhi, the spiritual father of India, proved he could be quite adept at using paraprosdokians. Here is what he once quipped: "What do I think of Western civilization?  I think it would be a very good idea."

This paraprosdokian is attributed to playwright Oscar Wilde: "Some cause happiness wherever they go.  Others whenever they go." 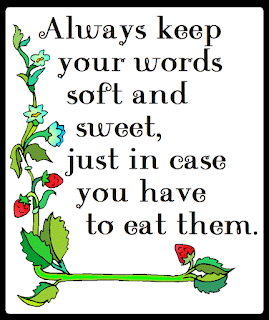 Number 16 presents 35 paraprosdokians for your enjoyment and edification:

1.  If you can't sleep, count sheep.  Don't count endangered animals.  You will run out.
2. The last thing I want to do is hurt you . . . but it's still on my list.
3.  Since light travels faster than sound, some people appear bright until you hear then speak.
4.  If I agreed with you, we'd both be wrong.
5.  We never really grow up - we only learn how to act in public.
6.  War does not determine who is right, only who is left.
7.  Knowledge is knowing a tomato is a fruit. Wisdom is not putting it in a fruit salad.
8.  To steal ideas from one person is plagiarism. To steal from many is research.
9  I didn't say it was your fault, I said I was blaming you.
10, In filling out an application, where it says, "In case of emergency, notify , , , I answered "a doctor."
11. Women will never be equal to men until they can walk down the street with a bald head and a beer gut, and still think they are sexy,
12.  You do not need a parachute to skydive. You only need a parachute to skydive twice.
13,  I used to be indecisive, but now I'm not so sure.
14.  To be sure of hitting the target, shoot first and call whatever you hit the target.
15.  Going to church doesn't make you a Christian, any more than standing in a garage makes you a car.
16.  You're never too old to learn something stupid.
17.  I'm supposed to respect my elders, but it's getting harder and harder for me to find one now.
18,  They begin the evening news with ‘Good Evening,’ then proceed to tell you why it isn’t.
19.  Buses stop in bus stations. Trains stop in train stations. On my desk is a work station.
20,  I thought I wanted a career. Turns out I just wanted paycheques.
21.  Behind every successful man is his woman. Behind the fall of a successful man is usually another woman.
22,  A clear conscience is the sign of a fuzzy memory.
23,  Money can’t buy happiness, but it sure makes misery easier to live with.
24. Nostalgia isn’t what it used to be.
25. Change is inevitable, except from a vending machine.
26. Silence is golden, duct tape is silver.
27. Where there's a will, there are relatives.
28, Of course I agree you're a wit . . . even if your're only half right.
29. Sometimes I pretend to be normal.  But it gets boring . . . so I go back to being me.
30, She often stood outside in order to be outstanding.
31,  Do not argue with an idiot.  He will drag you down to his level and beat you with experience.
32.  The food here is terrible . . . and such small portions.
33.  You don't seem to be yourself lately.  So tell me, what brought about such an improvement?
34.  Your argument about the Middle East is sound . . . nothing but "sound."
35.  The early bird gets the worm but the second mouse gets the cheese.