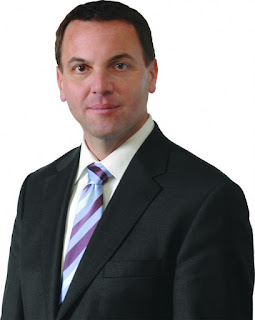 It seems as if Progressive Conservative leader Tim Hudak is trying to out-Harris former Ontario premier Mike Harris.  Hudak is veering further to the right than his Harris, his former boss and ideological soul-mate.  These days, the 45-year-old Hudak spends most of his time badmouthing evil unions and radical environmentalists. He blames them for stalling Ontario's economic recovery.

Hudak has been harsh in his attacks on unions, particularly public sector unions.  As the Toronto Star's Martin Regg Cohn put it in his July 12, 2012 column, "He (Hudak) relegates unions to the dustbin of history, comparing them to rotary phones and typewriters that have been overtaken by smartphones and touchpads."
The PC leader has described pensions for teachers, civil servants and other public sector employees as "gold-plated."

In criticizing public sector pensions, Hudak is driving a wedge between private and public workers instead of trying to protect pension benefits for all.  It is a tactic that causes private sector employees to vote against their own interests due to envy and resentment of government employees.  Do you hear many conservative politicians railing against their own "gold-plated" pensions?  Hudak should keep in mind that he and his fellow government employees fill government coffers by spending money and paying taxes. “The broader issue," as Ontario Premier Kathleen Wynne has stated, "is to make sure that all of the people of Ontario have the prospect of a reasonable retirement."

The environment?  Last February, Tim Hudak delivered a speech to the Rural Ontario Municipalities' Association  in which he denounced measures that protect endangered species, arguing that they have a detrimental effect on agricultural and business.  He vowed that he would remove "the more than 300,000 regulations, outdated rules, and runaround you have to cope with just to get something done."

Tim Hudak has also vowed to do away with the green energy deals in Ontario.  In May of 2011, he described the province's lucrative $7-billion agreement with South Korea's Samsung Group as "odious" and promised to abolish it should his party form a government.  So much for clean, renewable energy!

Tim Hudak is not a conservative in the mould of William Davis or John Tory. He is a dyed-in-the-wool Thatcher conservative and his policies are right from the Tea Party textbook.  Hudak and Mike Harris are on a mission to remove the term "Progressive" from their party's name, figuratively speaking.

By the way way, I do not condone fiscal irresponsibility or the waste of hard-earned taxpayers' money.  The eHealth scandal, the Ornge scandal and power plant debacle were absolutely disgraceful and a huge blight on the reputation of former Ontario Premier Dalton McGuinty.  What I am opposed to is the whole neo-conservative philosophy that government is the enemy.

Tim Hudak has been very clear about which direction he wants to take the province of Ontario if he ever become its premier.  He has no hidden agenda.  He has told Ontarians exactly what he plans to do in no uncertain terms.  Have we Ontarians been paying attention?  Is this the vision we have for our beautiful province.  I think not.  I hope not.