The trouble with "Santa Claus is Coming to Town" 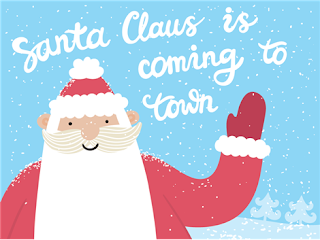 Let me be honest.  I don't like the words to the song "Santa Claus is Coming to Town."  I have absolutely no problem with the delightful melody.  The music is lively and fun to sing.  However, it's the lyrics that I find troublesome.  First, a little background to the song.  It was composed by two Americans, Broadway songwriter John Frederick Coots (1897-1985) and Haven Gillespie (1888-1975), a Tin Pan Alley composer and lyricist.  Gillespie, a native of Kentucky, wrote the lyrics during the depths of The Great Depression.  Although it garnered more royalties for him than anything else he had ever written, he avoided listening to it.  The popularity of "Santa Claus is Coming to Town" was bittersweet for him because it brought back memories of his deceased brother, who had died around the time the tune was published.


The familiar words to the song read as follows:

He sees you when you're sleeping
He knows's when you're awake
He knows when you've been bad or good
So be good for goodness sake!


Here's why I object to the lyrics.  The words present Santa as some kind of an Orwellian Big Brother, a stalker watching a child's every move - "He  sees you when you're are sleeping.  He knows when you're awake.  He knows if you've been good or bad . . . "  Furthermore, the words teach children that they should behave because they are being watched and that if they are naughty, they will not receive any presents.  Their motive for good behaviour is to be rewarded by material gifts from Santa.  It appears that there is no motive for good conduct when there are no presents.

Yes, I know the song is a Christmas favourite and that it's extremely popular.  It has been recorded by a myriad of artists including Bing Crosby and The Andrews Sisters, The Crystals, Mariah Carey, Bruce Springsteen, Frank Sinatra, the Jackson 5, The Carpenters and Michael Buble.


"Santa Claus is Coming to Town" was first sung in November of 1934, on Eddie Cantor's radio show.  It became an instant hit.  According to author Ace Collins in his book Stories Behind the Greatest Hits of Christmas, "Within twenty-four hours of its radio debut, "Santa Claus is Coming to Town" had sold more than thirty thousand records and sold more than a hundred copies of sheet music."

The earliest known recording of Santa Claus is Coming to Town was that of banjoist Harry Reser and his band.  The recording was made on on October 24, 1934.  It was also recorded by Tommy Dorsey & His Orchestra for Victor Records.

In his book. Ace Collins states that "when the song was released, few noted the subtle message created by "Santa Claus is Coming to Town."  They viewed it as "little more than a morality play set to music.,"  "Some even latched onto it as a new take on The Golden Rule," writes Collins, "and as a wonderful way to keep their kids in line."  After all, George Orwell's 1984, was not published until June of 1949.

I may be accused of nitpicking or of being too politically correct.  "What's wrong with a holiday ditty that makes people smile?" I will probably be asked?  It's harmless, I will be told by some.  Well, I'm no killjoy.  I love the spirit of Christmas, but I also believe that words matter.  The lyrics to Santa Claus is Coming to Town make an impression on children.  I am certainly not suggesting that the song should be censored or banned.  I just think that it's important for parents to sit down and discuss it with their children at Christmastime.