The Dionne Quintuplets: The Triumph and Tragedy of Canada's Famous Babies 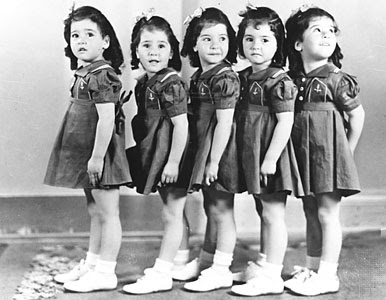 At the height of the Great Depression, five identical baby girls were born on May 28, 1934 near the village of Corbeil, just outside of Callander, Ontario.  They were born prematurely in a farmhouse  to Oliva and Elzire Dionne.  Their birth, 77 years ago today, delighted Depression-weary Canadians who were eager for some happy news.  It also attracted world-wide attention because there had been only two previous cases on record.  The Dionne babies were the first known quintuplets in the world to to survive past infancy.  The girls were, in order of birth, Yvonne, Annette, Cecile. Emilie and Marie.

Although the Dionne story captivated Canadians, many controversies arose regarding the upbringing and welfare of the children.  Just days after their birth, when it was uncertain whether they would live, Oliva Dionne, their father, signed a contract to exhibit them at the Chicago Century of Progess Exposition.  He did this without consulting with his wife.

Fearing that the babies would be privately exploited, the Ontario government intervened removed them from their dirt-poor Franco-Ontarian parents.  After just four months with their family, the girls were made wards of the province under the Dionne Quintuplets' Guardianship Act of 1935.  They were placed in a specially built hospital under the care of Dr. Allan Roy Dafoe, the obstetrician who delivered them.  Oliva Dionne, fought a nine-year battle to regain custody of his daughters.

Ironically, it was the government and those around them who brazenly exploited the Dionne Quintuplets for profit.  Between 1934 and 1943, the girls were put on display at a theme park called "Quintland," located between North Bay and Callander, Ontario.  Three million people visited Quintland to watch the girls play befind a one-way screen.  Oliva Dionne ran a souvenir shop and concession store opposite the nursery. 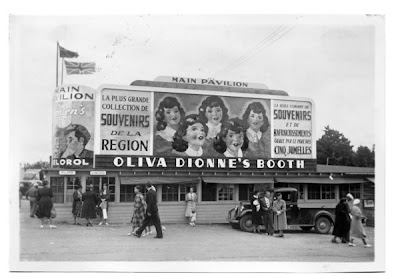 The quintuplets became Canada's most popular tourist attraction of the 1930s, surpassing the revenue produced by visitors to Niagara Falls.  Many Hollywood stars, including Clark Gable and James Stewart and Bette Davis, visited the Dionnes at Quintland.  Famed pilot Amelia Earhart went there just just weeks before her death in 1937.

Through no choice of their own, the Dionne Quintuplets found themselves at the centre of a circus.  Their lives were turned into a freak show and they were, according to the the Canadian Encyclopedia, a $500 million asset for the province of Ontario.  The sisters made numerous endorsements for such products as Quaker Oats, Karo Corn Soup, Palmolive Soup and Colgate Dental Cream.  Their commercial endorsements built them a trust fund of nearly $1 million and Hollywood fictionalized the Dionne story in three films. 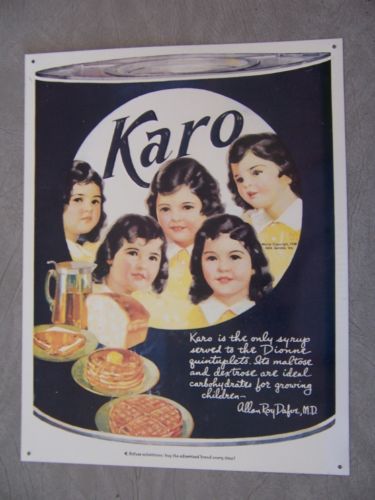 Dr. Dafoe, who grew wealthy on the Dionne's product endorsements, died on June 2, 1943 at the age of 60 from pneumonia and complications from cancer.  Shortly after his death, in November of 1943, the Dionne parents won back custody of the five girls and the family moved into a big home within walking distance from Quintland.  The reunion proved to be unsuccessful in the long run.  According to accounts by the surviving sisters, the girls were not treated as individuals, but as a unit.  They were strictly disciplined and punished.

The quintuplets left the family home when they turned 18 and eventually moved to Montreal.  Emilie, an epileptic, entered a convent.  Annette, Cecile and Marie all had failed marriages and Yvonne remained single.  Emilie died on August 6, 1954 of accidental suffocation during an epileptic seizure at her convent.  She was only 20 years old.  Marie died on February 27, 1970 in her Montreal apartment of an apparent blood clot of the brain.  She was 35 years old at the time of her death.  Yvonne died on June 23, 2001 of cancer at age 67.

Oliva Dionne passed away in 1979.  His wife Elzire died in 1986.  In 1995, the three surviving quints alleged that Oliva had sexually abused his daughters during their teenage years when they were no longer under the influence of the domineering Dr. Dafoe.  The explosive allegations appeared in a book written by Jean Yves Soucy with Annette, Cecile and Yvonne.  Originally published in French, the English language version came out in 1996.  It is titled Family Secrets.  When interviewed by Radio-Canada in Montreal, the sisters were asked why they remained silent about the abuse for so long.  Annette replied that "We've come to a point where we had to liberate ourselves from the past." Cecile declared, "It's a long time, but that's normal for something so deep."

In 1998, Yvonne, Annette and Cecile, living together in the Montreal suburb of Saint Bruno-de-Montarville, reached a financial settlement with the government of Ontario over the province's exploitation of them during their childhood. They received $4 million in compensation for the nine years they were put on display at Quintland.


Some interesting facts about the Dionne quintuplets:

* Four of the Dionne quints were right-handed.  Emilie was left-handed.

* Dr. Dafoe is buried at Park Lawn Cemetery in Toronto.

* It was not until September of 1987 that another set of quintuplets (two boys and and three girls) was born in Canada.


EDITOR'S UPDATE (November 14, 2016):  On October 23, 2016, a story by Marian Scott appeared in the Montreal Gazette about the two remaining Dionne quintuplets, Cecile and Annette. The sisters are 82 years old now.  After their 1998 $4 million settlement with the Ontario government, Cecile is still struggling.  She resides in "a shabby seniors' home in Montreal North, as wards of the state." Accordig to the Gazette arrticle, she lives on a governmet pension of $1,443 a moth.  Her sister Annette is faring considerably better financially.  She lives independently in "a pleasant condo in South Shore-St Bruno.  Annette, however, is unable to look after Cecile, who cannot live independely because of serious health problems, Annette does pay for Cecile's extras, such as haircuts and a refrigerator for her room.

Carlo Tarini, a public relations consultant involved in negotiating the Dionnes' settlement, is quoted in the Gazette story as saying, "How incredibly tragic this is."  The three surviving sisters at the time were reported to have received $1 million each, with the fourth $1 million alotted to Marie Dionne, who did in 1970..  However, Tarini stated that only $75,000 remained after lawyers and pulic relations consultants were paid.

After the 1998 settlement, Cecile's son, Bertrand Langlois purcheased a duplex in the Hochelaga-Maison-Maisonneurve area and he and his mother lived there.  Langlois sold the property for $570,000 in 2006 and placed his mother in an expensive senior's residence on Sherbrooke St. E. Around four years ago, the payments from the bank for the monthly fees ceased.  Cecile told the Montreal Gazette that she has tried to contact her son, but has been unable to do so.  The Gazette was unable to locate Langlois either.