The truth about the convoy protesters 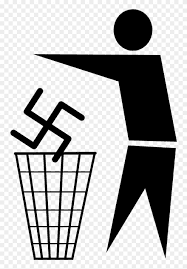 “Freedom of expression, assembly, and association are cornerstones of democracy; but Nazi symbolism, racist imagery, and desecration of war memorials are not. It is an insult to memory and truth.”

Language matters, so I urge the media to stop referring to the trucker convoys as a "freedom convoys."  There protests have nothing to do with freedom.  That's why I  was disappointed and disgusted that here in Canada, the National Post and Global News have been using that term in headlines.  This is an affront to real freedom.,  It is an affront to those who actually championed the cause of freedom and made sacrifices for the sake of democracy.  To describe these protests as "freedom convoys" is to use Orwellian language.  It is truly reprehensible.

Let's be clear.  The purpose of the convoy protests is to cause economic woes, anxiety and chaos in order to accomplish an extreme right wing, anti-government political agenda.  Many of the protesters are white supremacists and Neo-Nazis and they have displayed swastikas.  Kyle Matthews, executive director of the Montreal Institute for Genocide and Human Rights Studies at Concordia University said, "It is shocking in 2022 to see people openly carrying these symbols and thinking it's okay.  Clearly there are a number of people who don't understand what the Holocaust is about.  They don't understand that their situation is nowhere near comparable."

Frankly, the behaviour of many of the demonstrators has been abominable.  In Ottawa, they have placed anti-vaxxer signs on the Terry Fox statue and urinated on the National War Memorial.  That is definitely not my idea of championing freedom.  I hope it's not yours.  Therefore. I feel it is incumbent upon me to condemn this behaviour in the strongest possible terms.  It is not acceptable in Canada or anywhere else.

The convoy protesters were likely inspired by the insurrection at the U.S. Capitol in Washington, D.C. on January 6, 2021.  That shameful episode in American history was encouraged by a former American president who refused to accept the legitimate results of the 2020 U.S. election.  On January 6th, his supporters tried to subvert democracy.  The protesters were not, as the Republican National Committee stated, engaged in "legitimate political discourse" (more Orwellian language).  One of them carried a huge Confederate flag.  Another wore a shirt with an anti-Semitic message about the Holocaust.  They threatened the lives of Vice President Mike Pence and House Speaker Nancy Pelosi.  Sadly, these are the same people who are supporting the trucker convoys.

It is distressing and disheartening to hear that convoy protests are rising up in various cities around the world.  It signals the insidious spread of Trumpism.  Decent people must speak up now.  Decent people must remember our history or, as the saying goes, we are doomed to repeat it..  The rise of fascism in the 1920s and 1930s should be taught over and over again to each generation.  Education is the best response to ignorance.

Posted by Joanne at 1:13 PM No comments: