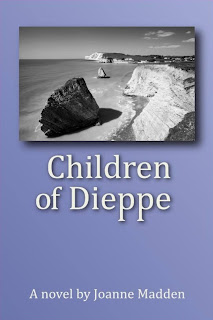 I am pleased to announce that my first novel, Children of Dieppe, is now available as an ebook on Smashwords.(smashwords.com).

Children of Dieppe is the story of Denise Nair, whose father, Jim Nair, died during the tragic raid on the French port of Dieppe in 1942.  The repercussions of that raid are life-changing for Denise's family, friends and acquaintances, They are forced to come to terms with Jim's past on the Isle of Wight, where he trained for the Dieppe invasion.  Denise is determined to uncover what happened there.  Along the way she must deal with her best friend, the Rosemary Tillis' infatuation with hockey goalie Mark Steeles, to whom she is also attracted.  Denise's friendship with the troubled Rosemary is chronicled in the novel, as well as her encounters with the mysterious Gordon Sloane, a childhood friend of her father.  Children of Dieppe is a sweeping drama that spans a time period from World War II until the 21st century.

I completed Children of Dieppe while at home during the pandemic of 2020.  It was my way of being creative and productive during these difficult days.  My hope that those who choose to read it will really enjoy it.  I believe it is a thoughtful but easy read.  If you have any questions about the novel for me, I would be pleased to answer them.  Just email me at jmadden16@yahoo.ca

For those who are interested in checking out my novel, here is the link.

-Smashwords – Children of Dieppe – a book by Joanne Madden

Thank you Number 16 readers.  Stay safe and have a Merry Christmas / Happy Holiday.

Posted by Joanne at 2:37 AM No comments: