The Disappearance of Amelia Earhart

Of course I realized there was a measure of danger. Obviously I faced the possibility of not returning when I first considered going. Once faced and settled there really wasn't any good reason to refer to it again 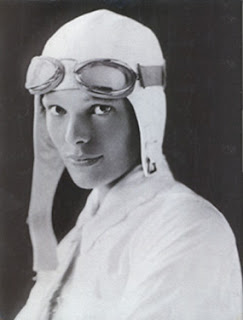 Amelia Earhart was one of the most admired and courageous women of her era. Born on July 24, 1897 in Atchison, Kansas, the famed aviatrix was the first woman to fly solo across the Atlantic Ocean and she set many aviation records. Outspoken and fiercely independent, Earhart brimmed with the spirit of adventure. In her 1927 poem, Courage, she wrote that courage is “the price that Life exacts for granting peace.”

On July 2, 1937, Amelia and her navigator, Fred Noonan, set out to fly across the Pacific Ocean in an attempt to circumnavigate the globe at the equator with their intended destination being Howland Island, a tiny sliver of land 4,113 km. (2,556 miles) away. At midnight (GMT), they took off from Laos in Amelia’s Lockheed Electra 10E and never returned.

What happened to them has been the subject of much fascination and speculation around the world. In her final radio transmission, Amelia Earhart reported that her airplane was running low on fuel. There was a massive search for the legendary aviatrix and her navigator. The search was unsuccessful and many assumed that the twin-engine aircraft had crashed into the ocean and sunk.

Although the duo’s fate is still not known for certain, clues have surfaced recently to support the theory that Earhart and Noonan made an emergency landing on a remote South Pacific island and eventually perished there. Evidence has come to light suggesting that Earhart and Noonan died as castaways on the uninhabited tropical island of Nikumaroro, about 483 km. (300 miles) southeast of their target destination, Howland Island.

Back in 1940, a partial skeleton was found on the island that matched Amelia’s description, that of a tall Causcasion woman. Unfortunately, the partial skeleton was lost. Seventy years later, however, in the spring of 2010, aviation enthusiasts discovered 3 bone fragments on Nikumaroro. Last June, researchers announced that they had also discovered some items on the island that may have been used by Earhart. The items included a knife, some old makeup and broken glass bottles and shells. In an e-mail interview from Nikumaroro, Ric Gillespie, executive director of The International Group for Historic Aircraft Recovery (TIGHAR) informed Discovery News that these objects “have the potential to yield DNA, specifically what is known as ‘touch DNA’.”

The bone fragments were discovered near a hollowed-out turtle shell that may have been used collect rain water. No other turtle parts were located in the immediate area. In December 18, 2010 Associated Press story by Sean Murphy, Gillespie is quoted as saying, “You only have to say you have a bone that may be human and may be linked to Earhart and people get excited. But it’s true that, if they can get DNA, and if they can match it to Amelia Earhart’s DNA, that’s pretty good.”

It could be months before scientists know for certain. It appears, though, that the intriguing mystery of Amelia Earhar’s fate is close to being solved. People will always wonder about her last days and what they were like. Amelia was 39 years old at the time of her disappearance.

So it's Pittsburgh and Green Bay in the Super Bowl.  I'm not a big NFL fan.  I prefer Canadian football and there isn't enough time for me to follow both.   I do, however, have a soft spot for the Packers.  Green Bay, Wisconsin is not a huge metropolis like New York or Chicago.  I hope the "cheeseheads" win.