Who should be captain of the Toronto Maple Leafs?

The Toronto Maple Leafs have been without a captain for almost three years now - since February 9, 2016, when Dion Phaneuf was traded to the Ottawa Senators in a blockbuster 9-player deal.   Phaneuf was named the 18th captain of the Maple Leafs on June 14, 2010, at a press conference held by former Leaf general manager Brian Burke  Phaneuf succeed Mats Sundin, who left the team after the 2007-08 season.

Since the departure of Phaneuf, who now toils for the Los Angeles Kings, the Leafs have been rebuilt into a real contender for the Stanley Cup.  The time is approaching for the storied franchise to choose a new captain., a leader whom fans can picture hoisting Lord Stanley's Jug.

So, who should be the captain of the Blue and White.  My vote goes to John Tavares, although he is not my favourite Leaf player.  Mitch Marner, who wears No. 16, is my favourite because he is skilled and fun to watch.  However, Tavares has displayed the leadership qualities necessary to be a captain.  He also has the experience required for the job, having been captain of the New York Islanders for five seasons.  Here's how his teammate, defenceman Morgan Rielly, described Tavares. as quoted by Rosie DiManno in the Toronto Star.

He not quiet, he talks.  When it comes to his leadership, he leads by example on the ice and just the way he leads his life.  He appears to be very comfortable in a new environment an that's a good thing.

There are other players who deserve consideration for the captaincy - Auston Matthews, Patrick Marleau and Morgan Rielly come to mind.  They don't stand out the Tavares does.  Matthews is a franchise player, but he is still only 21 years old.  His chance will come.  John Tavares is ready now. 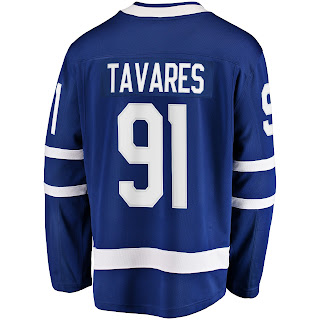 In his short time with the Leafs, Tavares has shown that he knows how to handle all the media glare  that goes with being a Maple Leaf.  He seems comfortable in the spotlight.  He has also stepped up during Auston's Matthews absence due to injury.

I understand why the Leafs didn't want to appoint Tavares captain right away.  It is understandable why they would want to wait until he played a number of games with the Leafs.   Tavares is already one of three alternate captains, along with Patrick Marleau and Morgan Rielly.  I hope that in 2019, his "A" will be replaced by a "C."