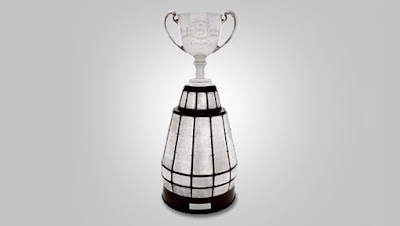 Congratulations to the Ottawa Redblacks for winning the 104th Grey Cup on Sunday.  Led by 41-year-old quarterback Henry Burris, the Redbacks won a thrilling football game by a score of 39 to 33 in overtime. They brought the championship back to Canada's capital city after a drought of 40 years and they engineered one of the biggest upsets in Grey Cup history by defeating the heavily-favoured. Calgary Stampeders,

The game was exciting.  Weather conditions were ideal and it was great to see Canadian football legend Russ Jackson in attendance.  So, why was I left with a bit of a sour taste in my mouth?  I was disappointed, but not surprised, by the attitude of my hometown, Toronto, which hosted the game. That attitude can only be summed up in one word - apathy.  For days prior to the game, one could troll the streets of Toronto and find little evidence that an important sporting event was about to take place in this city.  To put it mildly, there was very little enthusiasm among the locals.  There was no festive spirit.

For quite a few years now, Canada's largest city has displayed the same attitude toward its storied CFL franchise, he Toronto Argonauts.  Sure, the Argos didn't have a very good team this year (They finished last in the East Division and were tied for the worst record in the CFL).  Sure, there's a lot more competitions from the city's other professional sports clubs.  The Blue Jays, the Raptors and Toronto FC all have good teams.  The Maple Leafs finished 30th and last in the NHL in 2015.  However, Leaf Nation didn't care that their team wound up in the basement.  They are pleased as punch that the Blue and White seem to be headed in the right direction.  All that matters is that the Leafs are building a skilled, dynamic young team. Never mind that the team hasn't  won the Stanley Cup for almost 50 years.  Never mide the price of tickets at the Air Canada are astonomical. Toronto fans will always love the Leafs.  They will always support them.

In 2015, the Argos suffered through a lost season, which they could ill-afford.  During the Blue Jays play-off run, they were forced to play their home games out of town, rather than at the Rogers Centre.  For six successive weeks, they were on the road and they were completely overshadowed by the Blue Jays.  Things were supposed to improve for the 2016 season as the Argos moved into their new home at  BMO Field at Exhibition Place.  The Argos continued to be spurned as the city's soccer team, Toronto FC, was not exactly thrilled about having CFL football at BMO.

Nevertheless, the Argos began the 2016 season with a sense of optimism.  They hoped that their new home would reignite interest in the team.  Alas, this did not come to pass.  It didn't help that they were 2-7-0 in their new venue and attendance was ridiculously low.  Granted, the Argos have not marketed the team well.  They did not made their presence felt.  Still, they deserve better.  They deserve more support and more respect.  After all, the team was founded in 1873 and it is the oldest existing sports franchise in North America still using its original name.  The price of tickets is relatively affordable.

I have made the following observations:

* Toronto is not really a great sports town.  It is simply a great hockey town.  Except for the Leafs, Toronto fans are trendy fans. They are fair-weather fans.  The only team that they'll support rain and shine is the Maple Leafs.  Sadly, there is little support for the Argonauts, even when they put a winning team on the field.  In 2012, the 100th edition of the Grey Cup was held in T.O. and the Argos were victorious.  The lack of excitement was palpable.  There were no buttons, flags or honking of horns.

In 2012, I attended some Grey Cup festivities at the Metro Toronto Convention Centre.  I sat at a table in the pavilion of the Atlantic Schooners, a Maritime CFL team that doesn't exist yet.  Their claim to fame is that they are "still undefeated."  A little background:  The Schooners were a conditional CFL expansion franchise that was to begin play in Dartmouth, Nova Scotia, provided a 30,000 seat stadium were built in time for the opening of the 1984 season.  The financing for the stadium fell through and the application for the franchise was withdrawn.

Many years have passed and there is still no stadium on the East coast.  Yet, the dream of a CFL franchise in the Maritimes is still alive and kicking.  Only the Canadian Football League would have a pavilion for a team that doesn't exist.  Nevertheless, the Schooners' pavilion has some down-home East Coast entertainment and lobster rolls  When I was there in 2012, some Americans from Baltimore were sitting at my table.  Why, you may ask, were some people from Baltimore attending the Grey Cup festivities in Toronto?  Well, back in the 1990s, the CFL underwent an "American experiment," allowing several American franchises to join the league.  The experiment ultimately failed.  However, in 1995, the Baltimore Stallions became the first American-based franchise to win the Grey Cup.  The team folded, but the American fans at my table had fond memories of the Stallions and the 1995 Grey Cup.

This year I went downtown on the Friday before the Grey Cup.  I enjoyed talking to some fans from Calgary fans resplendent in red soups and cowboy hats.  I also spoke to some enthusiastic fans from Regina.  Those Saskatchewan Roughrider fans are remarkable in their devotion to their Green Riders and their loyalty to the CFL.  They travel a long way to attend a Grey Cup in Toronto, even when their team is not in the game.  That's what "Rider Pride" is all about.  They and visitors from other parts of Canada must have been disappointed by the ho-hum attitude of the host city.

The Saskatchewan fans told me all about the new home of the Riders.  The team is set to open the 2017 season at Regina's Mosaic Stadium.  The new state-of-the-art facility has a seating capacity of 33,000, which can be expanded to 40,000.  There will be no problem selling it out.  Yes, I know!  Saskatchewan doesn't have any other big league teams.  Toronto is much bigger and has several pro teams.  Remember though, that Toronto has a much larger population.  The population of the entire province of Saskatchewan was 1,150,532 on July 1, 2016.  The Greater Toronto Area has a population of over 6 million.  This season, the Argonauts attracted an average crowd of only 16,380.3 at BMO Field.  Seating capacity at BMO is 27,000.

* Many Toronto sports fans believe that Canadian leagues are second rate.  The history and the tradition of the Grey Cup doesn't matter to them.  They prefer the glitz and glamour of the Super Bowl.  They are memorized by Beyonce, Katy Perry and Bruno Marx.  The CFL is not glitzy.  It's fun and quirky.  Most of all, it's a piece of Canadiana.  It's ours and it brings Canadians together from coast to coast.

In 2017, the Grey Cup will be held in Ottawa.  It will coincide with the celebration of Canada's 150th birthday.  I'm sure there will be more enthusiasm there.