A Tribute to E.B. White

''E. B. White was a great essayist, a supreme stylist. His literary style was as pure as any in our language. It was singular, colloquial, clear, unforced, thoroughly American and utterly beautiful. Because of his quiet influence, several generations of this country's writers write better than they might have done. He never wrote a mean or careless sentence. He was impervious to literary, intellectual and political fashion. He was ageless, and his writing was timeless"


E.B. White's literary achievements were incredibly diverse.  Herbert Mitgang, in his New York Tines obituary for the great writer, stated that "Mr. White's writing was appreciated by generations of readers of every age,"  Not only was E.B. White the author of such beloved children's classics as Charlotte's Web, Stuart Little and The Trumpet and the Swan," but he published over 17 books of prose, poetry and sketches.  His adult books include One Man's Meat, The Second Tree from the Corner, Letters of E. B. White, The Essays of E. B. White, and Poems and Sketches of E. B. White.  He also revised and expanded The Elements of Style, William Strrunk Jr.'s influential guidebook for American English usage.

Elwyn Brooks White was born 117 years ago today (July 11, 1899) in Mount Vernon, New York.  He was the youngest child of Samuel Tilly White, the president of a piano company, and Jessie Hart White, the daughter of Scottish-American artist William Hart.  Samuel and Jessie had moved their family from Brooklyn to Mount Vernon because as E.B. put it,  ''Mount Vernon sounded tonier.''

In 1921, E.B. White graduated from Cornell University with a Bachelor of Arts degree.  White, who was editor of his school's newspaper, The Cornell Sun, decided to pursue a career in journalism.  After graduation, he worked as a reporter for the United Press and the Seattle Times.  In 1927, he joined the staff of The New Yorker and was a contributor to the magazine for almost six decades.  He was best known for his essays and "Notes and Comments" pieces.

When cartoonist and author James Thurber came to The New Yorker, also in 1927, the two shared an office and played an integral and distinctive role at the magazine.  Thurber described his colleague as a private man who shunned publicity.  In his profile of E.B. White in Credos and Curios, Thurber wrote about how during their time at The New Yorker, White would slip away to a nearby restaurant to avoid a visitor he didn't want to see.  E.B., he said, "avoided the interviewer, the photographer, the microphone, the rostrum, the literary tea, and the Stork Club (a prestigious, upscale Manhattan nightclub from 1929 to 1965)."

At The New Yorker, White and Thurber were packed into small quarters with, according to White, "just room enough for two men and two typewriters."  Still, they managed to collaborate on The New Yorker's "Talk of the Town" section.  In 1929, the duo co-wrote a takeoff on psychology titled Is Sex Necessary? Or, Why You Feel the Way You Do, a book that featured Thurber's cartoons.  Thurber, however, left The New Yorker in the mid-1930s.

In 1929, E.B. White married Katharine Sergeant Angell, who served as fiction editor for The New Yorker from 1925 to 1960. They met in 1926 at the magazine.  E.B. recalled the moment of their first meeting in a 1980 interview with Nan Robertson for The New York Times.  He had already submitted "two or three short things" to The New Yorker, a then-fledgling publication.  "She came striding out into the reception room where I was waiting.  'Are you Elwyn Brooks White," she said, and I said, 'I am.'  She had a lot of black hair and was very beautiful."

According to White, their love affair was "stormy."  "She was a divorced woman," he told Robertson, "but a conscientious mother with two children."  "I was six years younger than she. We finally went off and got married one day."  Years after the wedding, he wrote: "I soon realized I had made no mistake in my choice of a wife. I was helping her pack an overnight bag one afternoon when she said, 'Put in some tooth twine.' I knew then that a girl who called dental floss tooth twine was the girl for me."

Katharine and E.B, had a son, Joel White (born 1930), who became a prominent U.S. naval architect and boat builder.  E.B. was also stepfather to Roger Angell (born September 19, 1920),and Nancy Angell Stableford (December 7, 1916 - August 3, 1996), Katharine's children from her first marriage to Ernest Angell, the President of the American Civil Liberties Union from 1950 to 1969.

In 1933, E.B. White and his wife purchased a spacious old farmhouse in Maine.  They lived there almost steadily from 1938 on. It became White's refuge, the placed where he enjoyed the privacy and serenity he had always sought.

While living on that farm in Maine, E.B. White was inspired to write his great children's classics Chartlotte's Web and Stuart Little.  He told American photographer Jill Krementz, “I like animals and it would be odd if I failed to write about them. Animals are a weakness with me. When I got a place in the country I was quite sure animals would appear, and they did.”

E.B. thought up the idea for Charlotte's Web after observing a spider at his farm. “I had been watching a big grey spider at her work and was impressed by how clever she was at weaving. Gradually I worked the spider into the story that you know, a story of friendship and salvation on a farm.

In 1959, Macmillan and Company commissioned E.B. White to modernize and revise William Strunk's English style manual The Elements of Style.  Strunk, who had been White's English professor at Cornell University, originally composed the manual in 1918.  The following year, Strunk's guidebook, was privately published for in-house use at Cornell.  It was then republished by Harcourt Press in 1920.  The original version  was a slim book containing eight "elementary rules of usage," ten "elementary principles of composition," "a few natters of form," 49 "words and expressions commonly misused" and a list of 57 "words often misspelled."

E.B. White's update of The Elements of Style was highly successful and it became know informally as "Strunk & White." Professor Strunk and his his student were both advocates of concise writing. Strunk's recommendation was to "omit needless words."  White, for his part, described the professor's little book as a "summation for the case for cleanliness, accuracy and brevity" in the use of English. 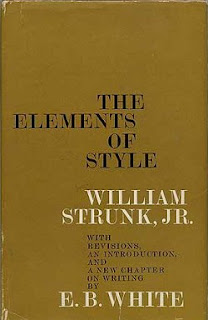 In 1961, Katharine White developed a rare and debilitating skin disease.  Cortisone treatments affected her appearance and caused her bones to disintegrate.  Toward the end of her life, she suffered five congestive heart failures.  She passed away in 1977.

E.B. White died on October 1, 1985 at his home in North Brookin, Maine, where he had lived for almost half a century.  He was 86 years old at the time of his death and had suffered from Alzheimer's disease.  William Shawn, onetime editor of The New Yorker, said of White:  "His connections with nature were intimate and ardent. He loved his farm, his farm animals, his neighbors, his family and words."

* In 1963, President John F. Kennedy presented E.B. White with the Presidential Medal of Freedom.  In 1971, White received the National Medal for Literature,

* E,B, White never liked his given name, Elwyn.  He said, "My mother just hung it on me because she'd run out of names.  I was her sixth child."  In college, he acquired the nickname "Andy," after Andrew D. White, the first president of Cornell University.  It was customary at Cornell to bestow that moniker on students with the last name of White.

* E.B. White and Katharine were married for 48 years, until her death on July 20, 1977 at the age of 84.  It was difficult for White to adjust to life without her.  In 1978, when Onward and Upward in the Garden, based on Katharine's New Yorker writings, was published, he wrote in the introduction: ''Life without Katharine is no good for me.''

* Joel White died of lung cancer on December 5, 1997 at his home in Brooklin, Maine.  He was 66 years old at the time of his passing.  His obituary in the The New York Times stated that he was "one of the country's foremost designers of wooden boats."

* E.B. and his stepson , Roger Angell, were very close.  Angell now 95 years old, is an accomplished writer, essayist and baseball writer.  He was the chief fiction editor of The New Yorker for many years and a regular contributor to the magazine.  In its February 14, 2005 issue, The New Yorker published an article by Roger Angell about his renowned stepfather.  It is simply titled "Andy" and here are its opening lines:


Lately I have been missing my stepfather, Andy White, who keeps excusing himself while he steps out of the room to get something from his study or heads out the back kitchen door, on his way to the barn again. He’ll be right back. I can hear the sound of that gray door—the steps there lead down into the fragrant connecting woodshed—as the lift-latch clicks shut. E. B. White died in 1985—twenty years ago, come October—and by “missing” I don’t mean yearning for him so much as not being able to keep hold of him for a bit of conversation or even a tone of voice.

Companies in Film: Where Would You Work?


Here is an infographic about companies in film.  I hope you find it interesting and fun.

Where in the World (of Movies) should you work? by Euroffice.
Posted by Joanne at 11:42 AM No comments: