The Brooklyn Dodgers and Ebbets Field


In Brooklyn, it was as though you were in your own little bubble. You were all part of one big, but very close family, and the Dodgers were the main topic of everybody’s conversations and you could sense the affection people had for you. I don’t know that such a thing exists anymore.

ON THIS DAY 99 YEARS AGO 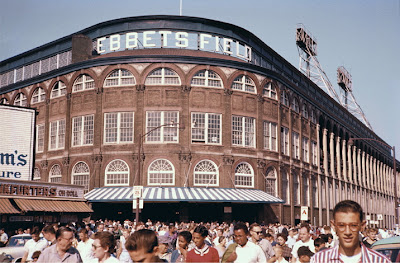 On March 4, 1912, the groundbreaking ceremony was held for Ebbets Field, the Brooklyn Dodgers’ new stadium. The ballpark was named in honour of Charles Ebbets, the Dodgers’ bookkeeper. In 1905, Ebbets went deeply into debt to purchase the Dodgers and keep them in Brooklyn.  The new stadium was constructed in just over a year at cost of $750,000.  The first game was played there on April 9, 1913.

Fans of the Dodgers fondly referred to them as “dem bums”. The Brooklyn team, however, had its moment of glory. “Dem bums” actually won the World Series in 1955 over the New York Yankees. Just two years later, in 1957, the club was moved to Los Angeles. Real estate business man Walter O’Malley, who had acquired majority ownership of the team in 1950, decided to relocate the team westward.

By 1957, the beloved home of the Brooklyn Dodgers had deteriorated badly. It appeared worn and outdated. Attendance was sagging badly. When Los Angeles officials offered O’Malley what he wanted – an opportunity to purchase land suitable for a ballpark, ownership of the new stadium and control over its revenue – he accepted the deal. The loss of the Dodgers was quite a blow to Brooklyn. Comedian Joe Flaherty said that when they left, “it was not only a loss of a team, it was the disruption of a social pattern. A total destruction of a culture.”

The Brooklyn Dodgers played their final game at Ebbets Field on September 24, 1957. They defeated the Pittsburgh Pirates by a score of 2-0. It was the end of an ear so fondly remembered by so many people. That is why I wish I could have attended a game at Ebbets Field in its heyday. If I possessed a time machine, I’d arrange to be a fan there for just one game.  There was an unforgettable character at  Ebbets Field I would certainly enjoy watchng.  Her name was Hilda Chester and she sat in the bleachers ringing a brass cowbell.  Her face was pink and her hair was stringy.

I must admit that I had never heard of Ebbets Field until I studied Arthur Miller’s Death of a Salesman in high school. Ebbets Field is mentioned frequently in the play. If you enjoy baseball nostalgia, especially concerning the Brooklyn Dodgers, I recommend the book Wait Till Next Year: A Memoir by Doris Kearns Goodwin. It is the childhood memories of a girl growing up in a New York suburb during the 1950s and her love for the Brooklyn Dodgers.


RANT OF THE DAY

It is one thing for journalists or even the public to use the more partisan “Harper government", but it is another thing for the state to equate the Government of Canada with the leader of the governing party.

- Jonathon Rose, a specialist in political communications at Queen's University.

According to a Canadian Press story yesterday by Bruce Cheadle, a directive went to public servants late in 2010 that “Government of Canada” in federal communications should be replaced by the words “Harper Government.”

Are you upset by this revelation? After what I’ve seen of the way the Harper government operates, it doesn’t surprise me one iota. It does, however. upset me considerably. I am appalled by such unmitigated gall. In fact, it makes my blood boil! “The Government of Canada” belongs to the Canadian people, not to any political party or prime minister. It is not the exclusive domain of Stephen Harper or the Conservative Party.

Back in 1979, when Joe Clark’s government formed a minority government, Clark was criticized and ridiculed for saying that he intended to govern as if he had a majority. About nine months later, his government’s budget was defeated in the House of Commons. An election was called and the Liberals were returned to power with a majority.

What’s going on with Sidney Crosby? How bad is his concussion? I hope he’ll be playing again soon, but I’m getting some scary vibes. The NHL can’t afford to be without Crosby for too much longer. The number of concussions in the league continues to rise. The NHL shamelessly refuses to crackdown. It refuses to stop the unnecessary brutality. We’ve just learned what happened to Bob Probert’s brain.

Posted by Joanne at 5:34 AM No comments: