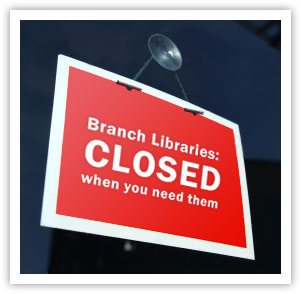 Hey Toronto, the battle to save our public libraries is far from over.  Mayor Rob Ford continues with his plans to attack one of the most precious assets that this city has.  This is what our mayor has planned for the good citizens of Toronto.

* Ford has requested a 10% budget cut of all city departments. The Toronto Library Board has already accepted a cut of 5.7% (including job reductions) from its budget,  That, however is not enough to satisfy Mr. Ford.  In December, the library board is scheduled to vote on further cost-saving measures that would reduce the operating hours of neighbourhood branches. by 20%.  This will result in reductions in operating hours for Toronto's public libraries of between six to 13 hours a week.  Note: The majority of neighborhood branches are now open for approximately 50-69 hours a week.

*  If the cost-cutting plan is adopted, eight public libraries will be closed on Sundays.

These actions will have great repercussions and disastrous results.

1.  Toronto City Hall is considering privatizing some or all of our free public library system as has been done in some American cities.  What would this mean for library users?  For-profit libraries would mean fewer books and higher user fees at Toronto's public libraries.  If the public sector controlled our libraries, we would become library customers rather than library patrons.

2.  The public will have less access to our libraries at a time when libraries have never been used or needed more.

3.  Decent, hard-working, well-qualified librarians are in danger of losing their jobs.  They do not deserve this.  Torontonians do not deserve this.  Even if the job cuts are done through attrition (early retirement and layoffs), there will be fewer jobs in the future for library students.  Furthermore, there is no guarantee that the cost-cutting can be done without the elimination of current jobs.

City of Toronto Councillor Janet Davis (Ward 31 Beaches- East York) is against the proposed cuts to library operating hours.  Here is what she told the Toronto Star: "We already cut 200 jobs in the last 10 years and all we're doing is eroding the quality of service."  Bravo Councillor Davis! 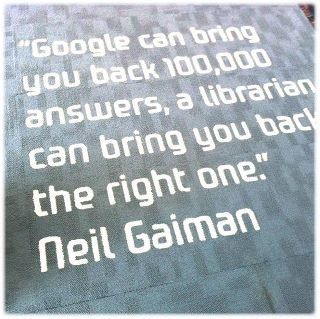 When Rob Ford ran for mayor, he said he would not cut services.  He claimed that he only intended to "stop the gravy train."  Well, he is cutting services and people will suffer for it.  Libraries are not gravy!  They are meat and potatoes.  Unless action is taken, they will be dealt a devastating blow in December.  Don't let it happen!  Don't sit back and let Rob Ford get away with it!  You can do something to stop this madness. I urge you to click on the link below and send a message to your city councillor.  Let him or her know that you won't sit idly by and allow this to happen.  Tell your counsellor that libraries matter and that you won't stand for any measures that will have a negative impact on them and on the people of Toronto.  No monetary value can be placed on something as valuable as our public libraries.  This city will truly be poorer if we don't protect them for the people of today and for future generations.

CLICK ON THIS LINK AND HELP SAVE OUR PUBLIC LIBRARIES.