Eugene V. Debs: The socialist who ran for President of the United States five times 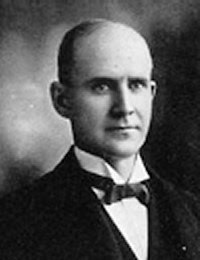 If it had not been for the discontent of a few fellows who had not been satisfied with their conditions, you would still be living in caves.  Intelligent discontent is the mainspring of civilization.  Progress is born of agitation.  It is agitation or stagnation.


With Senator Bernie Sanders of Vermont, a self-proclaimed socialist, seeking the Democratic nomination for President of the United States, I thought it would be apropos to write about another American socialist - Eugene V. Debs.  Debs, who ran as the Socialist Party's candidate for president five times between 1900 and 1920, has been an inspiration to Sanders.  In a November 12, 2015 Reuters article, journalist Alexander Heffner wrote that when he asked the Vermont senator to name his political hero , "he quickly named labor organizer Eugene V. Debs . . ."

Eugene Victor "Gene" Debs was born on November 5, 1855 in Terre Haute, Indiana. He was the third of six surviving children and the first born son.  His parents, Jean Daniel (1820-1906) and Marguerite Marie Bettrich Debs (1828-1906) were immigrants to the United States from Alsace, France. They named their first born son after French authors Eugene Sue and Victor Hugo. Interestingly enough, Debs' father did not come from a working class background.  Jean Daniel Debs, was a member of an affluent family who owned a textile mill and a meat market in France.  In Terre Haute, Debs' parents owned a small grocery store at the front of the family's two-story home. 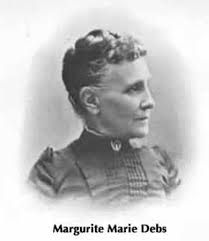 When he was just 14 years old, Eugene Debs dropped out of high school and left home to work as a paint scraper in the railroad yards.  He later became a locomotive firefighter and attended night classes at a business college.  In 1874, at his mother's urging, he left his job as a railway fireman and returned to Terre Haute.  He found employment as a billing clerk at Hulman & Cox, a wholesale grocery firm.  Although no longer a railroad employee, Debs' was interested in labour issues.  He remained a strong supporter of the Brotherhood of Locomotive Firemen and used his salary to assist the local union in Vigo County, Indiana.

While young Gene was working at the Hulman & Cox warehouse, he and some of his friends founded the Occidental Literary Club of Terre Haute.  As president of the club in 1875, Debs brought many famous personages to Terre Haute.  These included such outstanding speakers as lawyer and political leader Col. Robert Ingersoll, writer and poet James Whitcomb Riley, social reformer and feminist Susan B. Anthony, orator and lawyer Wendell Phillips and others.

In 1878, Debs was made assistant editor of the National Brotherhood Of  Locomotive Fireman's Magazine.  In 1879, he was elected on the Democrat ticket to the first of his two terms as City Clerk of Terre Haute.  The following year, he was named Grand Secretary of the Brotherhood of Railway Firemen and editor of the BLF Magazine.  His political career began to rise in 1884 when, as a Democrat, he was elected state representative to the Indiana General Assembly, representing Terre Haute and Vigo County.  He served one term in 1885.

Around that time, there were also major changes in Eugene Debs' personal life.  On June 9, 1885. at the age of 29, he married Katherine "Kate" Metzel, the stepdaughter of a prominent Terre Haute druggist named John Jacob Baur.  The couple did not have any children.

In 1890, Debs and his wife built and moved into a beautiful home in Terre Haute at 451 North Eigth Street.  According to the biographical sketch in Gentle Rebel: Letters of Eugene V. Debs, edited by J. Robert Constantine, the house "was a source of controversy from time to time." and that it was regarded as "tasteless" for a labour organizer to build such a grand home in an upscale neighbourhood.

The Debs home is now a National Historic Landmark,of the National Parks Department of Interior of the United States. Located on the campus of Indiana State University, it is an official historic site of the State of Indiana.and is known as the Eugene V. Debs House Museum. 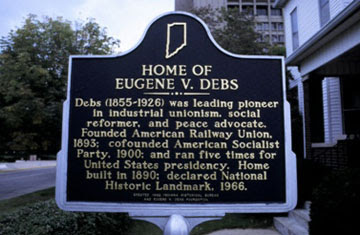 Eugene Debs organized the the American Railway Union (ARU). in Chicago in 1893.  With Debs as its president, the ARU was an independent union of 150,000 members and it was the first industrial union in the United States.  In April of 1894, Debs' union conducted a strike for higher wages against the Great Northern Railway . The strike lasted for 18 days after which the railway acceded to the demands of the union.

The next month, Debs became deeply involved in one of the most significant strikes in American history.  The conflict began on May 11, 1894 outside of Chicago, when workers at George Pullman's Palace factory walked out as a protest against a series of wage reductions and other grievances.. Some of the Pullman workers were members of the American Railway Union, led by Eugene V. Debs.  The strike was long and bitter.  It lasted for weeks and ARU members refused to handle trains with Pullman cars. Consequently, the major railroad lines in and out of Chicago were tied up and much of the freight and passenger traffic in the United States west of Detroit, Michigan was shut down.  The boycott became the largest national strike in the history of the United States.

Below is a photo of striking American Railway Union members confronting Illinois National Guard troops in Chicago during the Pullman strike. 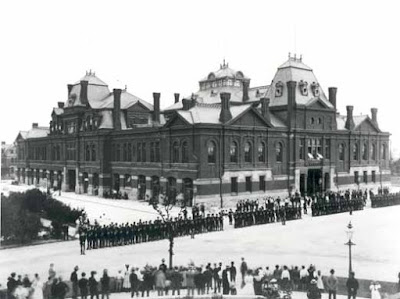 Determined to put an end to both the strike and boycott, the railway owners pleaded with President Grover Cleveland to send in federal troops to establish order.  Cleveland agreed, maintaining that the soldiers were needed to allow the movement of the mails.  The strike was ultimately crushed and many lives were lost in violent confrontations.  Eugene Debs was jailed in May of 1895 for defying a federal court's injunction.  He and other ARU leaders was incarcerated for contempt of court because they had disobeyed a federal order prohibiting them from saying or doing anything to encourage the continuation of the strike.

According to The American Nation: A History of the United States Since 1865, by John. A Garraty, one of the results of the Pullman strike was to make Eugene V. Debs a national figure. While serving a six month prison sentence at the McHenry County Jail in Woodstock, Illinois, Debs was visited by Milwaukee publisher Victor L. Berger and other well known independent socialists.  They brought him reading material such as Karl Marx's Das Kapital, which Garraty says he found "too dull to finish." He did, however, complete  Looking Backward, by Edward Bell and Wealth Against Commonwealth, by Henry Demarest Lloyd, and a variety of other works on socialist theory.  These writings influenced Debs greatly and after his release from prison in November 1895, he was to become more committed than ever to the international socialist movement.

In 1896, Debs supported the campaign of William Jennings Bryan, the Democratic candidate.for president.  Jennings, who presented himself as a champion of the working man, lost the election to his more conservative Republican opponent, William McKinley.  In 1897, Debs announced his conversion to socialism.  He was the Socialist Democratic Party's candidate for president in 1900, but only received a modest 96,000 votes. 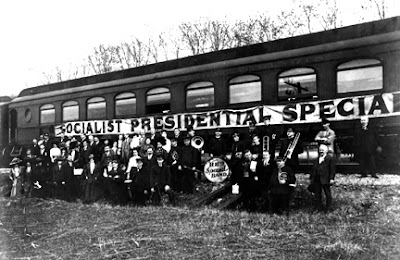 In his 1912 presidential bid, Socialist P arty candidate Eugene Debs amassed 897,000 votes, It was an election in which liberals did well and Woodrow Wilson was elected president.with 6,286,000 of the 15 million ballots cast.  Debs' vice-presidential running mate in 1912 was Emil Seidel, the mayor of Milwaukee, Wisconsin from 1910 to 1912.  Seidel had the distinction of being the first socialist mayor of a major city in the United States.

Although Debs was the initial front runner for the Socialist Party nomination in 1916, he declined to run for president.  He opted instead to run for Congress in his home district of Terre Haute, Indiana, again on the Socialist ticket.  His campaign strongly advocated keeping America neutral in World War I.  Although many of his potential constituents agreed with him, Deb was defeated in his bid for a seat in Congress.

Eugene Debs was renowned for his oratory.  On June 16, 1918, with World War I raging in Europe, he delivered a passionate anti-war speech in Canton, Ohio in which he urged resistance to the draft. On June 30, as a result of that speech, he was arrested and charged with ten counts of sedition.  He appeared before a federal court in Cleveland and addressed the court in his own defence, but was convicted under the wartime anti-espionage act. and sentenced to ten years in prison  He also lost his U.S. citizenship, which he never recovered during his lifetime. It was restored posthumously by the United States government in 1976, fifty years after his death. 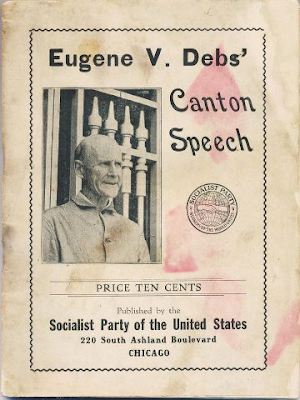 On April 12, 1919, Eugene Debs began serving his sentence in Moundsville West Virginia State prison.  Two months later he was transferred to the Atlanta, Georgia federal prison.  In 1920, while imprisoned, Debs ran for president for the fifth and final time.  He was forced to conduct his campaign from a prison cell in Atlanta.  Yet, of his five presidential campaigns, he received his highest popular vote total that year, garnering about 915,000 write-in votes.

On Christmas Day, 1921, Debs was released from prison by President Warren G. Harding. His sentence was commuted to time served.  On December 28th,, he returned to his home in Terre Haute and was given a warm welcome by thousands of well-wishers.

By July of 1922, Debs' physical and mental health were in decline due to years of constant campaigning and time spent in prison.  In order to recapture his strength, he committed himself to the Lindlahr Sanitarium in Elmhurst, Illinois.  He died of heart failure there on October 20. 1926.  Eugene V. Debs was 70 years old at the time of his passing.

*  Eugene Debs' most well known writings include a pamphlet entitled Unionism and Socialism (1904) and a book, Walls and Bars (1927).

Posted by Joanne at 3:21 AM No comments: