Some reflections while at home during the COVID-19 crisis 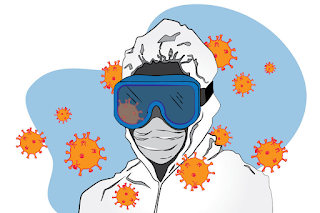 Here I am in Toronto in the midst of the COVID-19 pandemic.  Fortunately, I haven't travelled anywhere since I visited Prince Edward Island last summer, and as far as I know, I have not been in contact with anyone who has the virus.  Of course, I am taking precautions - washing hands etc.

Like many people in this city right now, I've been staying at home.  I've stopped using public transit and I only go outside to take a walk or to go to the grocery store or the pharmacy.  So, as you can imagine, I've had a lot of time to think and reflect about this pandemic.  What is happening is truly a nightmare.  The sheer volume of death and devastation, especially among the older population, is staggering.

I used to work in a newspaper library.  I am a news junkie.  I love current events and politics.  I know it's important for the public to be informed about the virus.  However, I can only take so much of this 24-hour wall-to-wall coverage.  I get the information I need and then tune out.  I am fully aware of how serious this crisis is, but I can't be completely consumed by fear and all the bad news.

The President of the United States, Donald Trump, has no idea how to deal with this crisis.  He seems incapable of soothing people's fears, or giving them true hope.  When asked by NBC News correspondent Peter Alexander to say something to calm Americans, Trump went on a tirade.  He reprimanded the correspondent and told him he was "a terrible reporter." (Alexander had challenged the president for promoting unproven drug treatments).

Trump appears clueless and incoherent.  He doesn't inspire the the trust needed at a time of crisis.  At first he didn't take the virus seriously.  He declared that it was going to magically go away.  Now he claims to have known all along that this was a pandemic.  Because of the president's mixed messages and misleading attitude, it has taken longer to provide the measures needed for the United States to combat this scourge.

When I think of how Franklin and Eleanor Roosevelt helped America and the world get through the Great Depression and World War II, it saddens me to see the lack of global leadership today.  Instead of the Roosevelts and Winston Churchill, we have Trump and Boris Johnson, Vladimir Putin and Xi Jinping.

We Canadians are doing our best to get through this crisis, but Canada is not a superpower.  Our prime minister, Justin Trudeau, does not have as much influence as the leaders of more powerful nations.  We don't have a huge population or a great deal of military might.  The leadership in the U.S. and Europe and Asia affects us profoundly.

I have never experienced war first hand.  I never lived through the Great Depression or World War II.  As bad as the current crisis is, I am glad I do not have to face bombs like the British did during the London Blitz.  Yet, I have to admit that I am scared and worried.  I am trying to stay positive and not be too stressed.  It's hard to do at this terrible time, but it sure helps.  Maybe I should listen to some of FDR's old "fireside chats" on YouTube.  They were so reassuring.

By the way, here's how History.com describes Roosevelt's "fireside chats."

From March 1933 to June 1944, Roosevelt addressed the American people in some 30 speeches broadcast via radio, speaking on a variety of topics from banking to unemployment to fascism in Europe.  Millions of people found comfort and renewed confidence in these speeches, which became known as the "fireside chats."

Below is a photo of Franklin Delano Roosevelt's June 28, 1934 "fireside chat" during the depths of the Great Depression.  He spoke about the merits of his recovery program. 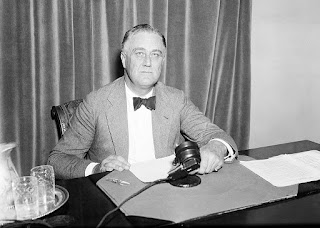 Where have you gone Franklin Roosevelt?

1.  This is one world and we are all in this together.  We are interconnected.