Robert L. May and the History of Rudolph the Red-Nosed Reindeer

Rudolph the Red-Nosed Reindeer is never mentioned in Clement C. Moore's famous poem, A Visit from St. Nicholas (better known as 'Twas the Night Before Christmas).  Moore's Yuletide tale was first published in 1823.  Prior to its publication, St. Nicholas, the patron saint of children, had never been associated with reindeer and a sleigh full of gifts.  Moore's poem specifically lists the number of reindeer and their names.

The moon on the breast of the new-fallen snow
gave the lustre of midday to objects below,
When what to my wondering eyes should appear,
but a miniature sleigh and eight tiny reindeer.

With a little old driver so lively and quick,
I knew in a moment it must be St. Nick.
More rapid than eagles, his courses they came,
and he whistled and shouted and called them by name:

"Now Dasher! Now Dancer!
Now, Prancer and Vixen!
On, Coment! On, Cupid!
On, Donner and Bltzen!


So, where did the notion of a ninth reindeer with a red nose originate, if not from Clement C. Moore's verses?  Well, the fact is that Rudolph the Red-Nosed Reindeer did not come into the picture until more than a century after the publication of A Visit from St. Nicholas.  Rudolph was the creation of Robert Lewis.May (1905-1976), a Jewish American from New Rochelle, New York.  He was the son of Milton May, a lumber merchant.  Bob had a brother, Richard and two sisters, Evelyn and Margaret.  Evelyn is the grandmother of economist Steven D. Levitt, the author of Freakonomics.  Margaret married songwriter Johnny Marks in 1947..

As a child, Bob May was diminutive, shy and nonathletic.  He was bullied and called names because he just didn't fit in.  Despite his difficult childhood, young Bob graduated Phi Beta Kappa from Dartmouth College in New Hampshire in 1926.  When the Great Depression struck in 1929, the May family lost a great deal of wealth.  They could not afford to send their younger daughter, Margaret, to college.  Margaret, therefore, took a job as a sales clerk at Macy's department store.

During the 1930s, Bob found employment as an in-house advertising copywriter for the Chicago-based Montgomery Ward Company, the second largest retailer in the United States at the time (second only to Sears).  Every year, Montgomery Ward did a Christmas promotion, purchasing products such as colouring books to give away to its customers.  Since this was a very costly endeavour, the company decided to develop its own product for the 1939 holiday season.  Bob May, who was known for writing ditties and catchy jingles was called upon to compose a story that the company could print and publish itself.

In his 1975 article for the Gettysburg Times, "Rudolph Created in a Time of Sadness," Bob wrote that it all began on a cold January morning in 1939 when he was summoned to his supervisor's office.  He was then asked to create a Christmas promotion for children.  Since it was to be a cheerful holiday booklet for shoppers, Bob's boss suggested "an animal story" with "a main character like Ferdinand the Bull."

The project came at a hellish time for Bob.  His his wife, Evelyn, was ill with cancer and he was spending much of  his paltry salary on treatments for her.  As Evelyn lay dying in their small Chicago apartment, her 34-year-old husband went to work on his assignment.  Falling back on his childhood memories of being a misfit, he created a misfit character - a reindeer with a shiny red nose who dreamed of pulling Santa's sleigh..  He chose a reindeer because his daughter, 4-year-old Barbara, was enchanted by the deer at the Lincoln Park Zoo in Chicago.  Searching for a name that was an alliteration of "red," he considered monikers such as "Rollo" and "Reginald" before deciding on "Rudolph."  In the style of Clement C. Moore's classic poem, Bob May composed his Rudolph tale in rhyming couplets.

In July of 1939, Evelyn passed away.  After his wife's death, Bob's boss told him that he did not have to fully complete his project.  It would suffice for him to just hand in the work he had already done.  Bob, however, insisted on continuing his assignment. because as he wrote in in his 1975 article, "I needed Rudolph more than ever.  Gradually, I buried myself in the writing."

Robert L. May finished the draft of Rudolph the Red-Nosed Reindeer in late August of 1939.  He then read his story to Barbara and her grandparents (May's in-laws).  "In their eyes," he wrote, " I could see that the story accomplished what I had hoped."

When Montgomery Ward printed Bob's story, the response from the public was overwhelmingly positive..  More than two million copies were distributed during the Christmas season of 1939.  A shortage of paper, due to the outbreak of World War II, prevented even more copies from being printed.  Nevertheless, the little book about the re-nosed reindeer was indeed a popular success. 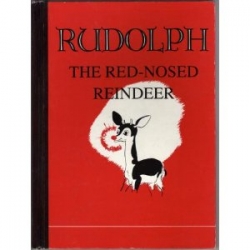 Robert May could not make any profit from his Rudolph book because the copyright was owned by his employer.  He desperately needed money to pay off the medical bills incurred by his deceased wife. In 1947, however, Montgomery Ward agreed to transfer the rights to him.  This freed Bob to make a spoken record of his Rudolph poem.  Yet Bob still had difficulty finding a publisher for his tale of the outcast reindeer.  Publishers thought the market for Rudolph was already saturated due to the millions of free booklets that had already been distributed.  Finally, Harry Elbaum, the operator of a small New York publishing house, decided to take a chance on Bob's story.  He printed 100,00 copies and they sold rapidly.


Bob Mary married for a second time in 1941.  His second wife was Virginia Newton, a fellow employee at Ward's and a devout Catholic.  Due to the success of the spoken record and  the book, Bob became prosperous enough to move his family to the affluent Chicago suburb of Evanston. During the 1950s and 1960s, he put up a huge Rudolph statue on the front lawn of his Evanston home at Christmastime.

In the late 1940s, Bob May's brother-in-law, Johnny Marks, composed  a song loosely  based on the book.  Several big-name singers were asked to record the song and turned it down.  Then, cowboy star Gene Autry  recorded the tune in 1949.  Autry wasn't particularly impressed with "Rudolph" but at the behest of his wife, he recorded it as a B-side to a single record.  In the decades that followed, it sold millions of copies and inspired an animated 1964 television special produced by Arthur Rankin, Jr. and Jules Bass.  The special was narrated by Burl Ives who also voiced the songs in it.  Johnny Marks provided the musical score.


Bob May quit his copyrighting job in 1951 and spent several years managing his Rudolph creation before returning to Montgomery Ward in 1958.  He worked there until his retirement in 1971.  That same year, Bob's second wife, Virginia passed away.and he later wed Virginia's sister.  Robert L. May died on August 10, 1976 at the age of 71.

The Montgomery Ward department store chain has been defunct since 2001.  During the 1990s, it fell victim to low-cost pricing from Kmart, Target and Wal-Mart.  It filed for Chapter 11 bankruptcy in 1997.  After emerging from bankruptcy protection in 1998, it closed 250 retail locations   The remaining outlets were renovated and the company was renamed simply "Wards."  These actions, however, did not succeed in saving the business.  On December 28, 2000, after disappointing Christmas sales, the company, founded in 1872, announced that it would shut down its remaining outlets and that its employees would be laid off.

WHO WERE RUDOLPH'S PARENTS?

Rudolph's parents are not named in the Robert L. May's 1939 version of the story.  They were not Santa's reindeer and they lived in a different village, not the North Pole.  In May's tale, Santa comes upon Rudolph while delivering Christmas presents to Rudolph's house on a foggy Christmas Eve.  He is concerned about the worsening weather and, noticing Rudolph's glowing nose, he enlists his help to ensure the safe deliverance of the children's gifts.  In the popular Johnny Marks song, however, Rudolph definitely lives among Santa's reindeer.  Although his parents are not identified, we are told that "all of the other reindeer used to laugh and call him names" and that "they never let poor Rudolph join in any reindeer games."

In the 1964 Rankin/Bass television special, Donner is portrayed to as Rudolph's father.  Rudolph's mother is not deemed worthy of her own name and is only referred to as Mrs. Donner.  As for Donner, he is presented as a macho jock type.  He coaches the young bucks and supervises them in their reindeer games wearing a whistle around his neck.  When Rudolph runs away, Mrs. Donner helps her husband search for their son, even though Coach Donner does not want her to assist him.