Should Americans of faith vote for Donald Trump or Joe Biden? 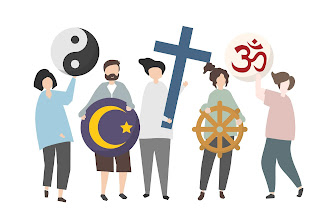 Let me be clear. The main purpose of this article is not to judge Donald Trump and Joe Biden as human beings.  My intention is to argue which candidate's public actions and policies align more closely with the beliefs of people of faith.

According to President Donald Trump, Joe Biden is "against God,” “against the Bible,” and “essentially against religion."  That statement is simply not true and it is utter nonsense.  Joe Biden is a flawed human being, but he displays empathy and compassion for others.  He truly cares about the suffering of others.  He is a devout, practising Catholic.

By his actions, Donald Trump has demonstrated that he has no use for religious faith unless it serves his interests.  He has used people of faith as a means of attaining his goal of achieving political power and holding on to it.

Remember how the American president displayed the Holy Bible as a prop for a photo op last spring?  After police used tear gas on peaceful protesters outside the White House, Trump held up a Bible in front of nearby St. John's Episcopal Church.   He offered no prayer and no words of comfort to beleaguered Americans.  It was pure theatrics.  Appearing on NBC's Today show, Bishop Mariann Budde, of the Episcopal Diocese of Washington, D.C., stated that Trump held that Bible "as if it were an extension of his military authoritarian position."  She called it "an abuse of the spiritual tools and symbols of our sacred space." 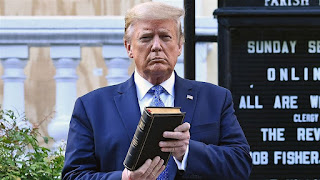 Rabbi Jack Moline, president of Interfaith Alliance, had this to say: "Seeing President Trump stand in front of St. John's Church while holding a Bible in response for calls for racial justice - right after using military force to clear peaceful protesters - is one of the most flagrant misuses of religion I have ever seen."

The Rev. James Martin, an eminent Jesuit priest and scholar, issued this statement: "Using the Bible as a prop while talking about sending in the military, bragging about how your country is the greatest in the world, and publicly mocking people on a daily basis, is pretty much the opposite of all Jesus stood for."

Donald Trump is forever the showman, even when it involves  that which is sacred.  He is the consummate reality show host.  He should have remained in the realm of entertainment and spared the United States and the rest of the world the four nightmarish years of his presidency. 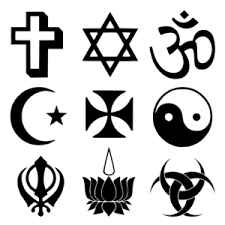 Devout followers of the Jewish, Christian, Muslim, Hindu, and Buddhist faiths, or of any any other, should keep in mind that the president has shown little respect for their beliefs.  He'll defend them, however, if it will help him get elected.

It was conservative evangelical Christians who helped Donald Trump win the White House in 2016.  Eighty per cent of Evangelicals voted for Trump, mostly because of the issues of abortion and LGQT rights.  They voted for Trump despite the fact that his major policies are polar opposite to basic Judeo-Christian beliefs.

What does the president really think of evangelicals and their beliefs?  In his book Disloyal, Michael Cohen, former fixer and lawyer to Donald Trump, Cohn describes how Trump reacted after a meeting with evangelical Christians priory to his win in the 2016 election.  According to Cohen, Trump remarked after the meeting, "Can you believe people believe that bulls---?"

Is Michael Cohen the most credible witness of Trump's behaviour?  The only thing I can say is that Cohen had no reason to lie about what Trump said.  What could he possibly have gained from that revelation?  Cohen has committed crimes for Trump's sake.  He has gone to prison and he has nothing to lose by coming clean.  He spent a great deal of time with the president and knows him well.  So, I implore evangelicals to consider what the president has said about you behind your back before you cast your vote.

In the Book of Genesis, humans are called to be stewards of God's creation.  They are given a moral obligation to protect the earth and its plant and animal life.  Donald Trump has called climate change a "hoax."  He has encouraged Americans to use non-renewable sources of energy, fossil fuels such as oil and coal.  He has lifted environmental restrictions.  He has pulled the United States out of the Paris Climate Accord.

We already know about Donald Trump's attitude toward people of the Islamic faith.  He has shown nothing but contempt for Muslims.  He regards them as foreigners, terrorists and un-American.  As for people of the Jewish faith, here's what Trump really thinks.  Washington Post reporter Greg Miller related the following anecdote.  "After phone calls with Jewish lawmakers, Trump has muttered that 'Jews are only in in for themselves.'" and 'stick together' in an ethnic alliance that exceeds other loyalties, officials said."  Although the sources for this anecdote have not been named, there are more than one, and it does jibe with some other public remarks the president has made.

Donald Trump has highlighted what he considers the dual loyalty of American Jews.  For example, in a 2019 speech to American Jews, he referred to Israeli Prime Minister Benjamin Netanyahu as "your prime minister" and Israel as "your country."  As Jonathan Chait writes in his September 23, 2020 piece in The Intelligencer: "Anti-Semitism comes in many forms.  Trump is absolutely not an eliminationist anti-Semite, like Hitler.  In some ways he admires Jews and attributes to them attributes of selfishness and shrewdness that recommend them as underlings and partners.  Like Richard Nixon, he is able to combine personal anti-Semitism with a public record of support for Israel.  What can't be denied, however, is that he is an anti-Semite."

For people of faith, the choice for president is a no-brainer.  Joe Biden will try his best to heal a nation that is divided and consumed with hate and violence.