"Many forms of Government have been tried, and will be tried in this world of sin and woe.  No one pretends that democracy is perfect or all-wise.  Indeed it has been said that democracy is the worst form of government except for all those other forms that have been tried from time to time . . ."
Winston S. Churchill
November 11, 1947
"Any chance of success depends entirely on the outcome of this election.  This administration has shown it will tear our democracy down if that's what it takes to win . . . Do not let them take away your power.  Do not let them take away your democracy."

- Barrack Obama
2020 Democratic Convention
I am heartened by the record-breaking turnout of voters in this turbulent 2020 U.S. presidential election.  This is proof that democracy is still very much alive in the United States.  However, I am not exaggerating when I say that American democracy is still in dire peril.  I don't write those words frivolously and I don't take them lightly.

The 2020 U.S, presidential election is nearly over, thank goodness.  The day of reckoning for American democracy is almost here.  November 3rd is just one day away and the finish line is in sight.  I can't vote tomorrow because I am a Canadian, but  if were a citizen of  the United States right now, I would devote almost all my time to campaigning against Donald Trump.  Nevertheless, I urge my American friends to take nothing for granted.  Just get out there and vote.  Bring this nightmare to an end.
From a Canadian perspective, I find some aspects of this U.S. election rather unsettling.  The thought of armed Trump supporters at polling booths is foreign to me.  I have never considered or expected any armed persons to intimidate me at a polling station, nor have experienced long lineups when I've voted - granted there is a much larger population in the United States.  However, it seems so strange that every state has different election rules.  Here in Canada, we have Elections Canada and voting is overseen by the federal government.  I have never used a voting machine and I have always just marked an "X" on my ballot.
Canada has an enormous stake in the outcome of this election.  What happens to our southern neighbours affects us deeply.  It affects us socially, economically and politically.  It also affects the rest of the world.  Here's what is so confounding: Donald Trump is extremely unpopular outside of the United States.  Many non-Americans cannot fathom how such a man can have the support of so many Americans.  They wonder how Americans  even consider re-electing this president after what he's done - the corruption, the lying, the racism, the sexism and misogyny, his refusal to control COVID-19 and the lives that have been lost unnecessarily because of it, the bullying, his disregard for environment concerns and climate change, the cruel separation of migrant children from their parents. . .I could go on and on.  The list is very very long.  Trump has really lowered America's standing in the world.  If he leaves office, a shaft of light will begin to shine around the globe.
There is a malaise in the United States, a moral sickness (When I say this, I am not speaking from a sense of Canadian smugness or superiority.  Canadians are not immune to violence and racism and right-wing extremism).  Trumpism is a manifestation of that moral sickness.  I find it difficult to understand how so many people can support a man who has said and done the terrible things that Donald Trump ha.  First of all, his remarks about Access Hollywood remarks about assaulting women should have disqualified him.  I don't know how anyone, especially a woman, could support him after those remarks.
I am not a conservative, but I respect the right of others to have different views.  It's not Donald Trump's conservatism I object to.  It's Trumpism I object to.  It's his extreme right-wing racism, his corruption, his lack of empathy, his criminal behaviour.  He thinks loyalty to him means loyalty to America.  He calls his supporters great patriots.  Those who oppose his policies are his foes.
Trump and his supporters are determined to suppress the vote.  Don't let them do it.  Exercise your right to vote, a right that far too many people in this world don't have, and far too many take for granted.  This is a watershed election. It is probably the most consequential election in American history. American democracy is facing its biggest threat since World War II.
This time, the threat to democracy is domestic.  The danger comes from within.  Donald Trump is an authoritarian and he is hellbent on destroying the rule of law.  It is unlikely that democracy in the United States can withstand another four years of the Trump presidency.  It has really taken a beating from almost four years of this administration. 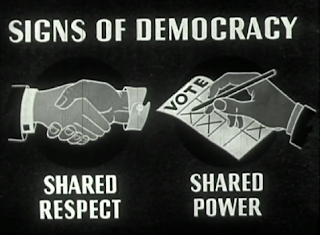 The signs of a healthy democracy are shared respect and shared power.  Donald Trump and his loyal backers, such as Mitch McConnell, Jim Jordan and Lindsey Graham, do respect their political opponents.  They do not want to work with Democrats to build a better country.  They want to utterly destroy their partisan foes.
Donald Trump and his ilk are not like the late John McCain.  McCain was a conservative but he respected the views of his political opponents.  He formed friendships with them and he did not make personal attacks on them or call them names.
The world is changing and the Republican Party is on the wrong side of history.  It is going to have to adapt to the new reality or become extinct.  The demographic trends do not favour the party of Mitch McConnell, Chuck Grassley and Lindsey Graham.  Younger Americans, non-white Americans and female Americans want their say.  They want a greater share in the power and control of government and society.  Older white males are reluctant to give up their power and control.  They are afraid of change.  That's a fear that Donald Trump has tapped into.  His slogan, "Make America Great Again" is really a dog whistle for "Make American  White and Male Again."
Those who are eligible to vote should do so as soon as possible.  I am pleased that so many people have already voted and that they have been willing to endure long lineups in order to exercise their franchise in the midst of a deadly pandemic.  Joe Biden has to win decisively.  Who knows what tricks Trump will pull to declare himself the winner.  He will not go gentle into that good night.  He will not graciously concede defeat.  That is not in his nature.  He is at heart an authoritarian.  He admires Vladimir Putin and has no real use for democracy.
Please get out there and vote.  Defeat Trump and let the healing begin!  Bring some hope to world suffering from a deadly pandemic.  Help stamp out the scourge of Trumpism.
- Joanne
Posted by Joanne at 11:30 AM