Blockbuster Baddies: Who is the Most Villainous Actress of All Time?

Here is a great infographic for film buffs.  Have you ever wondered about who is the most villainous actress of all time?  Here are some statistics and graphics to provide you with the answer.  I hope that you find this informative and entertaining.

Bellatrix Lestrange, Mystique and Cruella de Vil.  All familiar names with movie buffs and filmgoers alike due to their cunning, cruelty and villainousness.  One of the greatest female baddies, Maleficent, is due to return to cinema screens in October.in Maleficent: Mistress of Evil.  Played by Angelina Jolie, her character is a powerful fairy who curses the King's daughter.

Casino Kings have trawled through almost 1,000 movie bios to find the most villainous actress of all time and which villainous role they're most likely to portray.  Hare are the results.

Glenn Close is the most villainous actress of all time, playing villains in 29% of her movies. She is perhaps most recognisable in her role as cruel dalmatian owner and fur enthusiast Cruella de Vil in the Disney classic 101 Dalmatians.  Close is closely followed by British actress Helena Bonham Carter, who famously portrays Bellatrix Lestrange in the Harry Potter franchise.

Unsurprisingly a cheating partner takes the lead for the most villainous role, with a slippery thief and corrupt authority coming in close seconds.

The USA tops the charts for the most villainous as 8 of the 10 actresses are American. 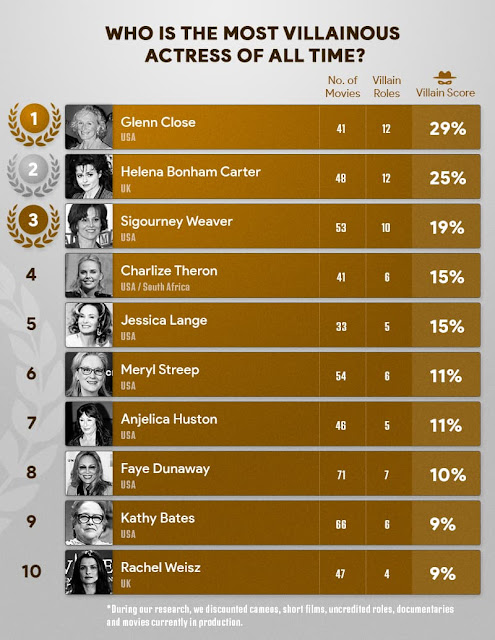 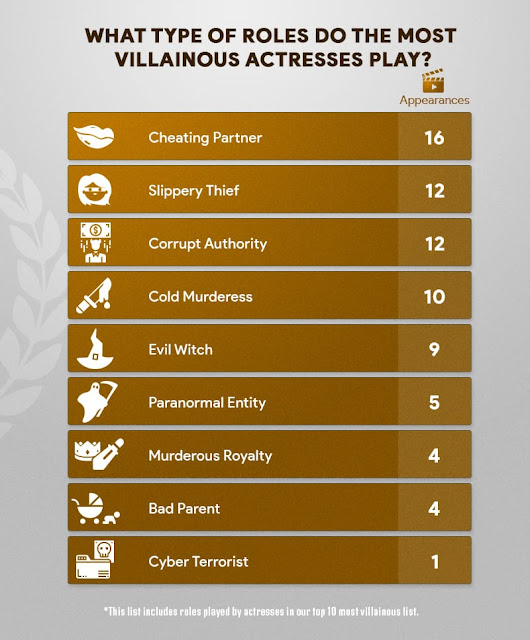 https://www.casinokings.com
Posted by Joanne at 2:11 AM