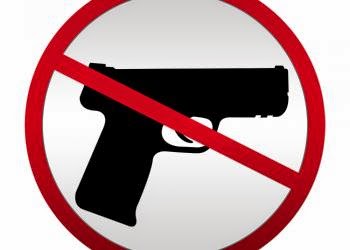 A two-year-old boy is without a mother.  Why?  Here's why.  On December 30. 2014, the toddler accidentally killer his mother with a concealed weapon.  The tragedy occurred in a crowded Wal-mart store in Hayden, Idaho.  The little boy was seated in a shopping cart when he pulled out a loaded handgun from his mother's purse.  The gun went off, ending the life of Veronica J. Rutledge, 29, an employee of the Idaho National Laboratory.  Veronica was a nuclear scientist and, by all accounts, a highly intelligent woman. She was also a gun enthusiast and firearms played a significant role in her life.

Veronica and her husband enjoyed hunting and they practised at shooting ranges.  A close friend, Sheri Sandow, had this to say about the deceased in a December 31, 2014 report by Terence McCoy in the Washington Post: "She was just as comfortable at a camp ground or a gun range as she was in a classroom."  Sandow also made some remarks about the attitude toward guns in her state.  She told The Post that in Idaho "we don’t have to worry about a lot of crime and things like that."  For Idahoans, however, "to see someone with a gun isn’t bizarre," stated Sandow.  Her friend Veronica "wasn’t carrying a gun because she felt unsafe. She was carrying a gun because she was raised around guns."

The tragic and unnecessary death of Veronica Rutledge really upset me.  Those who oppose gun control measures are very fond of saying "Guns don't kill, people do."  That slogan is extremely annoying and completely misleading. In a perfect world, firearms would never fall into the hands of the mentally ill, thieves and children.  As we are well aware, this is far from a perfect world.  It is a world where guns frequently fall into the wrong hands and accidents happen, often with deadly consequences.  In the heat of the moment, people are driven to act violently.  The more guns in circulation, the more unnecessary deaths will occur.  Tragedies such as the one in Idaho happen in places with lax gun control laws.  The attitude toward guns in the United States is pure madness.

No matter what I say, though, the gun crazies won't change their mind.  They'll continue to rant about their "constitutional right to bear arms,"  Meanwhile, a young wife and mother never had the opportunity to ring in the New Year with friends and family.  She never saw 2015.  Her motherless two-year-old will have to live with what happened for the rest of his life.  It will be a tremendous emotional burden on him and he will undoubtedly suffer psychological trauma


The National Rifle Association (NRA) and right-wing Republicans will express sadness about the tragedy.  At the same time, however, they will argue that Veronica Rutledge should have been more careful with her firearm.  They will claim it's not their fault if gun owners are negligent.  Well, I say that Veronica Rutledge was a victim of an American social culture that accepts and approves the casual ownership of firearms.  She lived in a country that glorifies guns in motion pictures and on television.  She is dead because of the Wild West mentality of U.S. society.

Veronica's father-in-law, Terry Rutledge, also a gun enthusiast, isn't too thrilled about gun-control advocates using his daughter-in-law's death to promote their cause.  “They are painting Veronica as irresponsible, and that is not the case,” Rutledge told The Washington Post. " I brought my son up around guns, and he has extensive experience shooting it. And Veronica had had hand gun classes; they’re both licensed to carry, and this wasn’t just some purse she had thrown her gun into.”

Sadly, Mr. Rutledge misses the point.  The issue isn't about whether his daughter-in-law was careless or not.  The problem lies with American society and its increasing acceptance of guns everywhere. Why should it be considered normal and necessary to possess a concealed firearm while engaged in day to day activities?

For the Rutledge family and many other Americans, carrying a concealed gun while shopping in a Wal-mart store is normal behaviour.  Guns are part of everyday life.  They just don't see anything wrong with carrying weapons all the time.  The NRA and right-sing political movements are relentless in their crusade to defend the proliferation of firearms in America. That is why I appeal to more reasonable public figures and ordinary citizens to speak out in support of stricter gun control. As a reminder of what's at stake, I add the shooting of Veronica J. Rutledge to the following list.

LIST OF U.S. GUN TRAGEDIES THAT SHOULD NOT BE FORGOTTEN

James Brady: In January of 1981, Ronald Reagan Jim Brady Assistant to the President and White House Press Secretary.  On March 30, 1981, a deranged man, John Hinklley, Jr. tried to assassinate President Reagan in Washington, D.C.  Brady was one of four people shot in the assassination attempt and received a serious head wound.  Both Reagan and Brady survived their shootings. However, Brady was left with slurred speech and partial paralysis.  After his death, he and his wife, Sarah, became outspoken advocates for gun control.  They lobbied for stricter handgun control and assault weapon restrictions.  As a result of their efforts The Brady Handgun Prevention Act, also known as "the Brady Bill", was passed.by the U.S. Congress and signed into law by President Bill Clinton on November 30, 1993.

James Brady died on August 4, 2014 at the age of 73.  His death was ruled a homicide despite the fact that 33 years had passed since his shooting.

Columbine - On April 20, 1999, two senior students went on a shooting rampage at Columbine High School in Littleton, Colorado.  Eric Harris and Dylan Klebold murdered 12 students and one teacher. There were also a number of injuries before the disturbed teens committed suicide.

Virginia Tech - The "Virginia Tech Massacre" occurred on April 16, 2007, on the campus of Virginia Polytechnic Institute and State University in Blacksburg, Virginia.  In two separate attacks, a deranged gunman took the lives of 32 people.  The gunman, Seung-Hui Cho, 23, a student at the university, committed suicide.  He had a history of mental disorders.

Gabrielle "Gabby" Giffords - On January 8, 2011, Gabrielle D. Giffords, a member of the U.S. House of Representatives from Arizona, was a victim of a shooting near Tuscon.  The shooting occurred near a supermarket where Giffords meeting with her constituents.  The congresswoman survived, but was severely injured by a gunshot wound to the head.  Six people, however, were killed in the shooting.  Giffords resigned her congressional seat in order to focus on her recovery. In November of 2012, Jared Loughner, now 26, was sentenced to life in prison for the shooting. He was judged competent to stand trial after receiving treatment for mental illness.


SOME FOOD FOR THOUGHT

Canada's largest city, Toronto, has a population of 2.79 million (City of Toronto website).  Chicago, Illinois has a population of 2.718 million (July 1, 2014, U.S. Census bureau).  Although these two cities have roughly the same population, the number of homicides in each is very different.  Toronto recorded 57 homicides in 2014.  Chicago recorded 456 homicides in 2014. However, before we Canadians become too smug, we should be reminded that on June 4, 2014, a disturbed gunman named Justin Bourque killed three Mounties in Moncton, New Brunswick. Before we become too complacent, we should remember that we need to stand up for gun control in our own country too. Prime Minister Stephen Harper and his Conservative government are quietly and steadily relaxing gun control laws in Canada.  Harper and his Conservatives hope we won't notice. Don't let them get away with it!