Cheers! A toast to toasting

Here's mud in your eye!

Through the centuries, it has been a common practice for people of many cultures and backgrounds to toast to health, happiness, friendship and good fortune.  According to the International Handbook of Alcohol and Culture, toasting is "probably a secular vestige of ancient sacrificial libations in which sacred liquid was offered to the gods: blood or wine in exchange for a wish, a prayer summarized in the words 'long life!' or 'to your health!'"

The Oxford Dictionary states that the custom of drinking a toast can be traced back to the late 17th century.  It "originated in naming a lady whose health the company was requested to drink, the idea being that the lady's name flavoured the drink like the pieces of spiced toast that were formerly placed in drinks such as wine."

How did the practice of clinking glasses develop?  One story is that the touching of glasses originated in medieval times, when wine sometimes contained poison.  If a host wished to demonstrate that the wine wasn't spiked, he would pour part of the guest's wine into his own glass and drink it first.  If the guest trusted his host he would just clink glasses when the host volunteered to do this. Thus, according to legend, the clinking of glasses has become a manifestation of trust, honesty and a toast to good health.

Another story is that the clinking of glasses was believed to ward off evil spirits. 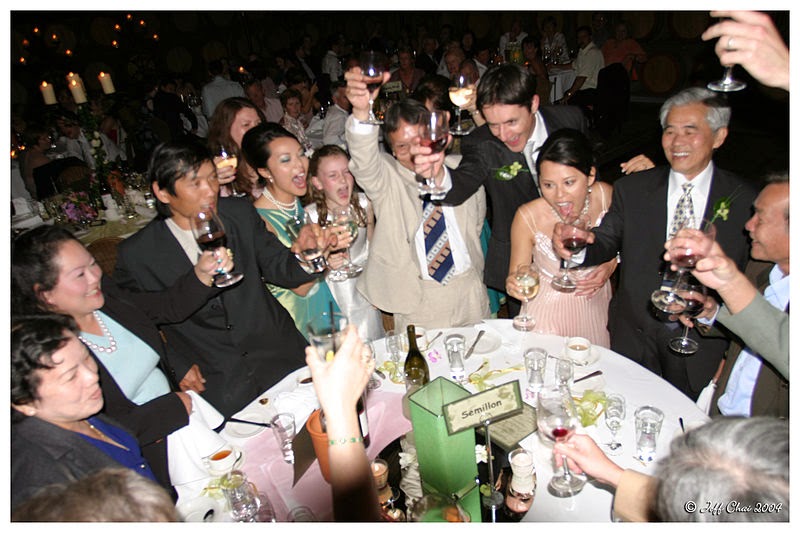 
There are a few theories concerning the origin of the jovial drinking toast "Here's mud in your eye!" One theory holds that it was used in saloons in the United States beginning in the late 1800s or that it was popular among English fox hunters and horse racing enthusiast even earlier than that.  Another is that it originated in the muddy trenches of World War I or in the cafes where British and American soldiers spent their leave.  A third theory is that it refers to the sediment often found at the bottom of a glass of wine.


May you live all the days of your life.

When it comes to blessings and toasts, it's difficult to top the Irish.  Here are some good Irish toasts:

Here's to health, peace and prosperity.  May the flower of love never be ripped by the frost of disappointment, nor shadow of grief fall among your family and friends.

May your home always be too small to hold all your fiends.

May I see you grey and combing your grandchildren's hair.

May you live to be 100 years, with one extra year to repent.


IRISH TOASTS TO FRIENDSHIPS AND FAMILY

May the hinges of our friendship never grow rusty.

May you have warm words on a cold evening, a full moon on a dark night, and a smooth road all the way to your door.

There are good ships,
And there are wood ships,
The ships that sail the sea.
But the best ships, are friendships,
And my they always be.


There is also apparently a very colourful Gaelic toast that goes as follows:

Fad saol agat, gob fliuch, agus bás in Eirinn,  -  Long life to you, a wet mouth and death in Ireland.

Jewish toasts and blessings are made using the ancient words of Hebrew and Yiddish.  The traditional Jewish drinking toast is "L'haim," which means "to life."  According to Rabbi Yirmiyahu Ullman in his "Ask the Rabbi" column for Ohr Somayach website, in the Jewish faith, wine represents "beauty, blessing and joy."  That is why, the rabbi explains, many Jews say "L'haim" only after blessing the wine properly and drinking a bit, so that the toast should be filled with the blessing of God's name and the "inherent joy and bounty of the wine."

The Chinese drinking toast is "Gambei!" which literally translates to "Dry the cup!"  It is similar in meaning to "Bottoms up!"  Serbs bestow upon each other wishes for a long life (ziveli), while the Spanish drink to health (salud), as do the French (santé), the Polish (na zdrowie), the Italians (salute) and many others.

When clinking glasses in sunny Italy, people say "cin cin." the Italian equivalent of "cheers." Accordng to Italian superstition, it is bad luck to cross over the arms of the people next to you during a toast.

"For one hundred years" is the traditional Italian toast for newlyweds in Italy.  Here are some others:

Amore e gelosia nacquero insiemo  -  Without jealousy, there is no love.

There is also a very chauvinistic Italian wedding toast:  Auguri e figli maschi!  -  Congratulations and may you have male children!

One of my all-time favourite toasts is  "Here's looking at you, kid.!"  Nobody can deliver those words as eloquently as Bogie did in the classic 1942 film Casablanca.  It is unquestionably the most romantic toast in the English language. 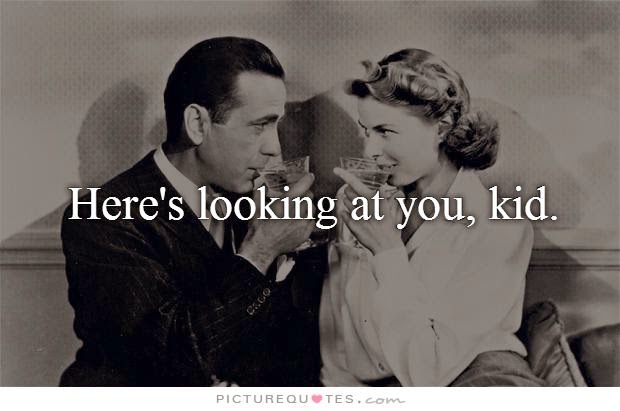 By the way, toasting can and should be inclusive.  No one need feel uncomfortable and excluded from fully participating in festivities and celebrations.  Everyone, including non-drinkers, can join in salutations to health, happiness and a good life.  Toasting glasses don't necessarily have to contain wine, beer, champagne or any alcoholic beverage at all,  and non-drinkers should be encouraged to toast with a libation of their choice.