Who is the real Laureen Harper, wife of Canada's Prime Minister? 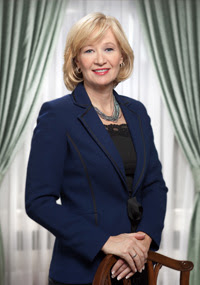 Stephen Harper has been Prime Minister of Canada since February 6, 2006.  Since that time, his wife Laureen has remained steadfastly out of the spotlight.  In many ways, she is similar to her two predecessors, the reluctant Sheila Martin and the very private Aline Chretien.  Canadians have never really gotten to know the spouse of their current prime minister.  U.S. First Lady Michelle Obama has a much higher profile and greater recognition in this country than Laureen Harper. The U.S. First Lady only has to change her hairstyle to create a buzz here and in the United States.

It is not really fair, however, to match the wife of the Canadian Prime Minister with America's First Lady.  Last month, when Mrs. Harper granted a rare sit-down interview at 24 Sussex Dr. to Kathryn Blaze Carlson of the Globe and Mail, she he made it very clear that she does not wish to be compared with Michelle Obama.  "She's the First Lady of the United States, and it's a defined role," she told Carlson.  "I'm the wife of the Prime Minister - there's no First Lady in Canada . . . {The Prime Minister's wife) can have a big role, a small role, whatever."

So far, Laureen has done exactly that.  She has defined her own role and has chosen to play it safe.  It is a carefully crafted role and it has been shrewdly executed.  This prime minister's wife has not stirred things up or rocked the boat.  Nor has she uttered anything that has been deemed extremely candid or remotely controversial - unless you count the 2008 incident in which she informed the National Arts Centre in Ottawa that she would be unable to fulfill her role as honorary gala chair.  This occurred the day after Stephen Harper remarked that events such as fundraising galas don't resonate with "ordinary people."

More worldly and well-travelled than her husband, Laureen Harper has displayed a fondness for motorcycle riding and a penchant for rescuing stray cats.  Prior to becoming the wife of Canada's 22nd Prime Minister, she worked hard to establish herself as both a talented graphic artist and a successful businesswoman.  She is also an active volunteer with such charitable causes as the CIBC Run for the Cure and the Ottawa Humane Society.  In September of 2006, she participated in a fundraiser for the CanWest Raise-a-Reader Day literacy program just after the Harper government had cut $17.7 million from the human resources department's Adult Learning and Literacy Skills Program.

Laureen will talk about her hobbies such as photography or gardening.  She'll discuss her favourite charities. Any deeper insights into her beliefs and her personality have not been revealed.  Canadian have no idea what makes her tick. Whatever free spirit she possesses, she keeps well under control - at least publicly.  The slightest sign of any Margaret Trudeau-like behaviour would be quickly suppressed by her husband and the Conservative Party.  It would never be countenanced.  Her role is to enhance and soften the rather stiff image of her husband. This she has performed with great aplomb.

Laureen Harper was born Laureen Ann Teskey on June 23, 1963 in Turner Valley, Alberta, a tiny rural town located south-west of Calgary.  The eldest of three siblings, she grew up on a ranch in the Rocky Mountain foothills surrounded by cattle, horses and numerous dogs and cats.  Her mother, Barbara was a housewife and her father, Dennis, was an electrician.  Being raised in such an environment, the youngster developed a deep affinity for animals.  Her parents sheltered many critters, preventing them from being destroyed.

With plans to become a journalist, Laureen attended the Southern Alberta Institute of Technology in Calgary.  She ended up switching to photography and discovered that she had an aptitude for computer-generated graphics.  After graduation, she embarked on a journey to Africa with a youth group and travelled through 13 countries.  During the six-month excursion, she became romantically involved with a young New Zealander named Neil Fenton.  Upon returning to Canada, the couple married in April of 1985.  Laureen found employment as a graphic artist with GTO printing and Fenton aspired to be a restaurateur. The marriage collapsed, however, and the two separated in 1988.

Neil Fenton is now the chairman of 10Duke, a computer software development company based in the United Kingdom and Finland.  He is the founder of the cutting-edge company which creates new applications for online technology,

After the breakup of her first marriage. Laureen became heavily involved in a new Western-based political party called the Reform Party of Canada, a right-wing movement founded by Preston Manning, son of long-time Alberta Premier, Ernest Manning.  It was at a Reform Party assembly in Saskatoon, Saskatchewan in 1990 that Laureen first became acquainted with Stephen Joseph Harper.

In 1991, as her relationship with Stephen Harper became more serious, Laureen completed the legal documents to finalize her divorce from Neil Fenton.   That same year, her parents also divorced after 29 years of wedlock.  According to a profile of Laureen Harper in Maclean's magazine (August 13, 2007) by Anne Kingston, religious differences contributed to the breakup of the marriage of Barbara and Dennis Teskey, causing their eldest child to take a dim view of organized religion.  She and Stephen Harper, an evangelical Christian, do not share the same religious beliefs.

In the federal election of October 25, 1993, Stephen Harper was elected to Parliament.  He represented the Reform Party as a member of the House of Commons for the riding for Calgary West.  Not long after, on December 11, 1993, he wed Laureen Teskey in a simple civil ceremony. They were married by a justice of the peace before a small group of family and friends in Calgary. Harper found an apartment in Ottawa while his new bride remained in Alberta to manage her graphic design and desktop publishing business.

In April of 1996, Laureen gave birth to the couple's first child, a son named Benjamin.  A second child, their daughter Rachel, followed in 1999.  The Harpers insist that they are an ordinary family and that they are typical parents.  Ben Harper, who celebrates his 17th birthday this month, is reported to be a strapping 6 ft. 3 in. tall and plays competitive volleyball.  Last January, the teenager's Twitter messages were locked when a reporter informed the Prime Minister's Office about it.  The reporter, Laura Stone of iPolitics.ca, stated that she told the PMO for "security reasons."   She said she "wanted to show what the account was like - it's a teenager's voice."

Laureen did not move to Ottawa until 2002, when her husband became Leader of the Official Opposition and the Harper family moved into Stornoway, the official residence in the Rockcliffe Park area of our nation's capital.  In 2006, she became the chatelaine of the Prime Ministers's residence at 24 Sussex Dr.  Until that time, she had been referred to as  "Laureen Teskey." In January of 2006, however, a Canadian Press dispatch proclaimed that henceforth she would be known as "Laureen Harper." in her capacity as the wife of the Prime Minister.

The Harpers share an interest in conservative politics and a fondness for cats. Stephen Harper, however, suffers from asthma and can not share his wife's love of the outdoors.  Laureen will turn 50 years old in June and she and the Prime Minister will celebrate their 20th wedding anniversary in December.  Reflecting on her impending milestone birthday, she told the Globe and Mail that she doesn't feel old.  She then added, "What's 50 supposed to feel like, anyway?"


EDITOR'S UPDATE (April 25, 2013) - On April 23, The Canadian Press reported that Laureen Harper had no advice on raising children in the public eye for new Liberal leader Justin Trudeau and his wife, Sophie.  In fact, she said she could probably take lessons from Sophie.  "I wouldn't give her any advice." Laureen was quoted as saying.  "She would walk down the street and people know her.  I walk down the street and nobody would know me."


EDITOR'S UPDATE (January 26, 2016) - Since I posted this article in 2013, I have noticed that many people have performed Google searches to determine whether Stephen Harper and his wife, Laureen, are separated or divorced.  Perhaps they have been trying to find out if there is any basis to rumours they have heard about the couple.  At any rate, I have seen many key word searches on the subject of the Harper union.

Although I cannot comment on the health of the Harper's 22-year marriage, I can say that Stephen and Laureen are not officially separated or divorced as of this writing.  It says a great deal about Canada that people would even have to do a Google check to find out if their prime minister (now former prime minister) is separated or divorced.  That certainly wouldn't be the case if an American president divorced or separated while in office.

Since the defeat of Stephen Harper's government in the October 19, 2015 election, Harper and his family have returned to Calgary, Alberta.  For the time being, the ex-PM remains a Member of Parliament for the riding of Calgary Heritage and commutes to Ottawa.