Richard III: Mystery solved - but was he that bad? 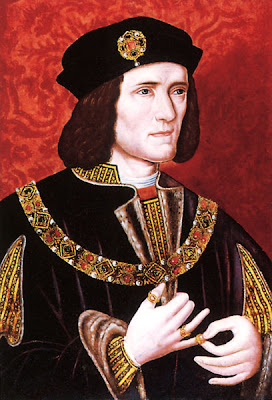 Researchers have confirmed 'beyond reasonable doubt" that a skeleton unearthed in Leicester, England is that of the 15th century English monarch, Richard III.  Born on October 2, 1452, Richard was 32 years old.when he was defeated by the forces of  Henry Tudor at the Battle of Bosworth Field on August 22, 1485.  He was the last English king to die in battle and the last of the Plantagenet kings.  His death brought an end to the War of the Roses, an internecine struggle between the Houses of York and Lancaster (the two branches of the Plantagenet dynasty).

Richard's skeleton was discovered last September on the first day of a 3-week excavation.  It was uncovered among the ruins of the choir of Greyfriars Church, beneath a social services parking lot.  According to historical records, the slain monarch was buried at the long-gone church.

Richard's skeletal remains were found in good condition, although severe trauma to the skull was evidenced and the feet were missing.  The skeleton also showed abnormal lateral curvature of the spine (Richard was known to be hunchbacked).  The hands were crossed and there was no sign of a coffin or burial shroud.

DNA samples from Canadian-born Michael Ibsen, a direct descendant of Richard's, sister, Anne of York, provided further evidence that the skeleton was indeed that of the king.  Michael, a 55-year-old furniture maker who lives in London, recently visited Bosworth Field.  He told The Guardian of London that it was a an uncanny experience.  "Standing in that field and thinking, 500 years ago Richard III died here,   "It very strange," he said, "and stranger still to think there's a tiny bit of my DNA , that was also in Richard."

Ibsen's mother, Joy, who died four years ago, was a British journalist who immigrated to Canada while in her 20s.  In 2005, historian John Ashdown Hill, contacted Joy and informed her that she was a 16th generation niece of Richard's eldest sister.  Joy was disbelieving, but finally agreed to provide a DNA sample.  After her  death, Michael moved to London.  The DNA sample was forgotten until Michael received a call concerning the archaeological excavation in Leicester.  As an ancestor of Richard III, he was asked to be present and to contribute a new sample of DNA.  Ibsen was most happy to comply with the request.

History and literature have not been kind to Richard III whom Shakespeare immortalized in his famous play, The Bard paints a very unflattering portrait of Richard his his oft-quoted historical drams, believed to have been written over a century after the ill-fated monarch's death.  He portrays Richard as a Machiavellian ogre; but was the king really a ruthless tyrant or was he merely the target of Tudor propaganda?  Is it a case of the old cliche that history is written by the victors or was Richard guilty of being a tyrant?  Perhaps it is a combination of both.

During his brief reign, King Richard introduced some important liberal reforms such as the right to bail.  He thought it was unjust  for offenders of minor crimes to be denied their liberty before trial.  In addition, he legislated that English law must be written in English rather than in Latin or Old French. He also relaxed restrictions on books and printing presses and standardized the system of weights and measures.

Yet Richard's accomplishments are overshadowed by one huge blemish on his record, namely the alleged murder of his nephews, the  "princes in the tower."  The princes were Edward V of England and his younger brother Richard of Shrewsbury, Duke of York, the only sons of King Edward 1V.  When Edward IV died unexpectedly in 1483, he left his two boys, aged nine and 12, to the care of his brother, Richard Duke of Gloucester, who would later become King Richard III.  Upon his brother's death, Richard was appointed Lord Protector of England, the de facto ruler of the realm.

The two boys were placed in the Tower of London by their uncle, ostensibly to protect them from plots against them and to prepare young Edward for his coronation as king.  The brothers, however, mysteriously disappeared and it was assumed that they were murdered.  When their uncle ascended to the throne, many believed that he was responsible for the murder of  the boys, although the evidence was circumstantial.

Once he had defeated Richard at Bosworth Field, Henry Tudor, who assumed the throne as King Henry VII, accused his deceased adversary of  the "shedding of infants' blood."  In 1502, a courtier named Sir James Tyrrell, allegedly confessed the murder of the two princes.  Some claimed that Tyrrell hired agents to perform the dirty deed for him.  None of this, of course, has been proven.  Nor has there been any concrete evidence that Richard III ordered the murder of his nephews, although he is far from exonerated from any link to that heinous crime.  It is unlikely that it will ever be  known who really killed the princes.

Note: the above portrait, entitled The Two Princes Edward and Richard in the Tower, 1483, is the work of English artist John Everett Millais, 1878.

In keeping with archaeological custom, the remains of Richard III will be reinterred at Leicester Cathedral, the nearest consecrated ground.


EDITOR'S UPDATE: September 6, 2013 - It seems that Richard III was infected with large parasitic worms.  Researchers who unearthed the reviled monarch's skeleton beneath a parking lot in central England last year discovered a large number of roundworm eggs in the soil near his pelvis.  In a study published online in the prestigious British medical journal Lancet on September 4, 2013, experts concluded that the eggs came from an infection that the king had had during his life since there were no eggs near the king's skull and only tiny amounts in the soil close to his grave.