I prefer to think of myself as open-minded and amenable to change. There are limits and boundaries to my broadmindedness, however, especially with regard to classical literary characters.  For example, I am greatly disturbed by the CBS television series Elementary in which English actor Jonny Lee Miller portrays Sherlock Holmes as a recovering drug addict in New York City.  His sidekick, Watson, is a woman named Dr. Joan (rather than John) Watson, played by New York-born actress Lucy Liu.

Elementary is actually an American version of the BBC's Sherlock in which Benedict Cumberbatch and Martin Freeman play Holmes and Watson in a contemporary British setting.  It was originally commissioned as a 13-part series.  Its ratings have been high.  In fact, it proved so popular with television audiences that CBS decided to extend it to a 22-episode season.  The show is being broadcast on the Sky Living channel in the United Kingdom.

There is little doubt that Elementary is enjoying great popularity and success.  I'm not arguing that the series does not have any merit.  Neither am I suggesting that does not deserve to be watched. I'm just opposed to its use of the names of the famous sleuth and his loyal assistant.  Sherlock Holmes and Dr. John Watson, as conceived by Sir Arthur Conan Doyle, are British to the core.  It is part of their very essence.  If you take away their London setting, you might as well be talking about another story.  I would have no objections to a series about a New York-based detective who solves crimes with the help of a female assistant - just don't call  the detective Sherlock Holmes. 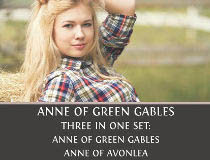 A new cover for a box set of Anne of Green Gables novels portrays Anne Shirley as blond and buxom.  Say it isn't so!  Folks, this is literary sacrilege!  It's certainly not the red-haired, freckle-faced, rail-thin Anne created by author L.M. Montgomery.  Montgomery must be turning over in her grave to see what has been done to her creation.  Here's what Beth Cavert of the Lucy Maud Montgomery Society told CBC's As it Happens radio program:  "There isn't one element of that picture - from the arm position, to the hair, to the face, to the shirt, to the body - that says Anne of Green Gables in any way."

Montgomery's classic 1908 novel has been in the public domain since 1993.  Therefore, it can be published by anyone without the approval of the original copyright holder.  The new edition was released in November as part of Amazon's CreateSpace self-publishing agency.  I can't help but wonder if the publisher of this new edition of Anne novels has actually read the stories?  Has this U.S. publisher even heard of Prince Edward Island?   Anne is just 11-years old, for goodness sake. when the series begins and her red hair and pigtails play an integral role in the plot?  I'm scratching my head.  What next?  Will someone relocate Anne of Green Gables to New York or California or Paris or Tokyo (She has plenty of Japanese fans).

As you can tell, I'm not in favour of radically changing classical fictional characters.  At some point, very little remains of the author's creation and the author's vision.  Anne of Green Gables is as woven into the fabric of Prince Edward Island as Sherlock Holmes is to the foggy streets of London or Huckleberry Finn to the Mississippi River.  Can you imagine good old Huck on the Thames or the Tiber or the Ganges?  Ooops!  I'd better not give anyone the idea.  I wouldn't want Mark Twain to be turning over in his grave too.

Editor's Note (February 17, 2013)  The image of the blond Anne of Green Gables has been removed from Amazon's website.