The Assassination Attempt on Theodore Roosevelt 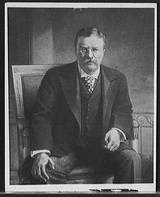 Just over a century ago, on October 14, 1912, an assassination attempt was made on Theodore Roosevelt, the 26th President of the United States.  The incident took place in Milwaukee, Wisconsin. It happened during during one of the most contentious presidential election campaigns in American history.

The 1912 contest was a rare four-candidate race. Woodrow Wilson was the Democratic Party's nominee while union leader Eugene V. Debs was the candidate of the Socialist Party of America. The Republican Party found itself split between William Howard Taft, the incumbent president, who represented its conservative wing, and former president Roosevelt who led the more the progressive faction . Teddy Roosevelt and his supporters eventually launched a new party, the Progressive Party (nicknamed the Bull Moose Party) and Roosevelt was nominated as its presidential candidate.

During his 1912 campaign for the presidency, Roosevelt was shot at close range by 36-year-old John Flammang Schrank, a psychotic New York saloon-keeper.  An alert bystander, Adam Bittner, noticed the gun, (a 38 caliber pistol) as it was aimed at Roosevelt's head.  Bittner interfered with Schrank's arm.just as he pulled the trigger. The gun went off and hit Roosevelt in the chest, knocking him down.  The crowd tackled Schrank and beat him severely.  Roosevelt managed to rise up and exhort the mob to cease its attack.  Police officers ran into the crowd, apprehended Schrank, arrested him and brought him to the central police station, Milwaukee.  His bail was set at $15,000.

On that cool evening in Milwaukee, Teddy Roosevelt came within a whisker of losing his life.  He survived because he had a manuscript of a lengthy 50-page speech in his coat pocket, folded in two, which slowed the bullet.  The myopic Roosevelt also carried a steel spectacle case in his pocket, and the bullet traversed this too. It entered his chest near the right nipple and lodged in the chest wall.


Theodore Roosevelt did not consider himself seriously enough injured to warrant immediate medical attention because his breathing had remained normal..  He insisted on giving his prepared speech although he was clearly bleeding.  In fact, he even worked the shooting into the speech by displaying his blood-soaked shirt and the bullet-hole in his manuscript to the audience. He joked that it would take "more than that to kill a Bull Moose."

After his 90-minute speech, Roosevelt was taken to a Milwaukee hospital where he was examined and  his wounds were dressed. He reluctantly permitted surgeons to inject him with tetanus anti-toxin. The ex-president was then taken on a special train to Mercy Hospital in Chicago where he remained for eight days of observation.

Theodore Roosevelt was discharged from the Chicago hospital on October 23, 1912, shortly before the November 5th election.  He finished second to Woodrow Wilson, but received more votes than the serving president, Republican William Howard Taft.  The bullet was never removed from Roosevelt's body and caused no problems after the wound healed.

As for John Schrank, he never went on trial for the attempted murder of Theodore Roosevelt.  A panel of doctors determined that he was insane.  In 1914, he was sentenced to the Central State Mental Hospital in Waupun, Wisconsin where he spent the remaining 29 years of his life.

Let's delve deeper into the troubled life of John Schrank, Theodore Roosevelt's would-be assassin. Schrank was born in Erding, Bavaria, (now Germany) on March 5, 1876 and immigrated to the United States with his parents in 1889 when he was 12 years old.  The family settled in New York's Lower East Side.  Schramk's father soon died of consumption at the age of 38 and the boy was left in the care of his aunt and his uncle, a New York tavern owner and landlord.  John eventually supported himself by working in his uncle's tavern.

Schrank was heartbroken when his girlfriend, Emily Ziegler, died in the General Slocum disaster on June 15, 1904.  The PS General Slocum was a passenger steamboat that operated in the New York City area.  The steamer caught fire and sank in the East River while on a chartered run carrying members of St. Mark's Evangelical Church - German Americans from Manhattan- on their way to a church picnic.  It is estimated that over 1,000 of the 1,342 passenger aboard lost their lives.  Schrank was supposed to have accompanied Emily on that doomed excursion but had been unable to get anyone to take his shift at the family tavern.  Instead, he found himself identifying the charred remains of his girlfriend's body at the morgue.

For John Schrank, there was still more heartache to come.  Beginning in 1910, his beloved aunt and uncle died within a year of each other and he greatly mourned their deaths. They had raised him and he considered himself to be their adopted son.  The distraught young man quickly sold off the lucrative properties he had inherited and just drifted aimlessly, ending up in a dilapidated hotel above a saloon at 156 Canal Street in New York.  During those years, Schrank wrote poetry and became well-versed in his knowledge of the Bible.

In his hotel room, John Schrank displayed the portraits of four American presidents - Abraham Lincoln. Ulysses S. Grant, James A. Garfield and Theodore Roosevelt - and he reportedly gazed at the them for long periods of time while drinking beer.  He apparently told acquaintances that he admired all four men.  He had been aware of Theodore Roosevelt since the ex-president had served as  New York's police commissioner in 1895.and he was an admirer of Roosevelt's presidency.

Despite his high regard for Teddy Roosevelt, John Schrank could not countenance the idea of Roosevelt starting a third party and seeking a third term as president.  In Schrank's twisted mind, Roosevelt's actions were a threat to America and he feared that they could lead to civil war. According to the Smithsonian, he told police that "I looked upon his plan to start a third party as a danger to the country, my knowledge of history, gained through much reading, convinced me that Colonel Roosevelt was engaged in a dangerous undertaking."

The mentally unbalanced Schrank also claimed that the ghost of former president William McKinley (who was assassinated in Buffalo in 1901 by an anarchist named Leon Czolgosz) had appeared to him in a dream accusing Teddy Roosevelt of being his real murderer.  McKinley's ghost, according to Schrank, had strongly urged him to avenge his death.

Determined to kill Theodore Roosevelt, Schrank purchased a revolver and packed up some belongings.  He began waiting stalking the former president, waiting  for the opportune moment to kill him.  On September 21st, he left New York City by train and made several trips through the south.  He followed Roosevelt from city to city before heading north to the midwest.  Roosevelt kept changing his travel plans during the campaign, making it difficult for Schrank to carry out his mission. Schrank, however, hesitated to perform the deed when he was in close range of  Roosevelt in Chattanooga, Tennessee and at the Hotel La Salle in Chicago.

Roosevelt arrived in Milwaukee by train at about 6:00 p.m. the next day.  John Schrank went to the Hotel Gilpatrick where the ex-president was dining with his campaign strategists. Teddy was scheduled to deliver a speech at the Milwaukee Auditorium later that evening..  He had just finished his supper and was leaving his hotel to go to his car when Schrank shot him as he stood waving to cheering onlookers.

Interestingly enough, when Teddy Roosevelt passed away in 1919, John Schrank remarked that Roosevelt was a great American and that he was sorry to learn of his death.  Schrank himself died of bronchial pneumonia on September 16, 1943.  He was 67 years old.