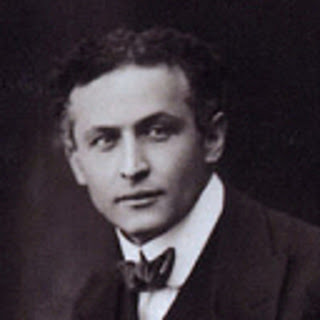 No prison can hold me; no hand or leg irons or steel locks can shackle me.  No ropes or chains can keep me from my freedom.

On this day, 104 years ago, the legendary escape artist Harry Houdini performed one of his most amazing stunts.  It happened on August 26, 1907 at San Francisco's Aquatic Park.  With his hands handcuffed behind his back and with over 75 pounds of ball and chain locked to his body, the great illusionist plunged into San Francisco Bay.  He escaped from his shackles in 57 seconds.

The following words about Houdini appeared in the San Francisco Examiner on August 26, 1907.  They were written by Ashton Stevens.

Everybody will tell you how he does the trick, but no two bodies will tell you the same way.  He is as mysterious as salad, and yet, apparently, as ingenious as a detective.

* Harry Houdini died on Halloween.  He passed away on October 31, 1926 in Detroit, Michigan.  His appendix had burst and he died from peritonitis, an inflammations of the appendix.

*  Houdini claimed to have been born in Appleton, Wisconsin.  He was actually born in Budapest, Hungary and immigrated to the United States as a child.

*  Houdini was Jewish, the son of Rabbi Mayer Weisz.

*  When the United States entered World War I in 1917, Houdini tried to enlist in the army but was rejected because he was 43 years old.

﻿﻿
﻿﻿
*  Houdini was diminutive.  Most biographers estimate his height to have been only 5 ft. 5 inches.

THE NINETEENTH AMENDMENT TO THE CONSTITUTION OF THE UNITED STATES

Congress shall have power to enforce this article by appropriate legislation. 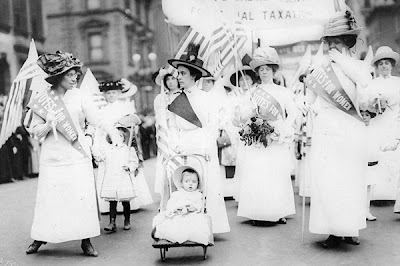 American women fought long and hard for the right to vote.  So did Canadian women.  Here in Canada, women were given the right to vote in federal elections when An Act to confer the Electoral Franchise upon Women was made law by the Canadian Parliament on May 24, 1918.  The law came into effect on January 1, 1919.

In the U.S., the House of Representatives passed the Nineteenth Amendment on May 21, 1919.  Two weeks later, the Senate followed suit.  Tennessee became the 36th state to ratify the amendment on August 18, 1919, signifying the agreement of 3/4 of the states.  It became official when Secretary of State Bainbridge Colby certified the ratification on August 26, 1920 - exactly 91 years ago.

U.S. President Barack Obama declared August 26 "Women's Equality Day" in a proclamation issued by the White House yesterday.  In his declaration, Obama said, "I call upon the people of the United States to celebrate the achievements of women and recommit ourselves to the goal of gender equality in this country."  Obama said the Nineteenth Amendment "tore down the last formal barrier to women's enfranchisement in our Nation and empowered America's women to have their voices heard in the halls of power."

According to a statement by U.S. Secretary of Labor, Hilda Solis, women now represent one in four state legislators, 17 members of the 100-member U.S. Senate, three of the nine justices on the American Supreme Court, 74 generals in the armed forces and 7 cabinet positions in the Obama Administration.