Here's to the Irish on Saint Patrick's Day 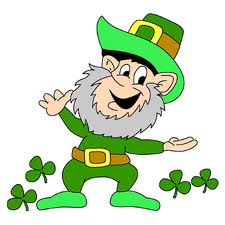 When Irish eyes are smiling,

In the lilt of Irish laughter

You can hear the angels sing.

When Irish hearts are happy,

All the world seems bright and gay.

And when Irish eyes are smiling,

Sure, they steal your heart away.

- The lyrics to When Irish Eyes are Smiling were written by Chauncey Olcott and George Graff, Jr. and set to the music of Enerst Ball for Ocott’s production of The Isle O’ Dreams.  The music was published in 1912.
A Happy St. Patrick’s Day to one and all! Everyone is Irish on this day. I’m no Maureen O’Hara and I don’t have a drop of Irish blood in me, but today I can share in the spirit of the Irish.

On St. Paddy’s Day, Number 16 presents some amusing and thought-provoking quotes about Ireland and the Irish.

In Ireland the inevitable never happens and the unexpected constantly occurs.


Ireland is the old sow that eats her farrow.


English, Scotchmen, Jews, do well in Ireland – Irishmen never; even the patriot has to leave Ireland to get a hearing.


I could wish that the English kept history in mind more, that the Irish kept it in mind less.


The moment the very name of Ireland is mentioned, the English seem to bid adieu to common feeling, common prudence, and common sense, and to act with the barbarity of tyrants, and the fatuity of idiots.


* For an island with a small population, Ireland has produced a number of the world's most acclaimed writers and poets.  Among them are William Butler Yeats, George Bernard Shaw, Oscar Wilde, Thomas Moore and the great James Joyce.  It has also produced great actors of the stage such as Siobhan McKenna and Peter O'Toole.

On the feast day of  St. Patrick, the great patron saint of Ireland, I leave you with an Irish blessing.

May the road rise to meet you,

May the wind be always at your back,

May the sun shine warm upon your face,

The rains fall soft upon your fields and,

Until we meet again,

May God hold you in the palm of His hand.