The trouble with Prince Harry 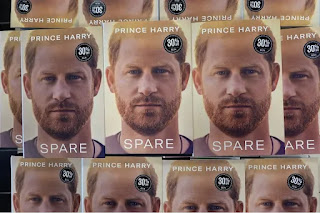 Maybe "Mexit" was never about Meghan Markle, Maybe it was always driven by Prince Harry, who, in his American wife, found the much-needed catalyst to leave a family where he could never outrun the feeling of being second-best. The spare as opposed to the heir.

The title of Prince Harry's tell-all memoir says it all.  There's a reason Harry titled his book Spare.  He's never really gotten over feeling that  he's been cheated in life, that he was destined to always be runner-up to his older brother, William. This may seem contradictory because Harry seems to be relieved that he is not faced with the responsibility of being the future king.  He would much rather leave the royal protocol to William.  Still, it appears that the Duke of Sussex is wrestling with notion that he has always been regarded as less important than his big brother.  This goes far deeper than mere sibling rivalry.  It is a profoundly painful.

Harry, 38, claims to be content with his life in California.  However, Judi James, a body language expert, says otherwise.  James, a prominent non-verbal correspondence instructor in the U.K., suggests that the image on the cover of Harry's book suggests that he is still hurting.  "This is not a fun, smiling, playful man, and it's not Harry the family man either, hugging his adoring wife and children to show how it looks to be saved by that power of love," she told the Daily Express, a British tabloid.  If Harry now has the life he has always wanted, why does he still seem so unsettled and so conflicted?  Why does he still feel the need to lash out at his family?

I've wondered about Harry's motives, his mindset.  His motives are probably complex and varied.  One thing for certain, the book is clearly aimed at his family.  He feels that he and Meghan have been slighted.  But  is it purely revenge?  Christopher Andersen, a royal expert, thinks Harry is trying to get a rise out of  family members.  "I think he's trying to get a rise out of somebody," Andersen told US Weekly.  But as we approach the coronation, I think all (King) Charles wants is calm . . .(which is), I think, making (Harry) very frustrated that he's not getting any kind of response."

In some ways, I sympathize with Harry.  Despite immense wealth and privilege, it isn't easy to be a member of the royal family, also known as The Firm.  Harry was only 12 when his mother, Diana, Princess of Wales, died in a car crash in Paris, after being chased by the paparazzi.  That must have been very traumatic for him, and he is obviously still grieving her.  I can also understand why he is upset by the racism that has been directed at Meghan, who is biracial.  Some have judged Meghan very harshly,.  They are far more severe with her than with her sister-in-law, the Princess of Wales, which is indeed reprehensible.  Having said all that, I think Harry has gone way too far.  He's crossed the line.

Harry wants to have it both ways.  He complains about how horribly the British press has treated him and Meghan  Understandably he is wary of the media, after what happened to his mother.  Yet, at the same time, he and Meghan have sat down for an interview with Oprah Winfrey.  They have  appeared in their own Netflix series.  Harry written a tell-all book and promoted it on talk shows in Britain and the United States.

How can Harry insist that he wants to protect his privacy and at the same time bare his soul to the world?  He accuses his step-mother Camilla, Queen Consort, and others of leaking private conversations and other information to the media.  That is a weak justification for disclosing the most intimate details of his life and his relationship with his family.  Meanwhile, the media are having a field day with each "bombshell" revelation and Harry's book is flying off the shelves.

I don't think it's a matter of money.  I doubt that the Duke of Sussex wrote this book purely for mercenary considerations.  Besides, Harry has other ways of enhancing his already considerable wealth.  I just find him so contradictory.  On the one hand, he claims to want to mend fences with his family.  Yet, he chose to write a book that strongly attacks them and paints them in an unflatteringly light.  Does he really expect to reconcile with them that way?  He had to know what he was doing.  The book wouldn't have been published if it didn't contain a certain amount of "dirt."

Like it or not, and Harry claims not to like it, the British monarchy is more than just a family.  It is undeniably an institution.  Harry's actions have done considerable damage to that institution.  Americans may regard members of the royal family as mere celebrities, especially if they appear on talk shows.  The British see it differently.  They are far more aware of the constitutional and historical background of the monarchy.  That is why Harry and Meghan's popularity has plummeted in the U.K.

Prince Harry will likely regret having written this book, and he believes that he had to tell his story and what he perceives as his truth.  Patti Reagan, daughter of former U.S. president Ronald Reagan, also wrote a tell-all book about her family.  She has come to regret it.

It's time now for Harry to stop complaining.  Many have it much worse and our suffering considerably from the effects of the pandemic, the war in Ukraine, and the ravages of inflation.  Harry would be well-advised to lay low for a long while, to stay in the shadows, Unfortunately, the stench from his actions will last for a long time.  He has opened a Pandora's Box.