Meditations at Home During the Pandemic #8 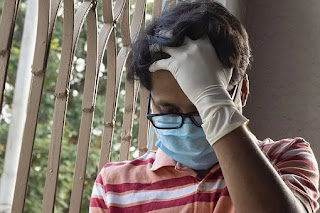 This is the eighth in a series of reflections while I am at home during the COVID-19 pandemic.

Hello to readers from around the world.  Greetings and well wishes from Toronto, Canada.  I haven't written my COVID meditations for a while, but I want you to know that I am well and safe.  I hope you are, too.  I have some exciting news to share with you.  During this pandemic, I have taken the time to  self-publish a novel.  It's called Children of Dieppe and it will be available in ebook form soon.  I will provide you with more details on Number 16 as soon as possible.

Here in Canada, COVID cases have really spiked since school opened and autumn began.  People are sacrificing a great deal.  In Ontario, the government has started to reinstate some restrictions.  Another full lockdown could be imminent.  We have entered the most difficult phase of this pandemic.  Winter is coming and the days are getting shorter.  It will become colder and darker.  The sadness and the suffering is horrifying.  Yet, we will get through this.  We have to.  A vaccine is on the way and that will help, but I 'd advise everyone to listen to reputable doctors and scientists before considering a vaccination.  Above all, I advise my American friends not to listen to Donald Trump and his quacks.  Don't be fooled by Trump's blathering and his lies.  Please wear a mask and social distance.

I will definitely get vaccinated, but not until Canadian health authorities and my family doctor tell me it's safe to do so.  When a reliable vaccine becomes available, there will be decisions about how it will be distributed and who gets it first.  That will all be worked out in due time.  The important thing is that there will be a vaccine.  It's interesting to note that Prime Minister Kyriakos Mitsotakis of Greece has announced that all Greeks will be provided with coronavirus vaccines at no cost, as soon as the vaccine is made available, most likely in the first half of 2021.

As much as I welcome a vaccine, I realize that it is not a panacea.  COVID-19 will not magically disappear from the face of the earth within days.  Eradicating this terrible scourge on humanity will take time and great patience.  Still, a vaccine is imminent and it will be a major step forward.

Another shaft of light for me during this bleak COVID era has been the defeat of Trump in the U.S. presidential election.  There was dancing in the streets, as if a dictator had been overthrown.  Most of America's European allies are thrilled that the United States will be working closely alongside them again.  Under Joe Biden, the U.S. will rejoin the Paris environmental agreement.  Once again, there will be an American leader who cares about climate change and fair immigration policies.  Joe Biden has promised to reinstate DACA, which allows the children of undocumented immigrants to remain in the U.S.  It may take time to reverse Trump's immigration policies, but Biden will be judged on how well he keeps his promises.  Furthermore, under the Biden administration, U.S.  Americans with pre-existing conditions will not lose their health insurance.  Yes, America is back!

Although I continue to rejoice at Biden's victory, some sobering thoughts remain.  Over 70 million people in the United States voted for Donald Trump.  It is mind-boggling that so many Americans could vote for such a man, despite the fact that he has allowed COVID-19 to spread like wildfire in the U.S.  Although Trump lhas ost the election, his cult-like followers are still out there.

As expected, Donald Trump has been ungracious in defeat.  He has refused to concede and he probably never will.  He just can't admit that the election was fair and that he lost.  There is no evidence of a rigged election or any kind of widespread voter fraud.  Trump lost 306-232  in the Electoral College and 5,400,000 votes (and counting).  Those, my friends, are the facts.  Trump and his Republican lackeys continue to waste money on frivolous lawsuits that will not overturn the result of the election.  The American people have spoken and they have chosen Joseph R. Biden, Jr. to be their next president.

Beginning on January 20, 2021, Joe Biden will have a huge mess to clean up.  Biden wants to be a president of all American, including those who didn't vote for him.  He seeks to united a very divided country.  It will be a daunting task, but Joe has the opportunity to change history.  I do not exaggerate when I say that he has a date with destiny.

Trump began his first foreign trip with a visit to Saudi Arabia, that great bastion of freedom and democracy, the country responsible for the abominable killing of Washington Post columnist Jamal Khashoggi.  I hope Joe Biden's first presidential trip will be to Canada, where U.S. presidents have traditionally visited first.

Canadians celebrated Thanksgiving back in in October.  However, American Thanksgiving and Christmas are just around the corner.  Unfortunately, those two holidays will cause the virus to spread at an even greater rate in the United States.  Due to this horrible pandemic, many people around the globe, including myself, will not be able to celebrate the great feast of Christmas the way we would really like to.  We won't be able to have large family gatherings or attend Christmas concerts.  We'll just have to celebrate the best way we can under these circumstances.

Take care and stay safe.  I wish you all the best and I will keep you posted about by novel.