The language of Donald Trump

'When I use a word,’ Humpty Dumpty said in rather a scornful tone, ‘it means just what I choose it to mean — neither more nor less.’

’The question is,’ said Alice, ‘whether you can make words mean so many different things.’


’The question is,’ said Humpty Dumpty, ‘which is to be master — that’s all.” 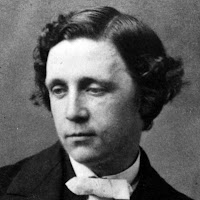 - Lewis Carroll (1832-1898), English writer of fiction
From Through the Looking-Glass, and What Alice Found There


In Chapter 6 of Lewis Carroll's Looking Glass, the sequel to Alice's Adventure's in Wonderland, Alice meets Humpty Dumpty, the nursery rhyme egg.  In the course of their conversation, Humpty expresses his philosophy about words and language.  He boldly declares that when he uses a word, it means just what he chooses it to mean.

U.S. President Donald Trump's espouses the same philosophy as Humpty Dumpty in Looking Glass.
Trump is a master at using language to mislead and misinform.  He endlessly repeats words and slogans until his supporters are so completely brain-washed that they repeat his chants in a cult-like fashion.  How many times have we heard "witch-hunt" and "treason" and "no collusion?"  It's brain-numbing, exhausting and extremely annoying.

In its historical sense, a witch-hunt is a hunt for and subsequent persecution of persons accused of being witches, as in 17th century Salem, Massachusetts.  In a more informal sense, it is a campaign against a person or group holding unorthodox or unpopular opinions.  Since this is not the 17th century, and no one is accusing the president and his followers of being witches, Trump must be referring to the more informal meaning of the term "witch-hunt."  However, Trump and his followers are free to express their opinions as much as they want in a democratic country.  They are protected by the First Amendment to the U.S. Constitution, guaranteeing freedom of speech.  The press regular reports on his rantings and he tweets to his heart's content.

The truth is that what Donald Trump calls "witch-hunts" are the legitimate and necessary investigations into his criminal behaviour and activities.  Special Investigator Robert Mueller, in his report on Russian interference in the 2016 U.S. presidential election, found evidence that Trump obstructed justice.  That is a crime.  Trump is now facing impeachment because he has admitted to calling a foreign leader (Ukrainian President Volodmyr Zelensky) and asking him to dig up dirt on a political opponent - Joe Biden, and Biden's son, Hunter.  According to a whistleblower, the call was made as part of a campaign by Trump and his administration to pressure Ukraine into investigating the Bidens.

Alexander Vindman, a decorated U.S, Army officer and top White House Ukraine expert, told congressional investigators that Trump was blocking $400 million in security aid to Ukraine.to force that country to publicly announce an investigation into Biden and his son.  That is against the law.

Now, let's look at the word "treason."  The Merriam-Webster dictionary defines treason as "the offense of attempting overt acts to overthrow the government of the state to which the offender owes allegiance or to kill or personally injure the sovereign or the sovereign's family"  It is a very serious offence, but President Trump justs throw around the word.  It's as if anyone who criticizes him or is disloyal to him is guilty of treason.  Treason involves disloyalty to the state or an attempt to overthrow the state.  Donald Trump is not the state.  He is not America.

Donald Trump has broken the  law, and contrary to what Trump believes, an American president is NOT above the law.  That is why the process of impeachment is enshrined in the Constitution of the United States.  A president must be accountable for "high crimes and misdemeanors.'  In addition, Trump and the White House have continually attempted to stonewall investigations by withholding information and ignoring congressional subpoenas.

Humpty Dumpty's theory of language, echoed by Donald Trump, is very dangerous to society and to democracy.  If words can mean anything, then words mean nothing.  They lose their meaning.  A drastic loss of communication ensues.  It can become downright Orwellian as in Nineteen Eighty-Four's "Newspeak."  Therein lies the path to authoritarianism or totalitarianism.

Below is an image of Donald Trump as King Louis XIV of France, known as the "Sun King."  Louis famously stated "L'etat c'est moi." ("I am the state.). 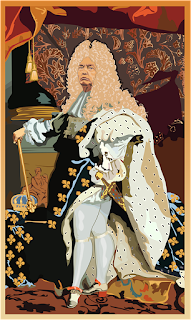