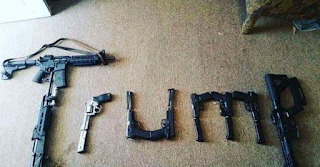 Here's how President Donald Trump has responded to recent questions about gun control:

"So, Congress is working on that. They have bipartisan committees working on background checks and various other things. And we'll see. I don't want people to forget that this is a mental health problem. I don't want them to forget that, because it is. It's a mental health problem. And as I say -- and I said the other night in New Hampshire; we had an incredible evening -- I said: It's the people that pull the trigger. It's not the gun that pulls the trigger."

"I'm also very, very concerned with the Second Amendment, more so than most Presidents would be. People don't realize we have very strong background checks right now."


Does that sound like a president who is going to get serious about gun control?  Does that sound like a man who is going to stop all the gun violence and mass shooting in the United States? Just days after a mass shooting at a garlic Festival in Gilroy, California,, a 21-year-old white supremacist opened fire at a Walmart store in El Paso, Texas.  The El Paso massacre left 20 dead and 20 injured.  Hours later, it happened again, another mass shooting at a bar in Dayton, Ohio.

President Donald Trump's response to this gun violence and shedding of innocent blood is woefully inadequate.  It is especially galling since Trump has been stoking the flames of white nationalism.  He is also a strong supporter of the National Rifle Association (NRA).

The president's reaction to mass shootings is always the same.  He offers his support and prayers to the grieving families.  However, he and his Republican lackeys will never do what really needs to be done in order to protect innocent lives.  They won't do it because they need the support of the NRA and right-wing conservatives to win re-election in 2020.  Trump and the Republicans have to save their political skins, which seems to be more important to them than protecting Americans from gun violence.

This can't go on.  It is a scourge and it has to stop.  Most Americans know it.  Still, Trump and his cohorts refuse to address the problem.  They refuse to do what must be done.  Assault weapons and high-capacity magazines have no place on the streets of America or on any city streets.  They should be banned PERIOD.

Trump stated that the U.S. already has strong background checks now.  If so, why are there so many incidents of gun violence?  Why are so many weapons falling into the hands of mentally ill people and white supremacists?  Why are so many Americans, young and old alike, rich and poor alike, living in fear of mass shootings?

Donald Trump has blamed video games and mental health for the shootings.  Yet, he refuses to take any measures to prevent guns from getting into the hands of people who are mentally unstable.  He and the Republican-controlled Senate refuse to back legislation allowing stringent background checks.  Of course, Trump will never acknowledge his own complicity in the mass shootings, nor will the Republicans, nor will the NRA.  They just keep on repeating the specious argument that "guns don't kill people" ad nauseum.  Yes, people pull the trigger, but people also allow guns to be sold to the mentally ill and to  militant white supremacists.  More guns always equals more gun violence.  That's why countries with stricter gun laws have fewer shootings.  People who have to keep guns out of the wrong hands.  Guns can't do that.

75% favour a voluntary buyback program in which the government would purchase firearms from current owners.

62% of Americans favour a ban on the sale of semi-automatic weapons.  (Why isn't that number higher?)

Only 25% favour the banning of handguns and 46% of Americans say someone in their household owns a gun.

For comparison, here a recent poll on gun control and gun ownership in Canada.  According to an Angus Reid poll (released May 24, 2019), found the following.:

* Half of Canadians (50%) consider gun violence a serious problem for the country, while half say political and media coverage of this has been overblown.

* 75% of Canadians would support a complete ban on assault weapons.

* 61% wanted to see a complete ban on handguns in Canada (support for the ban is considerably higher in rural areas than urban areas).

* Two-thirds of Canadians (65%) said they would support a tax
funded buy-back program for gun owners if the government banned handguns, assault weapons or both.