Biggest Movie Star Missteps: Bill Murray could have starred as The Santa Clause and Arnie in Die Hard

Hey movie fans, here is a series of infographics about actors who have turned down iconic roles in some of the most popular films.. They provide you with some background on why the various actors turned down the role and how it affected their careers and the price they paid financially.  I hope you find them entertaining and enjoyable.

This series of infographics for Betway Casino  https://blog.betway.com/casino/the-biggest-movie-star-missteps/  reveal the costliest decisions ever made by some of Hollywood's most famous film stars when it came to turning down iconic roles.

SEAN CONNERY
DID
N’T UNDERSTAND LORD OF THE RINGS
Looking back on the Lord of the Rings trilogy, it’s hard to imagine anyone else but Ian
McKellen donning the h
at and robes of Gandalf. However, early in production, the role was
offered to the original James Bond, Sean Connery. Unfortunately for him, he couldn’t get his
head around the script and passed up one of the most beloved franchises in film history.
This
led to him taking a role in The League of Extraordinary Gentlemen, which was pegged
to be the start of its own franchise. We all know how that went
–
while it made a decent
amount of money worldwide, it was critically panned and is widely credited as the r
eason
Connery decided to quit acting altogether. 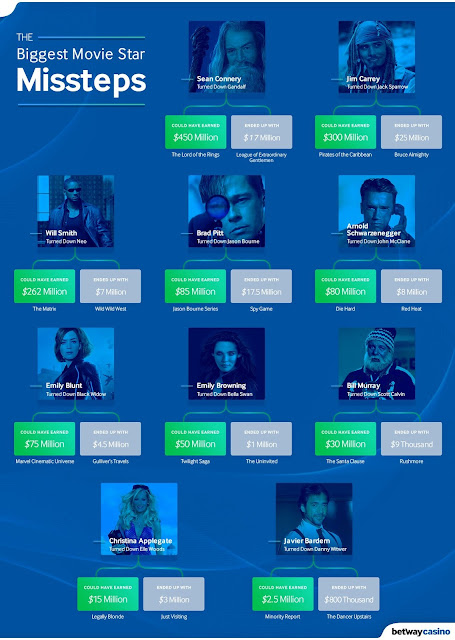 BRAD PITT
BACKED THE WRONG SPY
In a classic case of backing the wrong horse (or spy in this case) Brad Pitt turned down the
opportunity to become Jason Bourne for the chance to star opposite Robert Redford in
2001’s Spy Game. While
the latter was well received, it
’
s barely even on the radar when
compared to the value of the Bourne franchise.
The physicality and intensity that Pitt brings to roles made him a no
-
brainer to play the ex
-
CIA assassin. However, despite early misgivings fr
om action fans, Matt Damon stepped up
to deliver the visceral action that the series is now famous for. While Pitt isn’t exactly
struggling for work
–
the payout from the Bourne series would certainly have made him a lot
more comfortable. 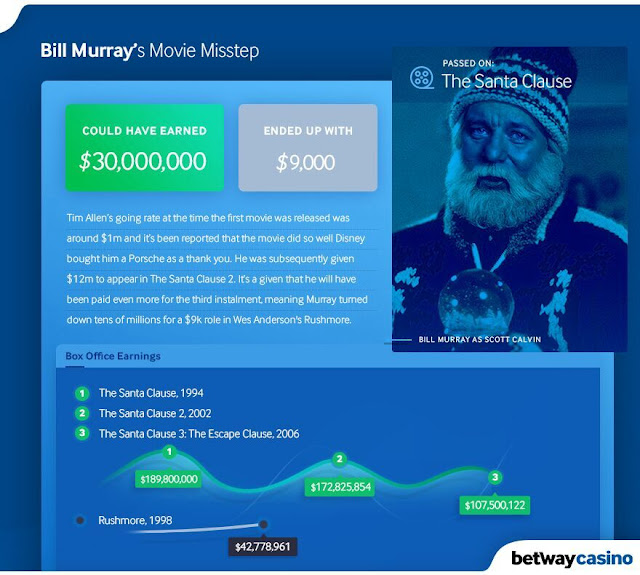 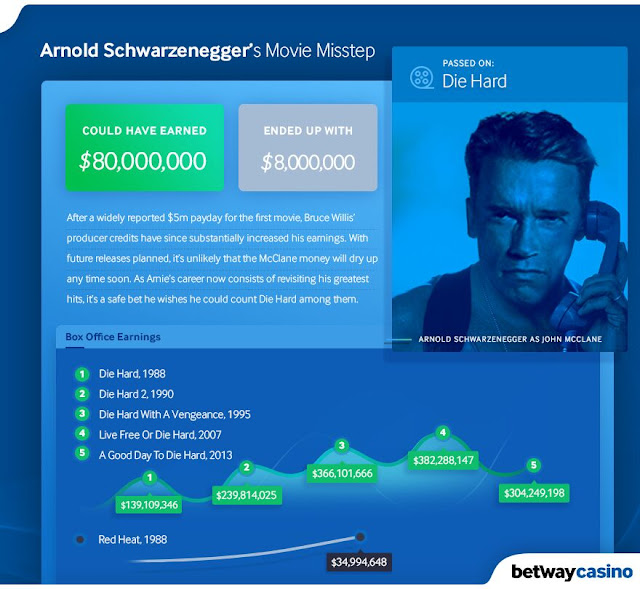 In a classic case of backing the wrong horse, (or spy in this case), Brad Pitt turned down the opportunity to become Jason Bourne for the chance to star opposite Robert Redford in 2001's Spy Game.  While the latter was well-received, it's barely even on the radar when compared to the Bourne franchise.

The physicality and intensity that Pitt brings to roles made him a no-brainer to play the ex-CIA assassin.  However, despite early misgivings from action fans, Matt Damon stepped up to deliver the visceral action that the series is now famous for - the payout from the Bourne series wold certainly have made him a lot more comfortable. 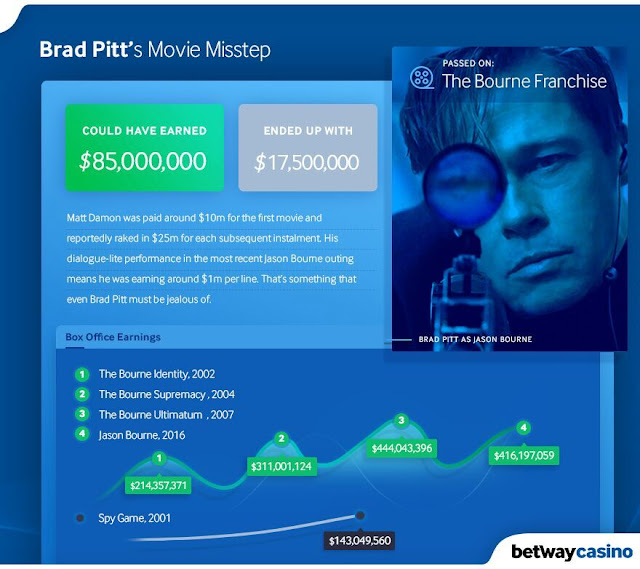 Legally Blonde was a career-maker for Reese Witherspoon, but it also represents a terrible misstep for Applegate, who was the original casting choice.  Afraid of being typecast as a ditsy blonde stereotype, she turned the movie down in favour of time-travelling comedy Just Visiting.  The fact that you're unlikely to have heard of the latter, which ended up being a financial disaster to the tune of $19m in losses, should give you an idea of the magnitude of the error.  Applegate herself has admitted that it was a "stupid decision" and looking at the amount of money she passed by, we'd be inclined to agree. 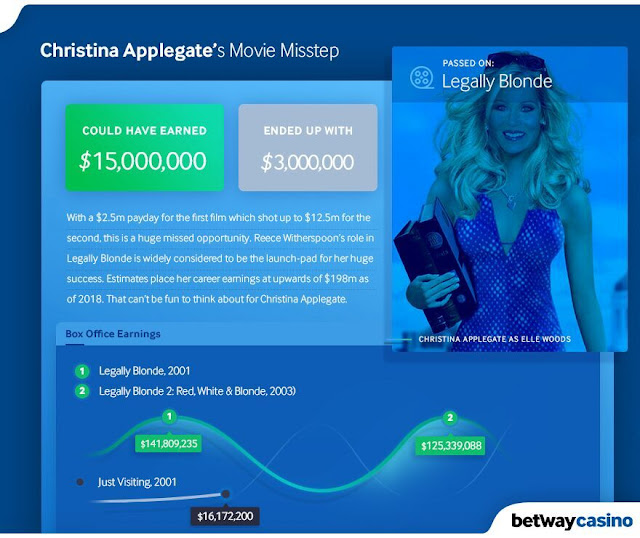 Emily Blunt's decision not to appear in Marvel's Cinematic Universe as one of the central characters must keep her up at night.  Certainly, the role of Natasha "Black Widow" Romanoff had led to Scarlett Johansson frequently appearing on lists of top-paid actors instead.  The fact that Blunt's decision was due to scheduling conflicts with Jack Black's updated version of Gulliver's Travels makes the whole thing even more galling.  While her voyage to Lilliput performed reasonably well at the box office, it was critically savaged and isn't a drop in the ocean compared to the payday Johansson continues to enjoy to this day. 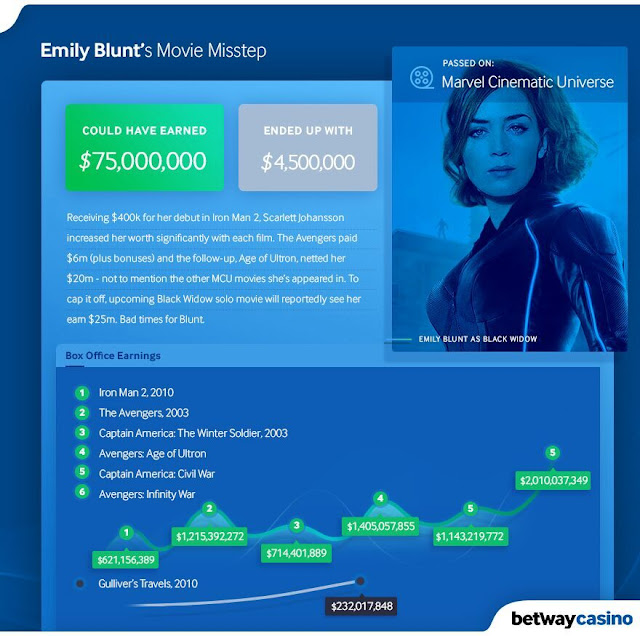 Twilight author Stephanie Meyer had Browning in mind when casting for the movie trilogy began. However, the young Australian actor had just finished a project and wasn't ready to jump into a franchise that she thought would jeopardise her studies, leaving the door open for Kristen Stewart to swoop in and land her big break alongside a sparkly Robert Pattinson.  The next role Browining took on was in the 2009 movie The Uninvited, a remake of a Korean horror movie that didn't receive the best reception and also didn't bring in a fraction of the amount as the Twilight saga.  While she has been working regularly ever since, she must wonder, 'What if . . . ?' 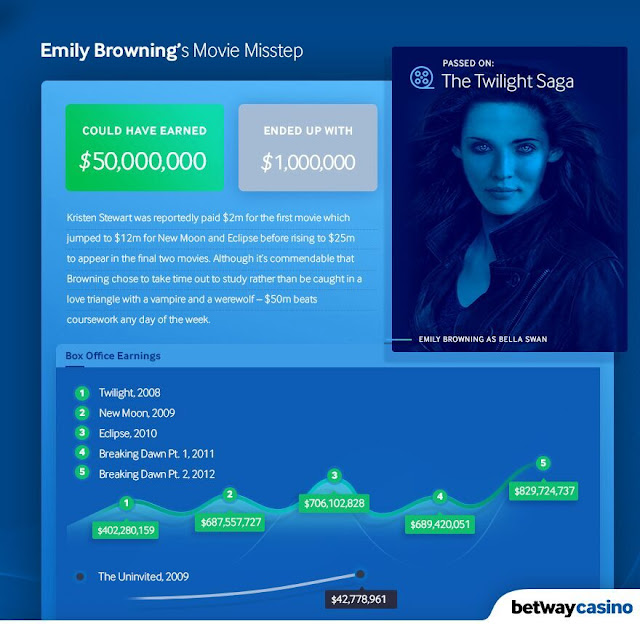 Not many people would say no to Steven Spielberg, but Bardem did just that when he was offered a large role in the 2002 sci-fi epic, Minority Report.  He claims this was due to him being uncomfortable with an English-speaking role, which would have been a linguistic challenge for him at the time.  But that would make more sense if the film he chose instead, Johm Malkovich's The Dancer Upstairs, was in his native Spanish, but it wasn't.  Maybe it's more a case of him being picky with parts than wary with words.  This led to Colin Farrell being fast-tracked to Hollywood stardom while Bardem, who had already been nominated for a Best Actor Oscar at the time, spent the next few years in smaller features before his stunning performance in No Country For Old Men made him a household name.  While it could be argued that Bardem took the more principled route, the truth is that the movie he went for instead didn't make much more at the worldwide box office than Farrell was paid to chase Tom Cruise around for a couple of hours. 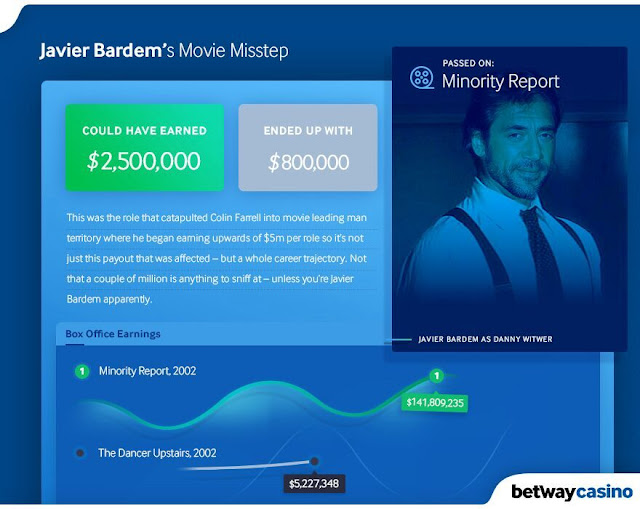 When people think of Disney's Pirates of the Caribbean series the first thing that comes to mind is, inevitably, Johnny Depp's rum-swilling, Keith Richards impersonation Captain Jack Sparrow.  However, we might have seen a more outrageous portrayal if the first choice had said"Alrighty-then".

Jim Carry turned down the opportunity to step aboard the sea-faring franchise to focus on his upcoming project, Bruce Almighty.  While it is considered one of his better mid-career comedies, his time playing God cost him the opportunity to rake in hundreds of millions from the House of Mouse. 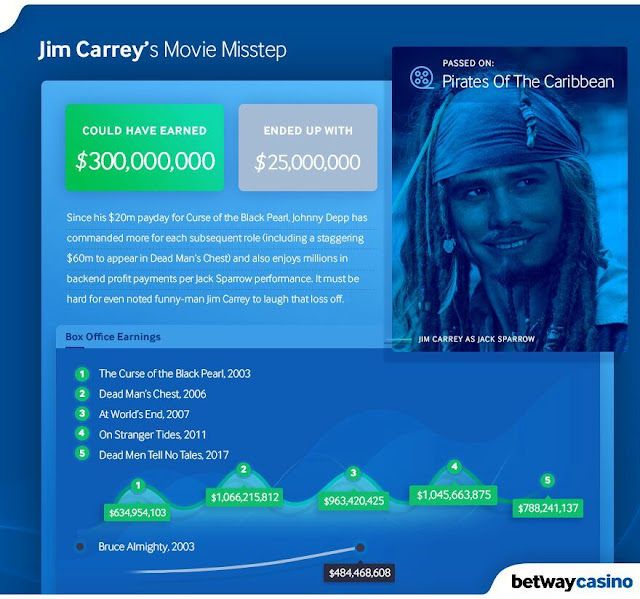 Looking back on the Lord of the Rings trilogy, it's hard to imagine anyone else but Ian McKellen donning the hat and robes of Gandalf.  However, early in production, the role was offered to the original James Bond, Sean Connery.  Unfortunately for him, he couldn't get his head around the script and passed up one of the most beloved franchises in film history.

This lead to him taking a role in The League of Extraordinary Gentlemen, which was pegged to be the start of its own franchise.  We all know where that went - while it made a decent amount of money worldwide, it was critically panned and is widely credited as the reason Connery decided to quit acting altogether. 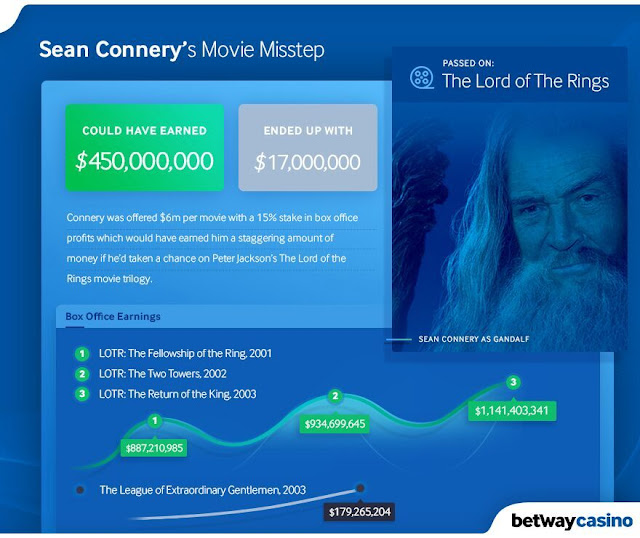 WILL SMITH TOOK THE BLUE PILL

Most people would jump at the chance to appear in a ground-breaking trilogy of movies that pushed the boundaries of storytelling, special effects and action sequences.  Particularly if the other option was light-hearted steampunk western.  But not Smith.  Despite being the favourite to lead the cast of The Matrix, he took a gamble and said no, riding into s sunset of shame with Wild Wild West.  He has since claimed that Keanu Reeves did a better job in the role of Neo than he could have at the time, but it's still hard to image he doesn't regret turning down the opportunity to kick ass and take names in a leather trench coat.  Especially when he made less than a quarter of the money for his choice to portray a cringeworthy cowboy. 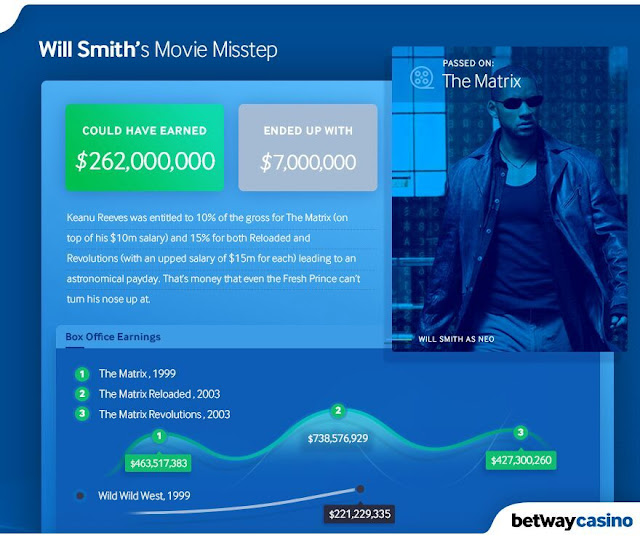