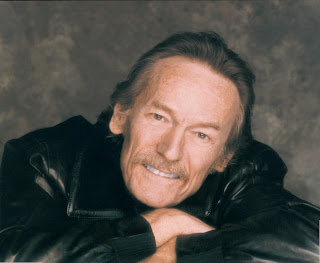 His name is synonymous with timeless songs about trains and shipwreck, rivers and highways, lovers and lonliness.  His music defind the folk-pop sound of the 1960s and '70s.

- From Lightfoot, a biography by Nicholas Jennings

A Canadian music legend turned 80 years old today.  He was born Gordon Meredith Lightfoot Jr. on November 17, 1938 in Orillia, Ontario.  He is well-known internationally as a great folk-rock and country singer and he is arguably Canada's most outstanding songwriter.  His music career has covered more than five decades.  His songs have been recorded by such acclaimed artists as Bob Dylan, Neil Young, Johnny Cash, Elvis Presley. Glen Campbell, Eric Clapton, Peter, Paul and Mary, Anne Murray, Herb Alpert, Barbra Streisand and John Mellencamp.

In the March 14, 1974 edition of Rolling Stone, Lightfoot's singing was described by Stephen Holden as "almost crooning - a style which understates and redeems the rhetorical and sentimental conventions intrinsic to formal songwriting."

The lyrics to Lightfoot's "Canadian Railroad Trilogy," send shivers down my spine.  The song is a chronicle of the construction of the railway across Canada in the 1880s.  It was commissioned by the Canadian Broadcasting Corporation (CBC) for a television special entitled 100 Years Young,  The show was broadcast on January 1, 1967 to mark Canada's centennial year.  Over fifty years later, on July 1, 2017, Lightfoot performed the same song at Canada's 150th birthday celebrations on Parliament Hill in Ottawa.

On September 8, 2002, Gordon Lightfoot suffered a serious abdominal hemorrhage.  Thankfully, after a long stay in a hospital in Hamilton, Ontario, he recovered.  Gord is a survivor and he's very resilient.  On September 14, 2006, he suffered a minor stroke during a performance and lost the use of two fingers on his right hand.  For a short time, he used a substitute guitarist for the more complicated guitar work.  Bu 2017, however, he had regained full use of his right hand.

As you can tell, I am a big fan of the man.  Aside from his music, another reason I like Gordon Lightfoot is that is a staunch Toronto Maple Leafs fan.  He was selected celebrity captain of the Leafs for the National Hockey League's 75 anniversary season in 1991-1992.

Yesterday evening, Lightfoot performed a birthday concert in his hometown, at the Orillia Opera House.  According to the Orillia Sun, the "full-house audience broke into Happy Birthday" before he could even say hello.  "Welcome to my birthday party," Gord proclaimed.

Today, on his 80th birthday, Lightfoot performed at the National Arts Centre in Ottawa.  It was his 80th show of 2018.  He informed Joe Warmington of the Toronto Sun that he has no plans to retire and that he plans to go out on tour again in the spring.  "I started doing this in 1965," he told Warmington with a laugh.  "I feel blessed to be still doing it (but) it is true I almost didn't make to 80 it a few times."

* In 1970, Gordon Lightfoot was appointed an Officer of the Order of Canada.  He became a Companion of the Order in 2003.

* In 2010, Lightfoot was the victim of a hoax when a journalist reported on social media that he had died.