Who's right about climate change - Stephen Harper or Barack Obama? 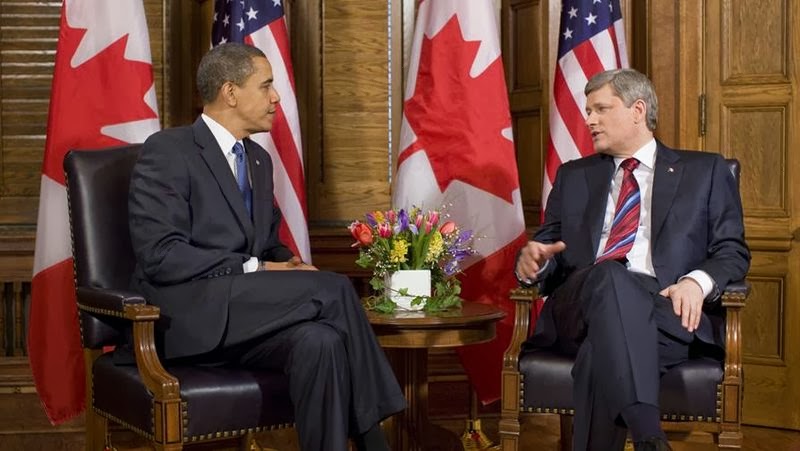 U.S. President Barack Obama has just put forth a plan that cuts carbon pollution from existing power plants in the United States by 30 per cent by 2030. In an email from Organizing for Action, a grassroots organization that advocates for the president's agenda , Obama made the following statement:

Climate change is happening, and it's happening now. As a president and as a father, I feel a moral responsibility to do something about it. The world our children grow up in depends on what we do today.

Carbon pollution is threatening our health right now. Over half of all Americans already live in areas where air pollution too often makes it unhealthy to breathe - it's time to cut carbon pollution the same way we already regulate toxic chemicals in our air.

I'm not going to wait to take action on this.

Right now, big polluters are going to do everything they can to derail this momentum.  They've been fighting these EPA (U.S. Environmental Protection Agency) standards since before they were even announced.

The EPA's plan would impose new regulations on existing coal-fired electricity plant beginning in 2020, allowing the United States to leap ahead of Canada in achieving its greenhouse gas emissions targets for that year.

While Obama is trying to take action, Prime Minister Harper's record on the environment is absolutely disgraceful and utterly abysmal.  I will not mince words.  I think Canadians deserve better. Harper's Conservative government should be voted out of office for many reasons and its attitude toward climate change is a major one. President Barack Obama differs with our prime minister on the issue. Harper continues to push for the Keystone XL pipeline, while Obama chooses to questions it.  Stephen Harper continues to sully both Canada's reputation and its environment.

In December of 2011, the Harper government pulled Canada from the Kyoto climate agreement requiring major industrial countries to reduce their annual carbon dioxide emissions to below 1990 levels.  This is a fact of which the majority of Canadians don't seem to be aware.  The results of a 2013 survey sponsored by the Ottawa-based think tank, Canada 2020 and the University of Montreal, showed that 59 per cent of Canadians did not realize that Canada has been the only country to withdraw from the legally-binding international accord.  When questioned as to whether Canada remained a part of the Kyota Protocol, 41 per cent responded "no." However, 33 per cent responded "yes" and 26 per cent were unsure.

At the time, Canada's then-Environment Minister, Peter Kent, claimed that withdrawing from the accord would spare the government an estimated $14 billion in penalties for not achieving its Kyoto targets.. Never mind that Kyoto is the world's only binding climate treaty.  Never mind that the dollar figure was disputed. As the New Deomocratic Party's environment critic, Megan Leslie, put it, withdrawing from Kyoto saved the Conservatives from having to admit that Canada had fallen short of it Kyoto goals, like "the kid in school who knows they're going to fail the class, so we have to drop it before that actually happens."

In 2012, the Canadian Environmental Assessment Act was repealed and replaced by a weaker version.  A 2013 report by Environment Canada found that the federal government won't even come close to achieving its international commitment to cut greenhouse gas emissions by 17 per cent below 2005 levels by 2020.

The Harper government has steadily removed environmental safeguards and has shown little regard for science.  Here are some glaring examples.  In March of 2012, Environment Canada declared the jobs of 60 scientists and other researchers to be surplus.  They were given their walking papers.  Funding for climate research has been reduced and the government has closed institutions such as the Roundtable on the Environment and the Economy.  Due to budget cuts, the Natural Sciences and Engineering Research Council was forced to end grants to numerous organizations doing research in northern Canada on climate change and other scientific areas in biology, hydrology, and zoology.

The government has also allegedly attempted to muzzle scientists through federal policies that restrict what they can disclose publicly about their research.  Last year, the Federal Information Commissioner, Susan Legault, agreed to investigate a complaint from the Environmental Law Centre at the University of Victoria and Democracy Watch, an ethics advocacy organization.  Legault received a detailed report, Muzzling Civil Servants: A Threat to Democracy, that provided examples of how accesses to taxpayer-funded science has been suppressed by government restrictions on scientists speaking to the media and the public.

On February 19, 2014, President Obama, Prime Minister Harper and Mexican president Enrique Peña Nieto met in Toluca, Mexico for the annual North American Leaders' Summit.  At the "Three Amigos" Summit, Obama declared that "severe weather patterns" have "consequences for our businesses, for our jobs, for our families, for safety and security."  He warned that climate change "has the potential of displacing people in ways that we cannot currently fully anticipate and will be extraordinarily costly."

President Obama also made the following remarks about the Keystone XL pipeline: "I said previously that how Keystone impacted greenhouse gas emissions would affect our decision.  But frankly, it has to affect all of our decisions at this stage because the science is irrefutable."  The American president reminded the other leaders that we only have one planet: and that we do have to influence big greenhouse gas emitters such as China and India.

Obama also stressed that although he wishes to stimulate economic development, such growth must be weighed against moving away from the use of fossil fuels.  Not surprisingly, Stephen Harper strongly promoted the development of the Alberta oilsands.  He argued that the most recent U.S. State Department report gave the oilsands a favourable review with regard to environmental impact.

On March 31, 2014, the United Nations's intergovernmental panel on climate change (IPCC) released a voluminous report warning that climate change is already threatening life on the planet - from melting ice in the Arctic to heat waves, heavy rains and natural disasters.  Food stocks and human security are in dire jeopardy.  Rajendra Pachauri, chair of the IPCC, stated that "Nobody on this planet is going to be untouched by the impacts of climate change."

Last month, a landmark U.S. report, declared that climate change is a clear and present danger. The National Climate Assessment, the collaborative work of 300 prominent scientists and experts, concluded that the effects of climate change are now being felt.  According to the report, this is no longer a faraway threat and its impact will be felt by every American.

In the face of mounting evidence, climate change deniers, especially right-wing conservatives, continue their denial.  They stubbornly refuse to acknowledge the sobering scientific evidence before them.  Like the Emperor Nero, they fiddle while Rome burns.  Only this time it isn't just Rome that's burning.  It's the planet Earth.