Jackie Robinson's season in Montreal and the film 42 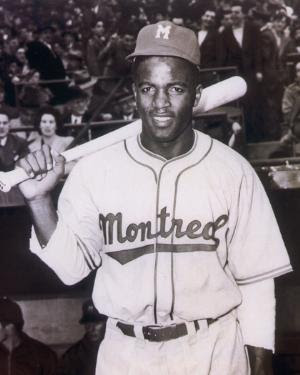 Had it not been for the fans in Montreal, I doubt seriously we could have made the grade so rapidly.  The fans there were just fantastic and my wife and I have nothing but the greatest memories.


Back in 1946, the great Jackie Robinson spent a season with the old Montreal Royals of the International League. The Royals played at Delorimier Stadium and they were the Triple-A affiliate for the fabled Brooklyn Dodgers.  In the 2013 biographical film 42, Robinson, as portrayed by Chadwick Boseman, is shown wearing a Montreal Royal's uniform at spring training in Florida.  42's director, Brian Helgeland, however, did not film any part of the movie on location in Montreal.

This is not surprising for several reasons.  Filming in Montreal would have increased production costs and non-Canadian audiences wouldn't have much interest in it.  Montreal Gazette columnist Bill Brownstein offered another plausible reason in his review of 42.  "The only explanation for this oversight," he wrote,  "apart from budgetary concerns, could be precisely due to the manner in which Montrealers so accepted him - as opposed to the treatment he received in the U.S. - and thus there wasn't sufficient conflict here.  And conflict, of course, is the engine that drives drama."

Jackie Robinson's time in Montreal is just a sidelight to 42's portrayal of his bittersweet first season with the Brooklyn Dodgers.  Yet, if Robinson hadn't spent a season north of the border, he probably wouldn't have been prepared to become the first black to break the colour barrier in major league baseball.

Although the Montreal Royals folded in 1960, they will always be remembered for launching the careers of Robinson and other baseball luminaries such as Tommy Lasorda, George "Sparky" Anderson and Roberto Clemente.  The city of Montreal was eventually awarded a Major League Baseball franchise, the now-defunct Montreal Expos.  The Expos joined the National League in 1969, becoming the first MLB team based outside of the United States.  In 2004, MLB moved the Expos to Washington, D.C. and they  were renamed the Washington Nationals.

Jackie Robinson passed away on October 24, 1972 at the age of 53.  He died at his home in Stamford, Connecticut from a heart attack and complications from diabetes.  Just prior to his death, he was interviewed by Bill Mann, who was a baseball writer for the Montreal Gazette at the time.  Jackie, who had aged prematurely, was then working as a CBC commentator at Jarry Park, the original home of the Expos.  The diabetic Hall of Famer was grey-haired, visually impaired and walked with a cane.  Mann spoke to him in the press box.   Reflecting on that interview in an article last month for USA Today, Mann wrote, “Robinson looked much older than his 53 years, and he didn’t want to talk about baseball.  He wanted to talk about his year in Montreal as a young man.”

“I experienced no racism here,” Robinson told Mann.. “None. That was a huge relief for my wife and I.  The French-Canadian people welcomed us with open arms.  I’ve always had warm feelings for this city. I knew I’d come back some day if the opportunity arose.”

Jackie's widow, Rachel Robinson, is now 90 years old.  She runs the Jackie Robinson Foundation which is based in the SoHo district of Lower Manhattan.  The foundation, established by Rachel in 1973,  provides scholarships and educational support services to minority university students.

Born Rachel Annetta Isum in Los Angeles, California on July 19, 1922, Rachel is a former nurse. She married Jackie Robinson on February 10, 1946 at the Independent Church in Los Angeles.and they had three children: Jackie Robinson, Jr. (born November 18, 1946), Sharon Robinson (born January 13, 1950) and David Robinson (born May 14, 1952).  Jackie Jr. died in a car accident on June 17, 1971, less than a year before his father's passing.  Only 24 at the time of his death, Jackie Jr. had fought in Vietnam and overcome drug addiction.  Sharon, now 63, became a midwife, educator and a director of educational programming for Major League Baseball.   She is also an author who has written books about her father including Promises to Keep: How Jackie Robinson Changed America (2004), Testing the Ice: A True Story about Jackie Robinson (2009 with Kadir Nelson) and Jackie's Gift: A True Story of Christmas, Hanukkah, and Jackie Robinson (2010).  The youngest son, David, now 61, has ten children and is a coffee grower in Tanzania.


While in Montreal, Jackie and Rachel Robinson lived in an apartment duplex at 8232 de Gaspé Ave. in the city’s Villeray area. Jackie earned about $600 a month with the Royals.  He played both shortstop and second base and he  guided his team to victory in  the International League championship.  Robinson was chosen the league MVP that season.  His batting average was a robust .349 and he recorded three home runs, 66 RBIs and 40 stolen bases in 124 games.

Jackie hit .400 in the five-game championship (Little World Series) against the Louisville Colonels. After the deciding game, a 2-0 victory for the Royals, the jubilant crowd lifted Robinson onto their shoulders and sang "Il a gagne ses epaulettes!"  ("He has earned his stripes!").  Sam Malton who was covering the story for the Pittsburgh Courier was amazed at the strength of goodwill toward Jackie.  He wrote that it was "probably the only day in history that a black man ran from a white mob with love instead of lynching on its mind."

Rachel Robinson was pregnant with the couple's first child during her husband's season with the Montreal Royals (Jackie Robinson Jr. was born in Los Angeles after the Royals' season had ended).  World War II had just ended and food was still being rationed.  Few in the Robinson's Montreal neighbourhood spoke English and Jackie and Rachel didn't speak French.  Yet, Montrealers reached out to the African-Americans.  Local women gave Rachel their food ration coupons and helped her sew maternity wear.  Children assisted her in carrying her groceries home.

According to Rachel, when her pregnancy began to show, "Everyone around us started watching out for me, I would usually sit outside on our porch during the day, and the neighbours would come by and ask me how I was doing, or if I needed anything. If a day went by when I didn’t go out on the porch, somebody would come by and knock on the door to make sure I was okay."  To thank the neighbours, Rachel left a fruit bowl  on a table on the porch so that they could help themselves to a snack.

In 1987, Rachel wrote an editorial in the New York Times to commemorate the 40th anniversary of Jackie's historic first game with the Brooklyn Dodgers on April 15, 1947.  Remembering the ugly racism that she and her husband had experienced while at spring training in Flordia, she noted:

We left the South bruised, stimulated, and more contemplative than we arrived.  A more resilient pair.  Our totally opposite experience in Montreal later that year provided us with an excellent springboard into the majors … Montreal and then Brooklyn became special havens where we gradually regained our sense of ourselves and our dignity.

On February 28, 2011, to coincide with Black History Month, officials from Canada and the United States unveiled a plaque at the Montreal apartment building where Jackie and Rachel resided in 1946.  The gold plaque, printed in both English and French, was placed at the front door of the duplex.  Although Rachel Robinson was unable to attend the ceremony, she sent a letter that was read by Lee McClenny, the U.S. consul-general in Montreal.  The letter stated:

In the end, Montreal was the perfect place for Jack to get his start.  We never had a threatening or unpleasant experience there; the people were so welcoming and saw Jack as a player and more importantly as a man. 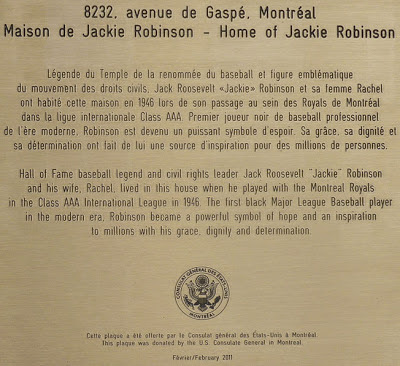 Rachel Robinson has seen 42 and she is pleased with the film.  In an April 7, 2013 article in the New York Daily News ('Rachel Robinson feels relieved and excited after watching Jackie Robinson biopic ‘42'), she is quoted as saying, “You never know how something’s going to turn out. We waited so long to have this film done. It is so important to me, and to our family and to our foundation and to everybody who cares about Jack, that I wasn’t sure what they could do with the period they had chosen.  But I think they did a marvellous job with that period. As soon as I sat down and watched it, I was relieved. And excited.”

If you are interested in reading further about Jackie and Rachel Robinson's time in Montreal, Jack Jedwab, executive director of the Association for Canadian Studies (ACS), has written a 1996 book entitled Jackie Robinson’s Unforgettable Season of Baseball in Montreal.  Jewab believes that Branch Rickey, president and general manager of the Brooklyn Dodgers during the 1940s, intentionally chose Montreal when he signed Jackie Robinson because he wanted to send Robinson to a place where race was not a dominant issue.  According to Jewab, " "Race was not a powerful dimension of inter-group conflict in Montreal, or anywhere in Canada,. Language and religion have always been greater sources of tension here. Branch Rickey felt that the United States was not ready to accept a black baseball player, but in Canada, the fact that he (Robinson) was black would not be perceived as a problem. So it seems as if it was a very calculated move for Robinson to make the breakthrough with Montreal. And it turned out to be a very good calculation."