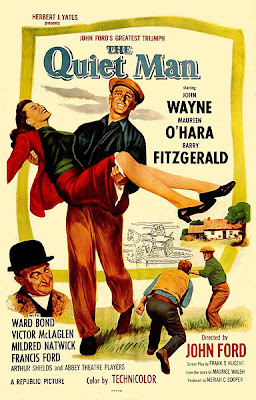 I have often said that The Quiet Man is my personal favourite of all the pictures I have made.  It is the one I am most proud of, and I tend to be very protective of it. I loved Mary Kate Danaher. I loved the hell and fire in her. As I readied to begin playing her, I believed that my most important scene in the picture was when Mary Kate is in the field herding the sheep and Sean Thornton sees her for the very first time. It's a moment captured in time, and it's love at first sight. I felt very strongly that if the audience believed it was love at first sight, then we would have lightning in a bottle. But if they didn't, we would have just another lovely romantic comedy on our hands. The scene comes off beautifully.


On St. Patrick's Day, I have a tradition.  Every March 17th, I watch The Quiet Man, the 1952 film starring John Wayne, Maureen O'Hara and Barry Fitzgerald.  Although I am not a big John Wayne fan, I like his performance in this romantic comedy/drama, perhaps because it's a departure from his usual cowboy role.  As for Maureen O'Hara, she is wonderful as his love interest, the feisty, red-headed Mary Kate Danagher.  Wayne and O'Hara made five movies together over the years, including Rio Grande (1950), and they had great on-screen chemistry.

The Quiet Man is an unabashedly sentimental and nostalgic tribute to the Emerald Isle, filled with almost every Irish stereotype imaginable.  It spoofs those stereotypes in a good-natured and comical manner.  It's a long movie, over two hours, with Wayne as Sean Thorntorn, the American from Pittsburgh, who returns to the land of his birth, and O'Hara's as the strong-willed and fiery Mary Kate.  Their romance and Sean's painful past, provide the background for the film.  As the story unfolds, the couple must face several bumps along the road to happiness.

Thornton, a former boxer, is captivated by the mercurial Irish lass but, unfamiliar with Irish customs, he doesn't understand Mary Kate's desire to have the dowry denied her due to her brother, bombastic landowner "Red: Will.Danagher (Victor McLagden). Will initially disapproves of Sean's involvement with his sister because Sean outbid him for the land adjacent to his property and he sneeringly refers to the Irish-born American as "Yank."  He finally approves of the marriage after being tricked by several of the locals into believing that the town's wealthy widow wants to wed him provided that Mary Kate leaves the house.  After learning the truth at Sean and Mary Kate's wedding, Will angrily refuses to give his sibling her full dowry.   Meanwhile, Mary Kate is unaware that Sean caused the death of an opponent in the boxing ring and that he is haunted by the tragedy. 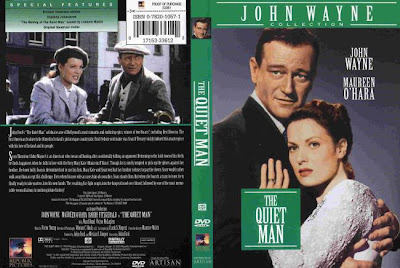 The Quiet Man, is based on a 1933 Saturday Evening Post short story by Maurice Walsh entitled Green Rushes.  Directed by John Ford and distributed by Republic Pictures, the film takes place in the 1920s and is set in the fictional Irish village of Innisfree. The name of the village was inspired by the song "Isle of Innisfree" about an exile reflecting nostalgically on his Irish home.  The movie, however, was actually filmed in the village of Cong in County Mayo in the summer of 1951.  It was shot in technicolor and the lush Irish countryside is strikingly beautiful.  The pastoral greenery alone is worth viewing.

Cong is located on an island surrounded by streams.  One of Ireland's most renowned hotels, Ashford Castle, can be found in Cong.  Ashford Castle was built by the Guinness family and much of The Quiet Man was filmed on its grounds.

Cong is also home to The Quiet Man Cottage and Museum.  The ground floor of the thatched-roof cottage is an exact replica of the "White-o-Mornin'" Cottage that Mary Kate cherished so much in the movie. In 2011, people from all over the world converged on the village for a festival celebrating the 60th anniversary of the filming of The Quiet Man.

* Maureen O'Hara (birth name Maureen FitzSimons) was born on August 17, 1920 in the Dublin suburb of Ranelagh.  During an appearance on Larry King Live, she told host Larry King that she plans to live until the age of 102.  In 1999, O'Hara was selected to be the grand marshal of New York City's St. Patrick's Day Parade.  She is now 92 years old.and resides in County Cork, Ireland. After the death of her third husband, Charles F. Blair, in a plane crash in 1978, Maureen decided to make Ireland, rather than Hollywood, her main base.  She settled in the picturesque village of Glengarriff on Bantry Bay in West Cork. O'Hara has one child, a daughter named Bronwyn, who is the mother of her only grandchild, Conor.  Both Bronwyn and her son live in the United States.

Sadly, Maureen was terribly shaken last year by a dispute with her trusted personal assistant, Carolyn Murphy, over control of the film star's foundation.  In July of 2012, accompanied by her lawyer and her grrandson, Conor, she announced that Murphy no longer had power of attorney over her affairs.  She stated that she was "heartbroken" over the matter.

*  Barry Fitzgerald, who played Michaeleen Oge Flynn, the local taxi driver, bookmaker and matchmaker in The Quiet Man, died in Dublin, Ireland on January 14, 1961.  The leprechaun-faced actor was 72 years old at the time of his death.  Fitzgerald (born William Joseph Shields) won an Academy Award for Best Supporting Actor for his performance as "Father Fitzgibbon" in Going My Way (1944).

* Victor McLaglen, who portrayed Mary Kate's brother, "Red" Will Danagher, was an English boxer and World War I veteran who became a successful actor.  McLagden died of a heart attack in California on November 7, 1959.  He was 72 at the time of his passing.

* The five films John Wayne made with Maureen O'Hara are Rio Grande (1950), The Quiet Man (1952), The Wings of Eagles (1957), McLintock (1963) and Big Jake.(1971). Three of the films, Rio Grande, The Quiet Man and The Wings of Eagles, were directed by John Ford.  It is also interesting to note that
Big Jake, a comedy Western, was directed by Andrew V. McLagden, son of Victor McLagden.