Lament for a White Christmas! 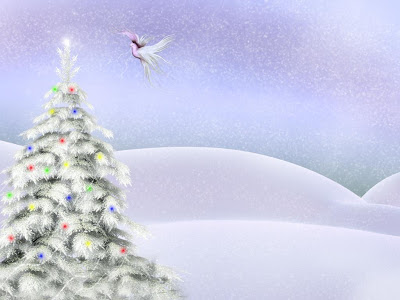 - From the song "Let it Snow"
Created by lyricist Sammy Cahn and the composer Jule Styne in 1945.


As I write this, it is December 20th, less than a week before Christmas.  I live in Toronto, the most populous city in the so-called Great White North.  We have not had a snowfall of any significance so far, only a few light flurries.  I know!  I know!  Many of you will say we have been fortunate not have had to shovel the white stuff or drive in a snow storm.  For me, however, it just doesn't seem right.  It doesn't seem natural.  I have never celebrated Christmas in a place with a warm or tropical climate.  To me, Christmas is associated with the start of the winter season - and that means snow!  Those of you who live in the Southern Hemisphere (Hello all you Aussies out there!) feel differently, of course, and I completely understand.  You live in a different climate with a different culture and different Yuletide traditions.

There are many Canadians who prefer to spend the holiday season in Florida.  I'm just not one of them.  I'm not dreaming of a green Christmas or a wet Christmas.  I'm only dreaming of a white Christmas.  When its Christmastime, I want to be in hockey country.  Ooops!  We don't even have the Toronto Maple Leafs to disappoint us again this year - not with that disgusting NHL lockout dragging on.  Alas, there is no snow in Canada's largest hub and no Leaf games to cause us endless frustration.

The definition of a "white" Christmas varies from country to country.  In some countries, it simply means that the ground is covered with snow.  Here in Canada, the definition is more precise.  Environment Canada, a government agency, officially defines a "white" Christmas as one in which there is at least two centimetres (O.79 inches) on the morning of December 25th at 7:00 a.m.  In the United States, the official definition of a "white" Christmas is even stricter.  There must be a snow depth of at least 2.5 centimetres (one inch) at 7:00 a.m. local time on Christmas morning.  In the United Kingdom, according to the British Met Office (the U.K.'s national weather service) and British bookies, snow has to be observed falling (even if it is a small amount and even if it melts before it hits the ground) in the 24 hours of December 25th.  Northern Scotland is the most likely place to see a white Christmas in the U.K.

With milder winters due to climate change, Christmas in Canada and elsewhere in the Northern Hemisphere, is becoming less snowy as the years pass. Environment Canada issues a white Christmas probability forecast every year based on historical records and climate data it has kept since 1955.  According to the agency's statistics, the chances of a white Christmas have been continually dropping.   As winters become milder due to climate change, it is no surprise that Christmas has become less snowy through the years.  The chances of a white Christmas in Toronto this year are very low.  We haven't had one in this city since 2008.

The reality is that this year, only about 25 per cent of the Canadian populace will be waking up to a winter wonderland on Christmas Day,  mostly residents of Alberta, Saskatchewan, Manitoba and the sparsely populated northern regions. According to Environment Canada, there's a 100 per cent chance of  snow in Goose Bay, Iqaluit, White Horse and Yellowknife.

Here are the facts, according to Environment Canada.  In the 1960s, 1970s and 1980s, on average there was an 80 per cent chance of having snowfall on Christmas Day.  The odds of this happening now have plummeted to 65 per cent.in the last twenty odd years.  Our current government, headed by Prime Minister Stephen Harper, is not concerned about the environment and does not take climate change seriously.  His government has been relentless in relaxing environmental regulations.  Perhaps if there were no snow in Calgary in the winter, he'd have a better understanding of what's been happening.  It is highly unlikely there won't be any snow on Christmas Day this year in Toronto, the city of Mr. Harper's birth.

Although I'm a Canadian, I'm starting to understand how Irving Berlin felt when he wrote "White Christmas" amid the palm trees of balmy California back in the 1940s.   I'm not pining for a terrible snowstorm.  I'm just feeling wistful for treetops that glisten and sleigh bells in the snow.  I'll leave the last word to Environment Canada's David Phillips.

It's one of the things where we're seen united as Canadians, in wanting it to be a white Christmas.  We want it on that day to put us in the mood.  It's almost like (having) turkey and toys.  It's just part of the feeling at Christmastime.