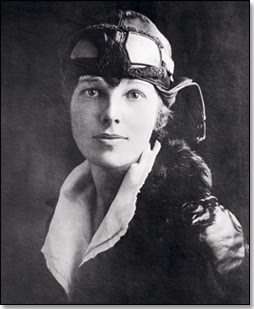 Yesterday was the 115th anniversary of the birth of the great American aviation pioneer, Amelia Earhart.  She was born on July 24, 1897 in Atchison, Kansas.  Amelia disappeared on July 2. 1937 over the South Pacific while en route to uninhabited Howland Island..  She was accompanied on the flight by her navigator, Fred Noonan.  The duo set forth from Papua, New Guinea in an attempt to circumnavigate the globe along an equatorial route.  They never reached their destination and the wreckage of their twin-engine Electra 10E aircraft is yet to be found.

I am intrigued by the mystery surrounding Amelia's disappearance and I have been following the the most recent attempt to determine her fate.  Earhart was the first women to fly solo across the Atlantic Ocean and I've long admired her spunk and her adventuresome spirit.  That is why I have written about her in two previous postings on this site: "The Disappearance of Amelia Earhart"  (January 29, 2011) and  "Amelia Earhart and reflections on courage" (February 24, 2011).

On July 3, 2012, a group of scientists set off on a $2.2 million expedition to a remote island in the Pacific.  The group, known as The International Group for Historic Aircraft Recovery (TIGHAR), travelled 2,897 km (1,800 miles) by sea from Honolulu, Hawaii to the island of Nikumaroro in the Republic of Kiribati.  Their mission was to find some clues to Amelia's fate and to uncover the  wreckage of her plane in the waters surrounding the island.

The expedition, however, was called off yesterday and the research team returned to Hawaii without locating the missing plane.  It was cut short five days early.  Ric Gillespie, TIGHAR's founder, said that the searchers had faced "nightmare terrain" and that there had been some accidents with equipment.  Gillespie's wife, Tighar president Pat Thrasher, was quoted in a BBC report as saying, "It's not like an Indiana Jones flick where you go through a door and there it is.  It's not like that - it's never like that."

Although the outcome of the expedition was disappointing, the scientists were able to discover some useful information.  They collected video and sonar data which they were expected to begin analyzing during their voyage back to Hawaii.  The research team remains undaunted.  In fact, according to the BBC, they are planning a return trip next year to Nikurmaroro, the remote island where they believe Earhart and Noonan survived for a period.

While many experts subscribe to the theory that Amelia's plane ran out of fuel due to a navigational error, .  Tighar believes that she and Noonan may have been castaways for awhile.   During previous TIGHAR expeditions to Nikmaroro, bottles and other artifacts have been discovered that may have belonged to Earhart and Noonan, including a jar of what is thought to be anti-freckle cream.  Joe Cermiglia, a TIGHAR researcher, has said, "It's well documented that Amelia had freckles and disliked having them."

Broken shards and many glass containers have been recovered from the archaeological site on the southeast end  Nikumoraro.  The partial skeleton of a castaway was found there in 1940, but the bones and artifacts found in 1940, have been lost.  The evidence strongly points to the presence of castaways on the island.  Yet it still has not been proven conclusively that Amelia Earhart and Fred Noonan.  The 75-year-old mystery continues.  Stay tuned!

EDITOR'S NOTE  In August, it was reported that TIGHAR researchers may have found Amelia Earhart's plane debris. Due to technical difficulties, they were unable to see high definition images until late July.  When they looked at the high definition images, they discovered what appears to be a wheel and other landing gear off the coast of Nikurmaroro Island.  Click on the link below to watch videos and read ABC news stories about the latest discovery.