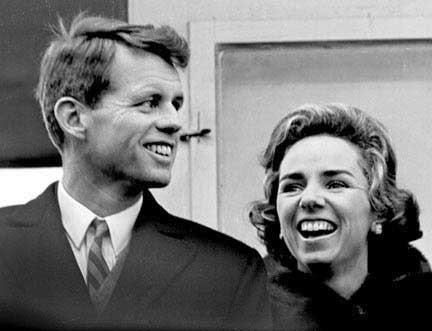 In the winter of 1945-46, Ethel Skakel was a 17-year-old student at Manhattanville College of the Sacred Heart in Manhattan, New York.  Jean Kennedy, her college friend and roommate, invited Ethel on a ski trip to the Mont-Tremblant Resort in Quebec, Canada for the Christmas holidays.  It was there that she was introduced to Jean's older brother, Robert Kennedy, a young man in the V-12 Navy College Program.  Bobby, as he was known, was to enter Harvard University in September of 1946.  He was two and a half years older than Ethel.

Their meeting was not a case of love at first sight.  Bobby liked Ethel but, at the time, he was dating Ethel's sister, Patricia.  Ethel, for her part, seemed more interested in Bobby's older brother John.  She had worked for John F. Kennedy during his 1946 congressional campaign and she had also written her college thesis on JFK's book Why England Slept.

Here's how Arthur M. Schlesinger describes Bobby and Ethel's early relationship in his book Robert Kennedy and His Times:

Robert liked Ethel and, after the 1946 congressional campaign, invited her occasionally to Cambridge.  But he took out her older sister Patricia even more.  In his senior year, when Robert invited Pat Skakel to Palm Beach, Ethel managed an invitation for herself from Jean.  Ethel attracted him by her high spirits and proficiency in sports.

Bobby eventually began seeing Ethel more frequently and called on her at Manhattanville College.  She visited him in Charlottesville, Virginia where he was attending the University of Virginia Law School.  By 1949, according to Schlesinger, they were "enthusiastically in love."  Ethel, a devout and pious Catholic, however, considered becoming a nun rather than marrying.  Schlesinger writes, "Robert, walking along the beach at Hyannis Port, said diconsolately to his sister Jean. "How can I fight God?"

In the end, Ethel chose marriage.  She and Robert Kennedy became engaged in February of 1950 while Bobby was still in law school.  His mother, Rose, said she had misgivings about that, but not about Ethel.

The wedding took place on June 17, 1950 at St. Mary's Catholic Church in Ethel's hometown of Greenwich, Connecticut.  Bobby's older brother, John, served as best man.  It was a lavish affair with a large number of guests and, after a reception at the Skakel's home, the newlyweds departed for a honeymoon in Hawaii. 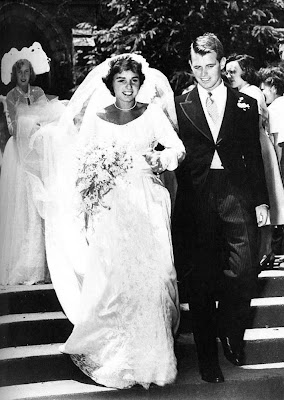 The first of Bobby and Ethel's 11 children, a daughter named Kathleen, was born on July 4, 1951.  After Robert graduated from the University of Virginia with his law degree, the family moved to the Washington, D.C. area.  Robert Kennedy was employed by the U.S. Department of Justice.  In 1955, Ethel's parents, George and Ann Skakel, when their private plane crashed in 1955.  Ethel's brother, George, also did in a plane crash in 1966.

Bobby and Ethel welcomed their second child, a son named Joseph Patrick Kennedy II, on September 24, 1952.  Another son, Robert Francis Kennedy, was born on January 17, 1954.  David Anthony  followed on June 15, 1955,   In 1956, Bobby and Ethel purchased Hickory Hill from John and his wife Jackie.  They raised their ever-growing family in the sprawling home located in Mclean, Virginia.

During the presidency of his brother John, Bobby Kennedy served as U.S, Attorney General.  After John's assassination in Dallas in 1963, Bobby was next in line to carry on the Kennedy legacy.  In 1964, he was elected to the United States Senate for the state of New York.

Senator Robert F. Kennedy was assassinated in June of 1968 during his run for the American presidency.  His wife Ethel was pregnant with their 11th child when he was killed.  Their daughter, Rory Elizabeth Katherine Kennedy, was born on December 12, 1968.  Ethel remained at Hickory Hill until 2009 when the estate was sold for $8.25 million.  She is now 83 years old and leads a quiet life away form the spotlight.

To view photos of Bobby and Ethel Kennedy, click on the link below.

http://www.youtube.com/watch?v=qpHigrmjmRc
Posted by Joanne at 2:53 PM